Little sense of joy to be found in Lebanon this Christmas 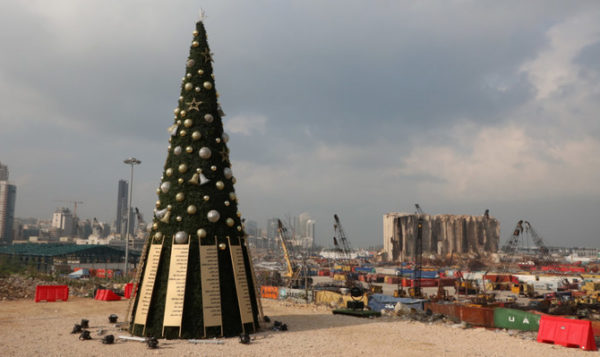 “The revolution did not achieve any of our ambitions and then the blast at Beirut’s port happened, which revealed the extent to which our state is corrupt,” says Beirut resident Joelle Daniel. (Reuters)
Share:

Christmas arrives in Lebanon this year accompanied by several crises.

The streets and markets have been packed with last-minute Christmas shoppers in recent days but this is not a sign of an improving economy or a sense of joy among the people. Instead it reflected a desperate search for the cheapest possible shopping options.

Salaries in Lebanon lost about 80 percent of their value this year against the dollar. They can no longer cover even the costs of basic necessities, the prices of which have skyrocketed, so how can they possibly pay for festive “luxuries” such as gifts for children and a hearty Christmas dinner?

“100,000 Lebanese pounds ($66) is not enough to buy laundry detergent, toothpaste and shampoo,” said Souad, a resident of Forn El-Chebbak in the southern suburbs of Beirut. “So, how can a person whose salary was LBP800,000 pay for the remaining basic necessities of life, along with food and drink?

“I am trying to convince my children to be satisfied with just one gift this year. We have to make do with what we have — and we do not think that next year will be any better.”

Toys and gifts for children that cost about LBP20,000 before the currency’s collapse now cost LBP120,000 or more. Meanwhile the prices of imported toys from well-known foreign brands have increased from LBP45,000 to LBP250,000.

The costs of gifts for adults are even more prohibitive — a good-quality pair of shoes that used to sell for up to LBP300,000 now costs more than LBP1 million.

“There is a weekly decline affecting our business, which has reached almost 90 percent,” said Ghassan, who owns a jewelry store. “A person who used to be able to buy a necklace for $200, or LBP300,000, a year ago now has to pay LBP1.6 million, which is three times the country’s minimum wage.”

While the threat to health from the coronavirus crisis should not be trivialized, the pandemic might to some extent prove to be a financial blessing in disguise in Lebanon, as families will be able to reduce the cost of Christmas meals by avoiding large family gatherings.

Expensive meats, extravagant deserts and imported cheeses will be absent from most festive tables this year. A charcuterie plate containing 200 grams of three types of cheese and a selection of processed meats now costs LBP350,000, compared with LBP60,000 last year.

Turkey, a Christmas-dinner tradition in Lebanon, used to cost an average of about LBP150,000 in a restaurant. Now the price of a cooked turkey delivered to your home is at least LBP750,000 — and could be as high as LBP1.3 million depending on the side dishes ordered with it.

As for sweet treats for dessert, the price of a kilogram of high-quality chocolate now exceeds LBP120,00, while a luxury Christmas cake can cost as much as LBP1 million.

“This year’s Christmas celebrations are different as there are no foreign meals on the tables or imported gifts,” said Beirut resident Joelle Daniel. “We are buying local products and focusing on educational children gifts manufactured by Lebanese designers.

“Everyone is suffering economically and we have to make do with what we have. This year was a bad one and we do not think that 2021 will be any better. My family and I have started to prepare our immigration papers because the economic, social and political situation (in Lebanon) is very dire.

“The revolution did not achieve any of our ambitions and then the blast at Beirut’s port happened, which revealed the extent to which our state is corrupt.”

Many of those who already left Lebanon in search of a better life abroad have returned to the country to spend Christmas with their families. In the past few days more than 7,000 people have come back to Beirut for the holidays, and more than 8,000 have arrived since the start of the month. But the visitors are unlikely to bring much seasonal good cheer for struggling businesses.

“The economic activity that has accompanied the holidays has had a limited effect,” said Ghassan Abou Jaoude, who owns a clothes shop near the Palace of Justice in Beirut. “When the holidays are over, every merchant will have to compare his losses and profits and will find that staying at home is less costly than accumulating more debts.

“This is because people simply no longer have money, while all of our political leaders have abandoned their people, prefer to obey the wishes of foreign powers and refuse to make any concessions in the face of such fateful national issues.”