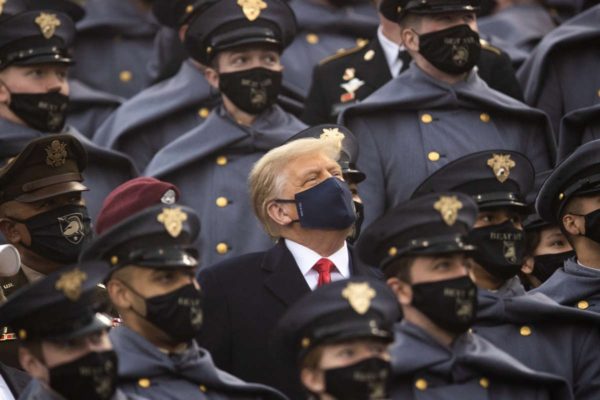 By Martin Pengelly in New York and agencies

Donald Trump’s flirtation with declaring martial law in battleground states and appointing a conspiracy theorist as special counsel to help his attempt to overturn defeat by Joe Biden are “really sad” and “nutty and loopy”, Mitt Romney said on Sunday.

“He’s leaving Washington with a whole series of conspiracy theories and things that are so nutty and loopy that people are shaking their head wondering what in the world has gotten into this man,” the Utah Republican senator said.

Joe Biden won the 3 November election by 306-232 in the electoral college and leads by more than 7m ballots in the popular vote. Nonetheless, Trump is entertaining outlandish schemes to remain in office, egged on by allies like former national security adviser Michael Flynn, who Trump pardoned for lying to the FBI, and former New York mayor Rudy Giuliani, the president’s personal attorney.

During a Friday meeting at the White House first reported by the New York Times then widely reported elsewhere, Trump discussed security clearance for Sidney Powell, a conspiracy-spouting attorney who was cut from Trump’s campaign legal team.

It was unclear if Trump would actually attempt to install Powell as a special counsel, a position appointed by the US attorney general, not the president. Numerous Republicans, from outgoing attorney general William Barr to governors and state officials, have said repeatedly there is no evidence of the voter fraud Trump alleges.

“It’s not going to happen,” Romney told CNN. “That’s going nowhere. And I understand the president is casting about trying to find some way to have a different result than the one that was delivered by the American people, but it’s really sad in a lot of respects and embarrassing.

“Because the president could right now be writing the last chapter of this administration, with a victory lap with regards to the [Covid-19] vaccine. After all he pushed aggressively to get the vaccine developed and distributed, that’s happening on a quick timeframe. He could be going out and championing this extraordinary success.

“Instead … this last chapter suggests what he is going to be known for.”

Trump’s campaign and allies have filed around 50 lawsuits alleging voting fraud – almost all have been dismissed. Trump has lost before judges of both parties, including some he appointed, and some of the strongest rebukes have come from conservative Republicans. The supreme court, which has a 6-3 conservative majority and three Trump appointees, has refused to take up cases.

During the Friday meeting, Giuliani pushed Trump to seize voting machines. The Department of Homeland Security (DHS) made clear that it had no authority to do so. It is unclear what such a move could accomplish.

Barr told the Associated Press this month the Department of Justice and DHS had looked into claims voting machines “were programmed essentially to skew the election results … and so far, we haven’t seen anything to substantiate that”. Paper ballots have been used to verify results, including in Georgia, which performed two audits of its vote tally, confirming Biden’s victory.

Flynn went yet further, suggesting Trump could impose martial law and use the military to re-run the election. Chief of staff Mark Meadows and White House counsel Pat Cipollone voiced objections, people familiar with the Friday meeting told news outlets. Trump, who spent much of the weekend tweeting and retweeting electoral fraud claims, responded on Twitter.

John Bolton, a successor to Flynn as national security adviser, told CNN the martial law idea was “appalling” and said Trump was “incompetent”. Trump responded: “What would Bolton, one of the dumbest people in Washington, know?”

Trump maintains a secure grip on the Republican party, seemingly guaranteeing challenges to the electoral college result in Congress on 6 January. Such objections will be for political ends and will not in all likelihood succeed in overturning the election result. Democrats hold the House and Senate majority leader Mitch McConnell has indicated he will knock down challenges in the Senate.

On Sunday, Trump called Georgia senator David Perdue – up for re-election in one of two crucial runoffs in January – “a great guy and patriot” for apparently planning to lodge a challenge himself.

On NBC’s Meet the Press, Romney, who did better at the polls in his 2012 defeat by Barack Obama than Trump did in 2016 and 2020, was asked if his party could ever escape Trump’s grip.

“I believe the Republican party has changed pretty dramatically,” he said. “And by that, I mean that the people who consider themselves Republican and voted for President Trump I think is a different cohort than the cohort that voted for me.

“…You look at those that are thinking about running in 2024, [they are] trying to see who can be the most like President Trump. And that suggests that the party doesn’t want to take a different direction.”

Josh Hawley of Missouri, Tom Cotton of Arkansas and Ted Cruz of Texas are among senators thought likely to run to succeed Trump in the White House – should he not run himself – and therefore likely to challenge the electoral college result.

On Sunday, the website Axios reported that Trump has abandoned plans to announce his own candidacy for 2024 before Biden is inaugurated, “because it would show his base he’s given up his fight” to overturn this year’s result.

“I don’t think anyone who’s looking at running in 2024 has the kind of style and shtick that President Trump has,” Romney said. “He has a unique and capable politician … But I think the direction you’re seeing is one that he set out.

“I’d like to see a different version of the Republican party. But my side is very small these days … I think we recognise that character actually does count.”