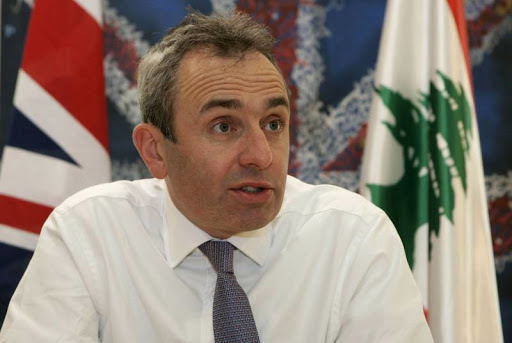 In an editorial published on British embassy Facebook page , British Ambassador to Lebanon Chris Rampling who is moving back to the UK at the end of his term , wrote the following OPED in which he decries the lack of responsibility of Lebanese leaders blaming them for the August 4th devastating explosion of Beirut Port ” as home-grown” . He said some things are rotten in Lebanon , calls “Kefala” a disgrace on Lebanon’s reputation, and said freedom of expression has been under pressure, as Lebanon used to be the regional leader on freedoms and human rights, but it has become a country that takes one step forward, and two back. He stressed that the Lebanese people deserve better

Lebanon has changed so much since I arrived, and especially over the last 14 months. My wife and I, and our 2 young children, touched down in 2018 with great expectation. Before coming, I had heard Yasmine Hamdan sing ‘Beirut’ in London and knew I was coming to the most fascinating city on the planet (I still think that).

But now Lebanese eyes tell of sadness; their words, of despair. Almost half the workforce is unemployed, and more than half are in poverty, with the UK’s Middle East Minister warning 2 weeks ago of a humanitarian tsunami. Many families have become separated, and talent and skills are emigrating in numbers. At night, the cities are darker. In more ways than one.

During my farewell meetings, there has been much reflection on the confluence of crises. Neither the refugee nor COVID crises were of Lebanon’s making. But the economic crisis and the 4 August blast were home-grown. And on top there is a profound political – and a growing social – crisis, out of which I have not seen evidence that Lebanon has the system or the leadership to chart a path. When given a roadmap and a promise of desperately-needed investment in 2018 and then again this year, the leaders did not take up the mantle of responsibility.

Everyone is tired, but I hope no-one stops fighting for the Lebanon they want. I have met wonderful people here: change agents, those going to study in the UK, many creative businesspeople, good-hearted public servants. But some things are rotten: Kefala for example is a disgrace on Lebanon’s reputation, and freedom of expression has been under pressure. Lebanon used to be the regional leader on freedoms and human rights, but it has become a country that takes one step forward, and two back.

Some of our traditional foes may accuse me of interference. But Lies and I love Lebanon and I will miss our Lebanese friends: Sunni, Shia, Maronite, Druze, Armenian, Catholic, etc. This is the 5th Arab country in which we have lived, and the one in which we and our children have made ourselves most at home. And I do see sources of hope. Entrepreneurship and the openness of the Lebanese people are tired clichés, and resilience is not what it was. But all remain.

More importantly, everything is now on the table. Politics will have to change, and ideas will fertilise that process. The energy of 17 October is only 14 months back, and most of those chanting for a better future remain. Your modern culture is still a reference point, with dynamic young people. But sectarianism has trapped political thinking. Success will require current and future leaders to move beyond reorganising the deckchairs. Going beyond existing groups.

Secondly, your diaspora remains your greatest strength. It is not a failed business model that Lebanese overseas want to invest: it should be a source of pride. But they are no longer doing so. Lebanon needs to rebuild its economic model (the IMF roadmap is the right one), and provide a sustainable and attractive framework. A new direction that includes industry, tech and tourism. Getting there needs more than a strategy: electricity has shown that the political compromises required for implementation are much more challenging. With a new national consensus and a focus on outcomes and planning, your own people would be able to join with your international friends in fuelling growth once again. Our UK-Lebanon trade deal can be at its heart.

And thirdly, the international community remains solidly united. I get told that France and the US pull in different directions. I don’t see that. They – and we, the UK – have the same analysis, the same conclusions, see the same opportunities and threats (eg your security institutions and education system need support). There are differences over the use of ‘the stick’, but there is more overlap than difference. The time to be anxious about our engagement is when we cease caring. Not when we seek to fill the irresponsible void.

Be clear that support for Lebanon is more difficult to sustain. The UK will continue to support security, education and the most vulnerable – we are enormously proud of all we have achieved with the LAF, in education and in supporting the poor over the last decade. But COVID means our money is tighter than ever – and that goes for our friends too. Lebanon must fight harder for the scarcer resources, and political paralysis does not make for an attractive destination. The credibility gap is your country’s greatest international problem.

I have not mentioned Hizballah, or the normalisation which is changing the region. Patriarch Rai is right to talk once again of neutrality. And no state that wants to be truly stable and secure can have organised arms outside state control, especially when they are being used outside its borders. Not making a choice is to do so.

Lebanon is a remarkable country whose people – you – deserve better. You deserve responsible, accountable and transparent leaders, public servants, financiers and business people. But this will not happen as an apple falls from a Bekaa tree. It must be worked for.

And my final call is to those leaders, public servants, financiers and business people. Your country has friends, and we care about your people. But you, not we, hold the tools of power. You – and most of all the leaders – will be remembered and judged for what you did at the time of greatest need.