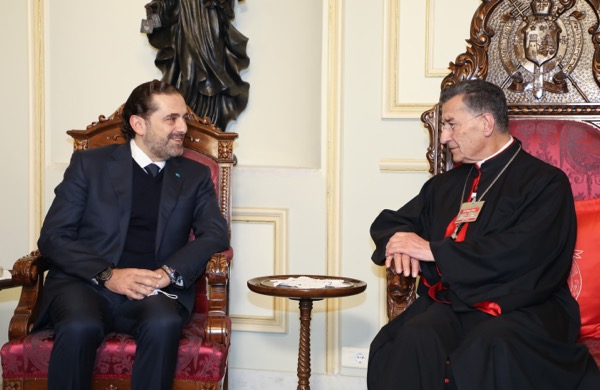 Prime Minister-designate Saad Hariri Wednesday told reporters after a 45-minute meeting with Maronite Patriarch Beshara al-Rai in Bkirki, north of Beirut, that the meeting focused on the Cabinet formation deadlock.

Hariri reaffirmed that the government he was striving to form would carry out reforms needed to halt the country’s economic collapse and rebuild Beirut following the massive Aug. 4 explosion that pulverized Beirut Port.

He stressed that his goal was not to become prime minister, nor to form just any government, but rather to stop the economic collapse and reconstruct Beirut after the port blast that damaged half of the capital, killed nearly 200 people, injured thousands and caused billions of dollars in material damage.

“I informed the patriarch about the Cabinet lineup that I had presented to the president which consists of nonpartisan specialists who have integrity and competence and are capable of carrying out the agreed-upon reforms,” Hariri said. He was clearly referring to a string of key reforms contained in the French initiative to rescue Lebanon from multiple crises that was presented to Lebanon’s political leaders by French President Emmanuel Macron during his second visit to Lebanon on Sept. 1.

Amid a growing political and judicial row over the ongoing investigations into the port blast, Hariri said: “On the subject of Beirut’s reconstruction, I assured the patriarch of our determination to know the truth. All the Lebanese, and first of all the victims and their families, have the right to know the full truth and responsibilities. In this context, no one will be covered, but things should happen in the full respect of the constitution and laws.”

Hariri’s remarks came as the Cabinet formation process has hit a dead-end days after he and President Michel Aoun aired their differences over the formation with each blaming the other for the delay in an unprecedented “war of words” that dashed hopes for the creation of a new government anytime soon.

After submitting his Cabinet lineup to Aoun last Wednesday, Hariri sounded upbeat about forming a new government soon to deliver reforms and rescue Lebanon’s crumbling economy. But Hariri’s optimism has since faded by a counter-Cabinet proposal presented by Aoun to Hariri on the same day. The president’s unprecedented move was viewed as a rejection of the premier-designate’s proposed Cabinet made up of 18 nonpartisan specialists.

“Aoun has not officially rejected Hariri’s proposed Cabinet lineup. In his Cabinet proposal outlining the distribution of portfolios among various sects, Aoun demanded that political parties be represented in the new government. He also demanded a veto power,” Lebanese media reported

Hariri, who staunchly rejects granting any party a veto power in the next government, implicitly blamed, Gebran Bassil, Aoun’s son-in-law, for the obstruction of the Cabinet formation. Hariri also disclosed that Aoun wanted a government in which all political parties are represented, which runs contrary to the premier-designate’s decision to exclude representatives of those parties.

Implementation of long-overdue reforms is deemed essential to releasing billions of dollars in promised international aid to the cash-strapped country, which is facing an economic meltdown and a collapsing currency that has lost more than 80 percent of its value since last year, putting over half of the 6 million population below the poverty line.

An exchange of statements issued by their media offices Monday reflected tensions and a wide gap between Aoun and Hariri over the shape and makeup of the next government.

French president Emanuel Macron’s planned third visit on Dec. 22-23 presented the only hope of a breakthrough, but unfortunately he canceled his visit to Lebanon after testing positive for coronavirus

Lebanon has been without a fully functioning government since Aug. 10 when then-Prime Minister Hassan Diab’s government resigned in the aftermath of the port explosion, although it stayed on in a caretaker capacity..

Macron was the first foreign leader to visit Beirut two days after the port blast. Following the blast, Macron led efforts to get Lebanese politicians to agree on a new government to enact reforms. But Lebanese leaders have failed to deliver reforms.

In addition to inspecting French troops serving with the UN peacekeeping force in south Lebanon, UNIFIL, Macron was expected to meet again with Lebanon’s rival political leaders to press them to agree on the swift formation of a “mission” government to enact reforms.