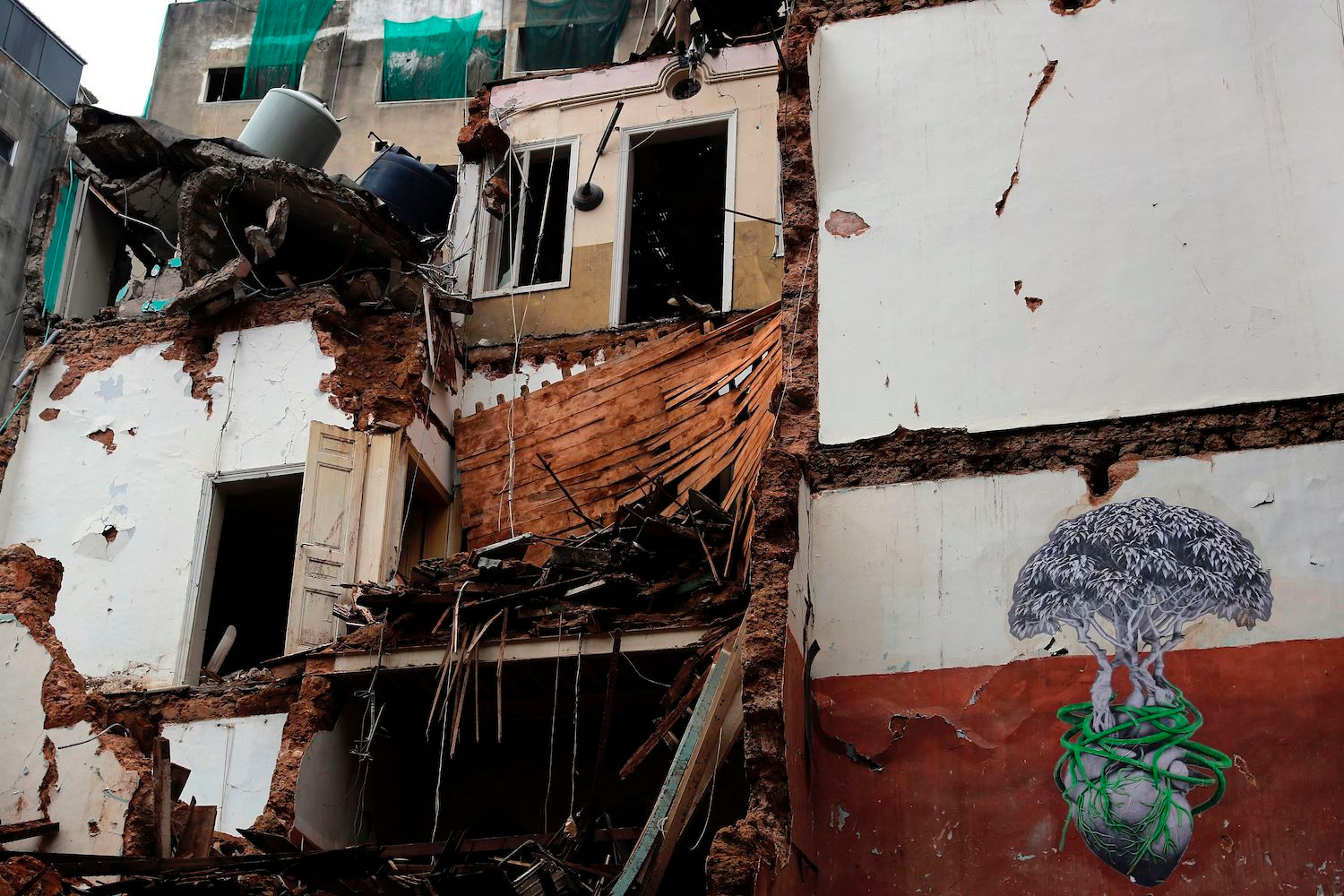 This picture shows a view of a building damaged by the August 4 port blast, in the Lebanese capital Beirut’s Gemayzeh neighbourhood on November 5, 2020. – Beirut’s August 4 disaster, which authorities say was caused when a huge stockpile of ammonim nitrate fertiliser caught fire years after it was impounded at the port, killed more than 200 people and damaged or destroyed around 70,000 homes. The country’s worst peace-time tragedy rendered entire districts unrecognisable. Now winter rains are adding to the destruction. (Photo by JOSEPH EID / AFP) (Photo by JOSEPH EID/AFP via Getty Images)
Share:

BEIRUT—Even after decades, the international community still has not quite figured out what makes Lebanese politicians tick. Potential donors focus on economic mismanagement and political will, but gloss over the shady commercial interests that keep sectarian leaders popular.

When Saad Hariri, one of Lebanon’s most controversial politician-businessmen, returned to the position of prime minister in October—one year after protests forced his government to resign—it signaled a depressing return to business as usual.

Like outgoing U.S. President Donald Trump, Hariri inherited a business empire from his real-estate tycoon father and is not afraid of mixing business and politics. Also like Trump, Hariri and Lebanon’s other sectarian leaders enjoy supporter bases of Trumpian fervor. He’s not alone. Since the Lebanese civil war, the country’s leaders have fused politics and commerce, abusing their positions to buy their supporters’ loyalty. Business cartels with political connections leech off government subsidies, filch lucrative state assets, and wildly overcharge for basic products and services. Rank-and-file loyalists also benefit from corrupt patronage networks, financially tying even more constituents to their leaders.

Now that Lebanon is enduring its worst recession in decades, and recovering from a devastating explosion, new economic pressures are forcing Lebanon’s cartels to do anything to survive—except change their spots. The Lebanese public and the government are increasingly broke, leaving corrupt elites with fewer pockets to pillage. Business cartels are accepting short-term concessions to avoid lasting reform, in the hopes of reactivating stagnant patronage networks in the future.

After three decades of exploitation, Lebanese consumers rarely expect value for money. Most shrug their shoulders at daily power outages, water shortages, and some of the region’s most expensive phone bills.

The institutionalized racket extends deep into the private sector, where oligopolies preside over cartels in everything from bottled water to potato farming. But even Lebanon’s rapacious politico-business elites cannot ignore the current economic meltdown, which has decimated consumer spending power.

This year—for the first time in a generation—the Lebanese started paying reasonable prices for one of the cartels’ darling money-spinners: cement. Politicians and their associates control Lebanon’s only three cement production companies, Cimenterie Nationale S.A.L., LafargeHolcim Ltd, and Ciment De Sibline S.A.L. And since the 1990s, prohibitive tariffs have effectively excluded foreign competition, forcing consumers to buy wildly overpriced Lebanese cement. But in August, Lebanon’s cement providers agreed to drop their prices to around $30 per tonne. That was a marked drop from the previous $100 per tonne, about three times the global market rate, and in line with the rates the businesses charged abroad. The country’s caretaker government had successfully threatened to lift tariffs on cement imports to secure the cartel’s compliance with a cement price ceiling, according to Alain Bifani, the Ministry of Finance’s former director-general, said in November. Bifani regards this policy as one of the “small successes” of Hassan Diab’s short-lived administration.

Unfortunately, not everyone is so optimistic about the new cement-price ceiling. The agreement continues on a month-to-month basis only—and resistance in one of Lebanon’s most anti-competitive industries is strong. “When push came to shove, [the cartel] lowered their prices. But they made it very difficult for the government and resisted as much as they could,” explained Nafez Zouk, lead economist and emerging markets strategist at Oxford Economics, in a November interview.

In return for the price ceiling, moreover, the cement industry also managed to preserve the tariff regime which, had it been removed, might provide actual competition. In other words, the cartel may be accepting lower prices for now, but market conditions remain in place for the cartel to exploit the Lebanese people once more.

Public coffers are another trusty source of revenue for Lebanese cartels, helping to grease the machinery of sectarian political patronage. In particular, opaque bidding processes have long awarded massively overpriced contracts for public services, such as waste management, to favored companies. “We have seen in many sectors that [politicians] always introduce middle men for [state] contracts,” Bifani added. In other cases, politicians approved meaningless “ghost jobs” that let their supporters draw a wage for doing virtually no work.

But now, the bountiful tap of public funds has almost run dry. As the state faces the world’s third highest debt-to-GDP ratio, again Lebanon’s cartels will need to adapt. Fuel—an import needed to keep the lights on—is one example of a lucrative racket under threat. With fuel subsidies set to end imminently, fuel importers will have to retreat into survival mode.

Much like cement, three companies allegedly connected to sectarian leaders control fuel imports to Lebanon. They’ve historically been allowed to act as exclusive middlemen between the government and fuel exporting countries. The sector’s tight oligopoly is very lucrative for those involved, explains Jessica Obeid, an independent energy policy consultant. “How the contract is made, that is a big question mark, but they definitely make a high cut [from the Lebanese market],” said Obeid in November.

But now, with foreign currency reserves dangerously low, these importers are about to lose this golden goose. In the short term, Obeid predicts that the fuel importing cartel will bear losses in the hope that they can remake the profits like usual in the future. “I hope that the government will allow more competition to exist [in the fuel market]. But it is dependent on so many uncertain factors—the main one being when the foreign reserves run out,” she said.

Attempts to untangle the Lebanese economic knot are stalled. In late November, the central bank’s continued obstruction of a forensic audit led Alvarez & Marsal, an international restructuring consultancy, to quit its contract in desperation. Completion of the audit is a central demand of international donors looking to bail Lebanon out. Without it, and a raft of other reforms, Lebanon risks losing its tens of billions of dollars in aid from the International Monetary Fund (IMF) and donor nations.

In short, Lebanon’s political figures appear uninterested in fixing the economy, which would mean giving up their own enrichment. Yet new economic realities are destabilizing some cartels on their own. A crumbling local currency could address Lebanon’s unhealthy addiction to imports, which are already down about 50 percent compared to last year. In rural Lebanon, a lack of foreign currency is shaking the foundations of a well-established potato cartel, which has long exploited small-scale farmers.

Sectarian leaders are evidently at their lowest political popularity in decades, even facing mock public executions after August’s catastrophic explosion in Beirut. But their financial troubles could prove much more damaging. Leveraged correctly, donors could finally wean politicians off their unethical revenue streams and force-feed them genuine reform, starting with a proper competition law and authority that ensures a level playing field for all businesses. Successive governments have failed to deliver this basic legislation, because it would allow competitors to compromise their cherished cash cows.

Bifani believes anything short of a full-scale economic overhaul would squander a unique bargaining position. “[Hariri] will be tempted to do a deal with the IMF, probably for the lowest amount accompanied by the lowest reforms,” he said. “This would be a disaster because it is a lost opportunity for change.”

Reeling from heavy political and economic hits, Lebanon’s sectarian leaders are on the ropes. But as long as their business fiefdoms remain intact, they won’t throw in the towel.

Jacob Boswall is a journalist and economic researcher. Twitter: @Boswall_Jacob

David Wood is a journalist and economic researcher.