Time names Biden, Harris as 2020 Persons of the Year 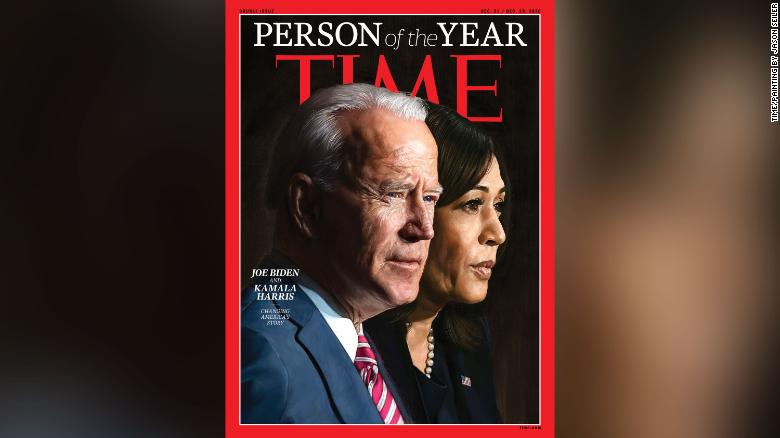 The award was announced by singer-songwriter Bruce Springsteen at the end of an hour-long NBC special.

Annually since 1928, the weekly news magazine has recognized an individual or group the country believes has had “the greatest influence on the events of the year — for better or worse.” The award was originally called Man or Woman of the Year but was changed to Person of the Year in 1999.

This year’s winning team came from a field of 80 nominees, which was pared to the finalists.

Greta Thunberg, the Swedish schoolgirl who inspired a global movement to fight climate change, was named Time’s Person of the Year in 2019.

President Donald Trump, who was Time’s Person of the Year in 2016, was named a finalist this year even though he was not reelected. He was considered because he maintains control of the Republican Party and captured the most votes by a losing candidate in a presidential election.

Movements for racial justice was chosen in the wake of the deaths of George Floyd, Ahmaud Arbery, Breonna Taylor and Daniel Prude. Felsenthal said the deaths inspired what he called some of the largest protests the country, with up to 10% of the population in some areas marching for justice.

Anthony Fauci and front line workers were chosen as finalists because the coronavirus pandemic was a once in a century story, Felsenthal said. Fauci and medical workers “stood up for science,” Felsenthal said. He also acknowledged the health care workers who slept in their cars and worked endlessly to save lives as COVID-19 continues to spread. Fauci is a physician and immunologist who has served as the director of the National Institute of Allergy and Infectious Diseases.

The Lebanese people will no doubt be disappointed . They were hopeful that They will be named the person of the year

Ingrid Abboud  a well known blogger in Lebanon wrote to Times in August following the massive explosion of Beirut Port :

As for the cover photo – may I suggest one of the Lebanese people together holding their brooms, with their masks and gloves on, cleaning the rubbles – with the destruction and port around/behind them. Our army and government sat back and watched while We the People did their job and still are.