Already had the coronavirus? You could get it again 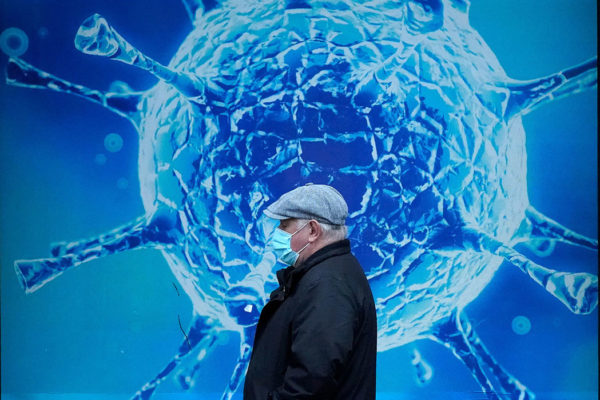 A man wearing a protective face mask walks past an illustration of a virus outside Oldham Regional Science Centre on November 24, 2020 in Oldham, United Kingdom.
Share:

Reinfection reports are still rare but steadily growing around the world, and they’re likely underreported.

PEOPLE CAN CATCH COVID-19 twice. That’s the emerging consensus among health experts who are learning more about the possibility that those who’ve recovered from the coronavirus can get it again. So far, the phenomenon doesn’t appear to be widespread—with a few hundred reinfection cases reported worldwide—yet those numbers are likely to expand as the pandemic continues.

Identifying reinfections is tricky: Not only does it take a while for subsequent bouts to show up, health departments must make sure that alleged cases really are reinfections because coronavirus residue can linger for weeks. For example, University of Alabama football coach Nick Saban made headlines just before Thanksgiving when he tested positive for a second time. But it is unclear if he was truly reinfected because of a blindspot in how officials screened for cases during his first episode back in October.

Because COVID-19 reinfections are still relatively rare, they can’t be blamed for the ongoing surges. Still, these incidents could be unwelcome news for coronavirus veterans who have been hoping their experience might have given them a so-called immunity passport. Such accounts show that recovering from the SARS-CoV2 coronavirus isn’t an excuse to shed masks and flout social-distancing rules while the pandemic is in full swing. In October, an 89-year-old Dutch woman was the first documented death of someone who had contracted the coronavirus a second time.

Immunity may wane over time—just like it does with other kinds of coronaviruses—and getting sick may even prime some people to suffer worse symptoms if they catch the virus a second time.

Take this case study, published in October in The Lancet: In early April, a 25-year-old Nevada man showed up to a community testing center complaining of a sore throat, cough, headache, and nausea. Sure enough, he tested positive for COVID-19, and he went home to isolate. In the weeks that followed, two more tests confirmed he had fully recovered. Yet by the end of May, the coronavirus had struck again. This time, he came down with an even worse case that was marked by shortness of breath and required him to go to the emergency room for oxygen.

Other countries have also reported reinfection rates that suggest the true global toll is unknown but potentially dangerous. Last month, Sweden launched an investigation into 150 cases. In Brazil, scientists are tracking 95 cases. And Mexico claimed to have 258 reinfection cases as of mid-October—nearly 15 percent of which were severe, and 4 percent were fatal. The nation’s datasets show that people who suffered from serious first cases were more likely to be hospitalized with subsequent infections.

“The takeaway is that reinfection is certainly possible,” says Richard Tillett, a biostatistician at the Nevada Institute of Personalized Medicine at the University of Nevada, Las Vegas, and lead author of the case study. “It seems uncommon and maybe even rare. But it’s real and can happen.”

Why spotting reinfection is harder

A new mutation appears in SARS-CoV-2 every 15 days, on average. So far, those natural changes are not so extensive that they alter the nature or potency of the coronavirus, aka it isn’t a new strain. But they can provide evidence that the patient’s second bout wasn’t the same as the original infection.

“It’s not that patients get re-infected from a new strain,” says Nathan Grubaugh, assistant professor of epidemiology at Yale School of Public Health in New Haven, Connecticut. Such sequencing data, he says, simply offers a “genetic signature” to show if the recurrence of the disease stems from a new infection.

That’s how the Nevada team was convinced that their patient didn’t simply suffer from a persistent, clandestine infection that suddenly had grown worse. “Our argument is that he caught it from a second source because we observed six different mutations,” says Tillett.

Based on public information, it’s unclear if Nick Saban, Alabama’s football coach, has been reinfected by the coronavirus.

No genetic sequencing details have been released, and some mystery surrounds his first diagnosis, which a bid to end isolation early.

If that result is negative along with two additional PCR tests conducted 24 hours apart, then the origin subsequent tests

Using the combination of patient histories and genetic sequencing is the bona fide way to track reinfections; they can’t be gleaned by surges measured with standard testing. To do this going forward, health labs will need to unify their practices and store specimens for the long term. A recent survey in Qatar identified 243 potential reinfections based on case history, but only four had enough genetic material to be confirmed.

Local health officials who learn of alleged repeat cases are now encouraged to send specimens to a testing lab that is equipped with genetic sequencing capacity, as well as to carefully document symptoms and the interval between initial infection and a suspected reinfection.

That time interval is particularly critical because it could help answer the question: How long will our immunity last against SARS-CoV-2?

A kinder COVID-19 the second time around?

Much of society’s return to normalcy hinges on the duration and strength of our COVID-19 immunity. Along with determining how people recover from the disease, it will dictate how often a vaccine needs to be taken to control the pandemic, and even whether social distancing will endure.

But it takes time to prove if immunity to any disease is durable. For early clues to how COVID-19 might behave, health experts tried to divine the risk of reinfection by looking at other human coronaviruses. For example, one study of four seasonal coronaviruses published in September in Nature Medicine found that reinfections could occur as soon as six or nine months later, but were more likely to be observed at 12 months. But a body’s response to SARS-CoV-2 is unlike that of seasonal viruses because humans and those latter germs have had time to adapt to each other.

Grubaugh generally attributes the phenomenon of waning immunity to patients’ lack of antibodies for a particular virus. These proteins are produced in the immune system in response to an infection. They help stifle the germ as it invades and are widely believed to ward off future attacks.

Evidence suggests that 95 percent of people produce antibodies two weeks after the COVID-19’s onset. Grubaugh says it’s possible SARS-CoV-2 antibodies could fade over time and you could become susceptible again, but he doesn’t expect that to happen for years or decades. More likely is that some people don’t develop a foolproof antibody response in the first place, he says.

The latter appears to be what happened to a 33-year-old Hong Kong man who was first sick in March and then developed an asymptomatic case in August. Even though he didn’t exhibit the classic cough, fever, or headache the second time, he still became a potential spreader. Grubaugh suspects most reinfections at the moment are due to a person’s immune system being compromised.

What makes the reinfection story even more mystifying is that such accounts come at a time when emerging research suggests immunity to COVID-19 might actually be robust. Some preliminary studies do show that antibody levels drop within a couple months after SARS-CoV-2 infections, but others argue that these waning numbers don’t mean a loss of protection.

In fact, fading antibodies may be a sign of a normal and healthy immune response. In November, a British study published as a preprint (meaning that it was not peer reviewed) reported that an initial flood of antibodies soon after infection corresponded with protection for six months—even if the antibody levels faded over time. The study documented only three asymptomatic reinfections among 1,246 health-care workers who had detectable antibodies early on.

That’s because antibody levels don’t reveal the full story of a person’s ability to fight off future infections, says S. Vincent Rajkumar, an oncologist and professor of medicine at the Mayo Clinic in Rochester, Minnesota, who studies immunity.

Think of the human immune system as an orchestra, and among its versatile players are B cells and T cells. When SARS-CoV-2 invades, the body’s opening movement is frantic. Some B cells rev up swiftly, producing that first burst of antibodies within a week or two. Simultaneously, a group of T cells—known as killers—hunts down any other cell infected by the coronavirus and gets it to self-destruct. A separate type of T cell—known as helpers—guides both of these crisis responses. If any part loses the harmony, it can throw off the entire production and actually cause more damage rather than less.

While all of this is happening, the immune system is also learning. A fraction of these B cells and T cells get stored away as so-called memory cells. After recovery, the memory cells continue to work behind the scenes to prevent reinfections.

“The cells that made those antibodies will still be around. It will be difficult for a new infection to cause the same amount of harm as the first one. The body already knows how to respond,” Rajkumar says.

This is why scientists were excited in July when a research paper showed that memory T cells were still detectable years after people recovered from the 2002-2003 SARS coronavirus, a close cousin of this year’s plague.

Now, the latest evidence suggests that both B cells and T cells generated from COVID-19 infections are also likely to stick around for the long run. One preprint, published November 16, began to sketch out the lifespans for these critical components of the immune system among 185 coronavirus patients. It showed that memory B cells remained widely abundant after six months, while memory T cells had been reduced, but only by half. Another study from November found that a hundred health-care workers who contracted the coronavirus in the spring and showed mild or few symptoms—and didn’t produce many antibodies to begin with—still had robust T cells six months later.

What’s unknown is how these B cells and T cells will act if the body is re-exposed to the coronavirus. Will they produce an inflammatory response that somehow leads to a worse case later with more severe symptoms? Or will they blunt the outcome and yield the mild reinfections witnessed in some early reports?

If the trajectories of cold-causing coronaviruses are any reassurance, getting COVID-19 again won’t be nearly as miserable the second time for most people, says Rajkumar. That means the Hong Kong case would be the norm, while the Nevada man who developed a more severe case after being re-infected might not be typical.

For now, there isn’t enough long-term research to know if B cells and T cells activated by the cutting-edge mRNA vaccines on the verge of approval will offer lasting protection, though a recent, two-month study in mice suggests that the answer could be “yes.”

In the meantime, even if recovered COVID-19 patients are counting on a less painful second episode, they shouldn’t toss aside their masks. They could still catch the virus and pass it to others, who might then become sick.

“You might get re-infected, and your symptoms might be so mild that you don’t know about it,” says Rajkumar, adding that mask-wearing should continue until the world has reached herd immunity. “It’s wise to wear a mask even if you’ve had COVID-19 out of concern for others