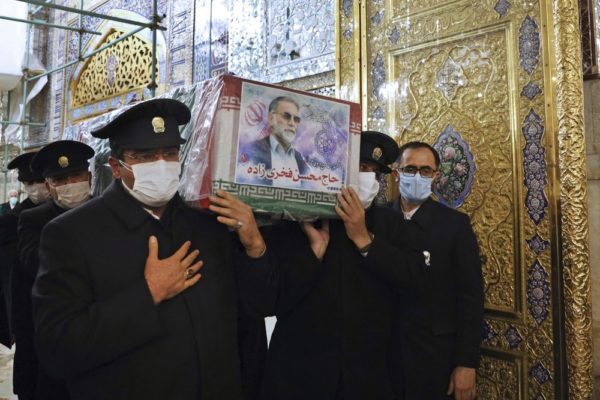 In this picture released by the Iranian Defense Ministry and taken on Saturday, Nov. 28, 2020, caretakers from the Imam Reza holy shrine, carry the flag draped coffin of Mohsen Fakhrizadeh, an Iranian scientist linked to the country’s disbanded military nuclear program, who was killed on Friday, during a funeral ceremony in the northeastern city of Mashhad, Iran. An opinion piece published by a hard-line Iranian newspaper has suggested that Iran must attack the Israeli port city of Haifa if Israel carried out the killing of a scientist. (Iranian Defense Ministry via AP)
Share:

BEIRUT – Lebanon on Monday called for self-restraint following the assassination of a prominent Iranian nuclear scientist, to avoid a slide towards the “worst scenario”.

Lebanon, which is home to the heavily armed, Iranian-backed Hezbollah group, condemned the killing of Mohsen Fakhrizadeh last Friday in an ambush near Tehran

In a statement, the Lebanese foreign ministry urged “all parties to exercise the greatest degrees of self-restraint to avoid the slide towards the worst scenario in the region”.

Hezbollah, which was founded by Iran’s Revolutionary Guards in 1982 and exercises major influence in Lebanon, has said the response for the assassination is in Iran’s hands.

Iran’s supreme leader promised on Saturday to retaliate for the killing, raising the threat of a new confrontation with the West and Israel in the remaining weeks of Donald Trump’s presidency.

“Ghaani, who succeeded General Qasem Soleimani , (who was assassinated by the US in Iraq earlier this year) as the head of the Quds Force, the elite unit of Iranian Revolutionary Guards in charge of foreign operations, has paid a secret visit to the southern suburbs of Beirut in recent days and has spoken with (Hezbollah chief ) Hassan Nasrallah and other political and military officials of the party,” Lebanon’s French-language daily L’Orient-Le Jour reported.

“The Iranian official stressed the need to remain on alert for any eventuality, while telling his contacts that it was necessary to avoid any action that could be seen as escalation and exploited by Israel to launch a major operation,” the daily added.

The Associated Press reported that 2 senior Iraqi Shiite politicians recently said that Ghaani had visited Iraq in recent weeks to tell Iranian-backed Iraqi militia factions and Shiite politicians to avoid provoking tensions with the U.S. that could give an outgoing Trump administration cause to launch attacks in the U.S. president’s final weeks in office.

Around that same time, Nasrallah himself warned followers and allies to be vigilant during Trump’s remaining time in power.

“All of us … should be on high alert in these next two months so that it passes peacefully,” Nasrallah said in televised remarks earlier this month and urged followers to “be prepared to face any danger, aggression or harm” and to respond in kind “if the U.S. or Israel’s follies go that far.”