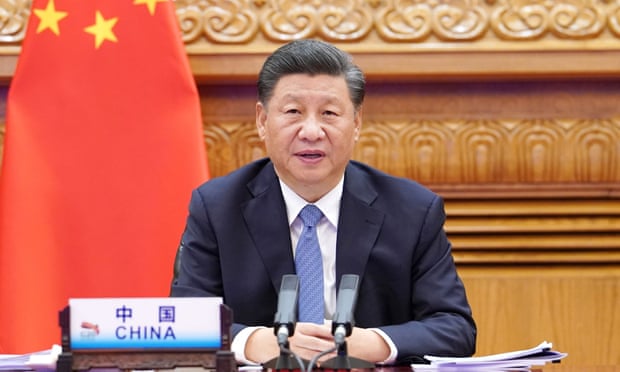 The Chinese president, Xi Jinping, has congratulated Joe Biden on winning the US election, leaving just a handful of world leaders, including Russia’s Vladimir Putin, who have not recognised Biden’s win.

Chinese state media said that in a phone call Xi told Biden he hoped the two countries would “uphold the spirit of non-conflict, non-confrontation, mutual respect and win-win cooperation, [to] focus on cooperation, manage differences, advance the healthy and stable development of China-US ties, and join hands with other countries and the international community to promote the noble cause of world peace and development”.

Several world leaders, including those of Germany and Britain, congratulated Biden soon after he was deemed to have won on 8 November, but China appeared to have waited until the US General Services Administration made its declaration and Trump had ordered his team to cooperate with the transition process.

The US-China relationship Biden has inherited is markedly different from when he was vice-president to Barack Obama and met Xi on several occasions. Under the leadership of Trump and Xi the relationship deteriorated to its lowest point in decades, with analysts warning there was little chance of it returning to Obama-era levels of engagement.

In the past four years the US and China have feuded over trade, visas for journalists and diplomats, the coronavirus, human rights abuses in Xinjiang, the crackdown in Hong Kong, and the US’s growing friendship with Taiwan. Trump has overseen diplomatic, trade and economic sanctions on Chinese officials, which he has continued to expand since the election with the presidential powers he retains until Biden is inaugurated. While Biden has pledged to maintain a tough line on China, the tone of the relationship is expected to change.

PJ Crowley, the former assistant secretary of state for public affairs under Barack Obama, told The Guardian that while the two leaders know each other there was a growing gap in each government’s understanding of the other.

“Chinese leaders believe their star is rising and America’s is falling. American leaders, especially in Congress, are increasingly skeptical of Chinese motives and see a hidden hand in leading Chinese brands like Hauwei and TikTok,” Crowley said, adding that this would continue to damage the economic relationship.

“While there can be areas where the United States and China can cooperate, big power competition is more likely to dominate the relationship even with the existing familiarity that Biden and Xi have… The relationship is heading south and the best the two leaders can do is keep the rate of descent as gradual as possible.”

Jia Qingguo, professor at Peking University School of International Studies, said the delay in congratulations was to wait for the legal challenges.

“China does not want to express its attitude too early before the end of the US election, which is a kind of courtesy.”

Jia said Biden and Xi’s history will help repair the relationship. “Although there won’t be big changes in the short term, in the long term the China-US relationship will be more stable, and there would be more room for cooperation.”