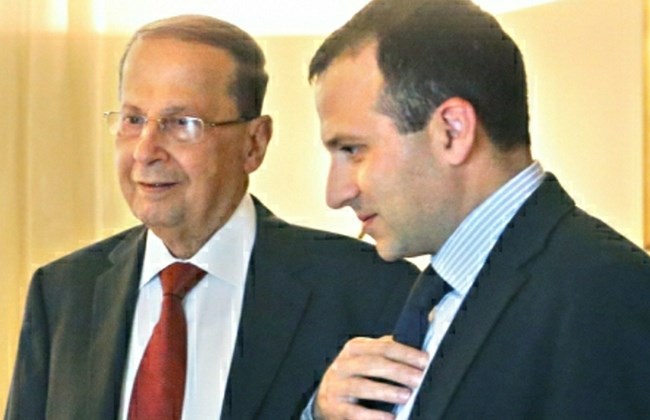 File photo of Lebanese President Michel Aoun and his son-in-law former minister Gebran Bassil . Both are reportedly behind the delay in government formation by PM Designate Saad Hariri .
Share:

Lebanese President Michel Aoun admitted Saturday that Lebanon is suffering from a system of political, financial and administrative corruption.

“Corruption has become a culture and philosophy and it has its people who justify and defend it…corrupt officials bypass laws and obstruct their proper implementation,” Aoun said in a televised speech.

Aoun added that Lebanon is prisoner to malpractices committed over the past years by politicians.

Aoun stressed that the fight against corruption begins with criminal financial investigation, and the recovery of stolen public funds.

Aoun’s speech comes after Alvarez & Marsal, the firm mandated with conducting the forensic audit of the Central Bank of Lebanese, pulled out of the deal due to the reluctance of Lebanese officials to provide necessary information. Its withdrawal puts the last nail in the coffin of aid for Lebanon by the International Monetary Fund (IMF) or any other organization.

Aoun’s reluctance to press the Central Bank and the Prime Minister to provide Alvarez & Marsal with the documentation needed to conduct the forensic audit is being blamed for the withdrawal of Alvarez & Marsal who met with Aoun following the deadline they established for receiving all the information needed but they reportedly didn’t get the support they expected .

Sunday was Lebanon’s 77th Independence Day but there was nothing to celebrate . Greek Orthodox Archbishop Odeh commented in the Sunday Mass sermon about Lebanon’s political elite : “What independence in a country where the majority of its sons sold themselves to leaders who starved, displaced, impoverished and humiliated them?”

He addressed President Aoun, by saying: “Save what is left of your era and take a courageous step that history will remember you for .” He also addressed Prime Minister-designate, Saad Hariri, by saying: “Speed up your mission, because the country is collapsing, the citizen can no longer tolerate, time is fading, and history will hold you all accountable.”

Western powers seeking to rescue Lebanon’s teetering economy have given the country’s leaders an ultimatum: there will be no bailout unless they form a credible government to overhaul a bankrupt state – and do it quickly.

France, the United States and other donors who repeatedly came to Lebanon’s aid since the 1975-90 civil war are losing patience with its politicians, many of them familiar faces in charge during the country’s descent into economic crisis.

Huge protests erupted against the ruling elite last year as people blamed them for looking after vested interests while national debts mounted. The pandemic further strained resources and a huge port blast in August destroyed large areas of Beirut.

As dollars run low, basic goods including some medicines are in short supply and more people in Lebanon are falling below the poverty line.

Aoun’s era according to analysts is the worst in Lebanon’s history since independence . He and his son-in-law Gebran Bassil are reportedly behind the delay in government formation by Hariri .

Aoun , founder of Reform and Change movement , promised to reform the country and end corruption , instead he corrupted it more and bankrupted it too , according to analysts