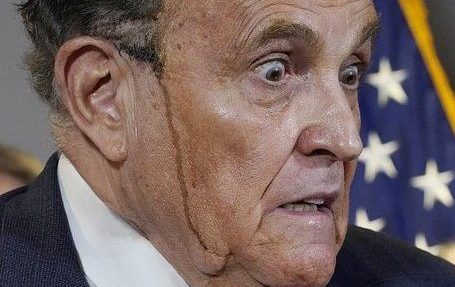 Thin brown line: Rudy Giuliani suffered a hair-dye malfunction at his press conference as he was promoting false claims and conspiracies about coronavirus and election fraud. He has been leading Trump campaign’s fight to overturn the results of the November 3 presidential election in several states including Pennsylvania, Wisconsin, Arizona and Georgia. However, state courts have repeatedly rejected the legal challenges for not providing evidence of systemic voter fraud.
Share:

The hand tally of ballots in Georgia confirmed Joe Biden’s lead over Donald Trump of about 12,800 votes, or roughly 0.3 per cent. Once the results are certified, a margin of under 0.5 per cent gives the losing campaign two days to request a full recount.

The state remained on the “path to victory” in Rudy Giuliani’s wild press conference where he outlined the theory of a national conspiracy to defraud Donald Trump of the presidency.

In the 1.5 hour media scrum, Giuliani went from My Cousin Vinny to a communist plot backed by Venezuela’s Hugo Chaves, in concert with Cuba and China, for mass switching of votes to Joe Biden.

Billed by Donald Trump as their “viable path to victory”, focus online got waylaid by Giuliani’s leaking hair dye sweating down his face. Between the memes, the so-called Kraken released by the campaign’s lawyers included hundreds of affidavits in key states of Michigan, Pennsylvania and Wisconsin where they hope to overturn the results.

Their star witness, via affidavit, was City of Detroit employee Jessie Jacob, who Giuliani quoted as swearing under penalty of perjury that she was instructed by supervisors to cheat by backdating ballots to make them valid.