Thousands of Trump supporters show up at his ‘Million Maga March’ 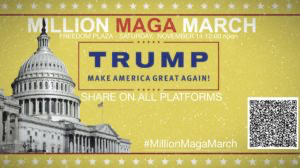 Thousands of Trump supporters showed up at the ‘Million Maga March’ in Washington DC
Share:

Thousands of supporters of President Donald Trump have turned out in Washington DC to back his unsubstantiated claims of voter fraud in the US election.

Flag-carrying demonstrators were joined by members of far-right groups including the Proud Boys, some wearing helmets and bullet-proof vests.

Earlier supporters swarmed Mr Trump’s motorcade as he drove past on his way to his golf course.

On Friday, he solidified his victory with a projected win in the state of Georgia – making him the first Democratic candidate to take the state since 1992.

He now has 306 votes in the electoral college – the system the US uses to choose its president – which far exceeds the 270 threshold to win.

However, Trump has so far refused to concede. He has launched a flurry of legal challenges in key states and made unsubstantiated allegations of widespread electoral fraud – but his efforts have so far been unsuccessful.

What’s been happening at the pro-Trump rally?

Mr Trump’s supporters kicked off the demonstrations at about noon local time near Freedom Plaza, just east of the White House, and were to head towards the Supreme Court.

They have been using different names for the event, including Million MAGA March – using the acronym for Mr Trump’s Make America Great Again slogan – as well as the March for Trump and Stop the Steal DC.

As well as more mainstream Trump supporters, members of the far-right Proud Boys and the Oath Keepers militia group were among the marchers. Conspiracy theorist Alex Jones addressed the crowd.

Trump said on Friday he may “try to stop by and say hello”. His motorcade passed the gathering demonstrators on Saturday morning and did a circuit of Freedom Plaza, but carried on to his golf club in Sterling, Virginia.

He later retweeted video of protesters, posted by White House official Dan Scavino, vowing “We will WIN!” However, it was unclear whether he planned to make a further appearance on the ground.

Some left-wing groups had planned counterdemonstrations but no serious confrontations have yet been reported.

Earlier this week accommodation website Airbnb cancelled a reservation made by an alleged member of the Proud Boys, saying “anyone affiliated with hate groups has no place on Airbnb”.

Meanwhile, fans of Korean pop music (K-pop) used the #MillionMAGAMarch hashtag online to post pictures of pancakes in protest at the pro-Trump rally.

A growing sense of a fight losing its energy

At the scene – Will Grant, BBC News, Washington DC

A gradual stream of pro-Trump supporters has been making its way towards Freedom Plaza, adorned with T-shirts and carrying placards which read “Stop the Steal” and “Trump 2020”.

The demonstrators were also identifiable by their lack of face-masks as many participants rejected measures to contain the spread of coronavirus.

In that regard alone, this pro-Trump rally is seen by its critics as reckless and irresponsible. It comes as the United States grapples with some of its worst Covid-19 infection rates since the pandemic began, with more than 180,000 new cases and 1,400 deaths recorded in the country over the past 24 hours.

None of that appeared to matter much to the participants who excitedly greeted President Trump’s motorcade as it made an impromptu pass around the plaza. They are desperate to see this election result overturned and fully back his unsubstantiated claims of election fraud and his refusal to concede.

Still, although they may deny it, there is a growing sense of a fight losing its energy and that – like it or not – these supporters will see President-elect Joe Biden in the White House in January.

What is Trump saying?

The president continues to dispute the election result. In a slew of tweets on Saturday, he said checks on ballots in Georgia were a “waste of time”, alleging problems with signatures but without giving evidence.

A manual recount is to be carried out in Georgia because of the narrow margin between the two candidates, but this is not expected to change the results there.

On Friday, election officials said the vote was the “most secure in American history”, the most direct rebuttal from federal and state authorities of the president’s claims.

However, Mr Trump’s efforts to overturn the result suffered three setbacks on Friday:

What’s happening with the transition?

Pressure is growing on Trump to acknowledge Biden’s victory and help prepare the transition from one administration to another.

The General Services Administration (GSA), the government agency tasked with beginning the process, has yet to recognise Mr Biden and his running mate Kamala Harris as winners.

The Biden team have not been given access to classified security briefings, federal agencies and funding needed to ensure a smooth transition of power. Biden spokesperson Jen Psaki said this lack of access could affect Mr Biden’s ability to govern.

“You need real-time information to deal with crises of the moment,” she said, highlighting the impact of the pandemic. “It’s imperative that our team and our experts have that access.”

Adding his voice to those calls, President Trump’s former chief of staff, John Kelly, said the delay in starting the transition was hurting national security. “It’s not a process where you go from zero to 1,000 miles per hour,” he told Politico.

A small but growing number of Republicans are also backing calls for the president-elect to be given daily intelligence briefings.