Biden planning to address nation . On track for what Trump once called ‘massive landslide’ victory 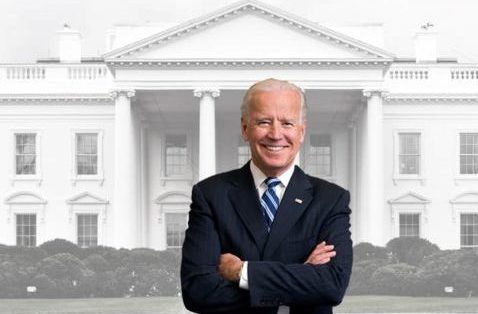 PHILADELPHIA —  Joe Biden stood just shy of the White House on Friday after pulling ahead in Pennsylvania and Georgia, two hard-fought states that offer the electoral votes he needs to cap his decades-long quest to be president.

The Democrat and his running mate, California Sen. Kamala Harris, planned to deliver a speech to the nation Friday night from Wilmington, Del., Biden’s hometown, in what could be a formal declaration of victory — something he has studiously avoided.

Biden, making his third try for president, has secured 264 of the 270 electoral votes needed to win, a count that includes Arizona, where the Associated Press has declared him the victor but the tally continues in a close race. He also leads in Georgia, Nevada and Pennsylvania, which offer a combined 42 electoral votes.

But President Trump showed no signs of acknowledging defeat.

“Joe Biden should not wrongfully claim the office of the President. I could make that claim also,” tweeted the president, who did exactly that in the early hours Wednesday. “Legal proceedings are just now beginning!”

Republican lawyers went to the Supreme Court seeking an order that would “segregate” late-arriving mail ballots and prevent them from being counted, even though Pennsylvania’s secretary of state had already issued an order to do that. Either way, those ballots were not likely to change the outcome.

Pennsylvania still has tens of thousands of ballots left to count, but the bulk of them come from parts of the state that heavily favored Biden, making it unlikely Trump will reclaim the lead.

Other key states were still counting as well.

In Georgia, where Biden was ahead by just over 4,000 votes out of nearly 5 million cast, election officials said there would probably be a recount.

“Where are the missing military ballots in Georgia?” Trump demanded on Twitter. “What happened to them?”

In Georgia, a state official answered: There are no missing military ballots.

If Biden maintains his position, he would end up with 306 electoral college votes, the same number Trump won in 2016 — which Kellyanne Conway, a Trump strategist, described on Twitter at the time as “Landslide. Blowout. Historic.”

Winning Pennsylvania, along with previously declared Wisconsin and Michigan, would be the fulfillment of a Democratic mission that began with Clinton’s defeat: rebuilding the “blue wall” of traditionally Democratic states in the industrial Midwest that Trump demolished in 2016. His victories that year, by fewer than 80,000 votes across the three states, gave Trump his electoral college victory.

But Biden hoped to do more than reclaim lost ground. Wins in Georgia and Arizona, two traditional GOP strongholds, would be a significant encroachment in the Republican-leaning Sun Belt.

A victory in Arizona would be the fruit of Democrats’ appeal to Latino voters, even as Biden fell short of expectations among that diverse voting bloc in Florida and Texas.

A victory in Georgia, home state of the late civil rights icon Rep. John Lewis, would be an important breakthrough for Democrats hoping to make inroads in a changing South and a testament to the strong support Biden has received from Black voters.

The vote counting continued a third postelection day despite the Trump campaign’s multiple legal maneuvers and the president’s baseless claims of vote fraud.

Many in his own party cast doubt on those efforts.

Senate Majority Leader Mitch McConnell (R-Ky.) on Friday morning issued a carefully worded statement on Twitter that did not openly challenge Trump, but fell short of a full-throated endorsement.

“Here’s how this must work in our great country: Every legal vote should be counted,” McConnell said. “Any illegally-submitted ballots must not. All sides must get to observe the process. And the courts are here to apply the laws & resolve disputes. That’s how Americans’ votes decide the result.”

Republican Pennsylvania Sen. Pat Toomey, in an interview on CBS, defended the integrity of his state’s vote count.

“I think what the president needs to do is, frankly, put his big-boy pants on,” Mayor Jim Kenney said at a news briefing at the city’s ballot counting center. “He needs to acknowledge the fact that he lost, and he needs to congratulate the winner, just as Jimmy Carter did, just as George H. W. Bush did and, frankly, just as Al Gore did, and stop this and let us move forward as a country.”

Hundreds of police officers stood guard in Philadelphia as scores of anti-Trump protesters gathered outside the convention center where election workers were counting ballots. A white “Count Every Vote” banner spanned the street in front of the Reading Terminal Market.

With roughly 40,000 remaining ballots to be counted, the city’s voters have favored Biden over Trump, 80% to 18%, more than enough to compensate for Trump’s strong support in rural and exurban areas. Mail-in ballots have skewed even more in Biden’s favor: 92% for the former vice president and 8% for Trump.

The count was a slow process, with each ballot needing to be removed from two envelopes, unfolded and scanned, and the eligibility of every voter checked.

In many states, those preliminary steps are done before election day, but in Pennsylvania, Republican legislators blocked efforts to change the law to allow processing of the ballots in advance, setting the stage for the long count that Trump and his supporters are now attacking.

Justin Clark, Trump’s deputy campaign manager, claimed Democrats were blocking the president’s observers and counting ballots “with zero transparency.” But Al Schmidt, the Republican on the three-member Philadelphia election commission, told CNN on Friday that Republican observers had been there nonstop.

On Thursday, Biden made at brief appearance in Wilmington, expressing confidence that he and Harris would prevail. He called for calm.

“The process is working,” Biden said. “The count is being completed, and we’ll know very soon.”

A subdued Trump responded hours later at the White House, where he renewed accusations of voter fraud without offering any evidence.

Protesters supporting both candidates have been gathering outside locations where vote counting was underway. There were demonstrations and counter-demonstrations across the country.

But the wreckage and ruin that many feared has not materialized. Instead, there was the quiet but deliberate work of whittling down mountains of mail-in ballots.

Biden had urged his supporters to vote before election day, to avoid the risk of crowding into polling places amid the COVID-19 pandemic. Trump discouraged his backers from mailing their votes, urging them to show up on Tuesday. In many states, those ballots were counted first, which is why the president jumped out to an early lead in contests that have since moved Biden’s way.

With some exceptions — House Minority Leader Kevin McCarthy of Bakersfield and Sens. Ted Cruz of Texas and Lindsey Graham of South Carolina among them — many top Republicans stayed silent or condemned Trump’s false claims. That left it mostly to the president’s die-hard supporters and commentators on Fox News, talk radio and other sympathetic outlets to make his case.

Maryland Gov. Larry Hogan, who briefly considered challenging Trump in the Republican primaries, was blunt in his criticism.

“There is no defense for the President’s comments tonight undermining our Democratic process,” he tweeted Thursday. “America is counting the votes, and we must respect the results as we always have before. No election or person is more important than our Democracy. “

Even Sean Spicer, who as White House press secretary fiercely defended the president and his prevarications, said in a SiriusXM interview that he had seen no evidence of mass fraud.

“You can’t just throw a term out there without being specific,” he said.