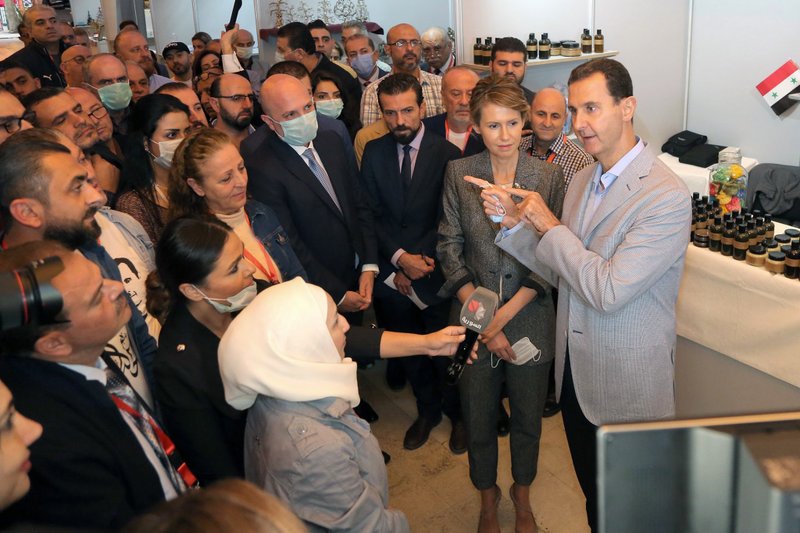 In this photo provided by the official Facebook page of the Syrian Presidency, Syrian President Bashar Assad, right, and first lady Asma Assad, center right, speaks with people during his visit to the Producers exhibition, in Damascus, Syria, Wednesday, Nov. 4, 2020. Assad said much of the current economic distress in Syria is a direct result of the banking crisis in neighboring Lebanon, where many Syrian businessmen have traditionally kept their money. He added that between $20 billion- and $ 42 billion held by Syrians were estimated to be stuck in Lebanese banks.(Syrian Presidency Facebook page via AP)
Share:

DAMASCUS, Syria — Syrian President Bashar Assad said much of his country’s current economic distress is a direct result of the banking crisis in neighboring Lebanon, where many Syrian businessmen have traditionally kept their money.

Assad said that between $20 billion and $42 billion held by Syrians are estimated to be tied up in Lebanese banks. He spoke during a tour of a trade fair in Damascus with his wife on Wednesday.

“This number for an economy like Syria is a scary number,” Assad said, according to a recording published by SANA, the state news agency.

Lebanon is experiencing a serious banking crisis, which has led to the introduction of informal capital controls to combat capital flight and prop a flailing local currency. Depositors are unable to make foreign transfers and there is a limit on how much they can withdraw.

Lebanese banks had offered a lifeline to the Syrian economy, which under the Assad family rule faced decades of Western sanctions that often targeted individual businessmen and cut off Syrian banks.

However, Assad did not blame the sanctions for the ongoing crisis as most government officials do. “When the banks in Lebanon closed, we paid the price. This is the essence of the problem,” he said.

Low oil prices and poor access to the Kurdish-held northeast of Syria, where much of the country’s wheat is grown, also played a part, he said.

Syria’s economy is in shambles and the nine-year civil war has killed more than 400,000 and displaced half the country’s population. The local Syrian currency crashed in recent months making it more difficult for many Syrians to buy food. More than 80% of the Syrian population live in poverty, according to U.N.

The spread of coronavirus in the war-torn country has further restricted economic activities and increased unemployment.