US cities prepare for unrest that election night spared them 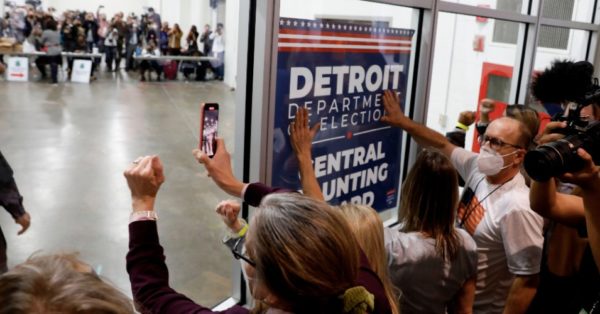 Supporters of U.S. President Donald Trump bang on the glass and chant slogans outside the room where absentee ballots for the 2020 general election are being counted at TCF Center on November 4, 2020 in Detroit, Michigan. (Photo: Jeff Kowalsky/AFP via Getty Images)
Share:

Predictions of widespread violence fizzled on Election Night, but police and businesses across the U.S. are keeping preparations in place as President Donald Trump falsely claims victory — a scenario that experts warned held a greater potential for unrest.

Anti-Trump protesters had gathered Tuesday in cities including Washington, Portland and Los Angeles, leading to scattered arrests. The relative quiet stood in contrast to the planning: more than a dozen states activating National Guard troops, retailers boarding up windows and anxious Americans loading up on body armor and guns.

The question now is whether conflict erupts as Trump sows distrust in the count.

A Facebook group called “Stand Up Michigan to Unlock Michigan” on Wednesday put out a call to action, asking volunteers to go to Detroit’s TCF Center, locally known as Cobo Hall, to challenge the Michigan results being tallied there. The post told the group’s 79,000 members that hundreds of left-wing challengers were already on the premises.

The protesters, many of whom said they wanted to be poll watchers, were initially blocked by police at the front door. The crowd entered the convention center through an unguarded rear door and resumed chanting: “Stop the count!”

The left-leaning group Protect The Results plans more than 100 protests to defend the election’s integrity, in cities including New York, Washington and Los Angeles, both virtual and in person.

Hundreds of protesters gathered on Wednesday evening in Central Park and outside the New York Public Library in Manhattan. They chanted “Count every vote,” while brandishing signs supporting Vice President Joe Biden.

“I don’t want to be here. I want to be living my life,” said Jonathan Walker, a 59-year-old carpenter from Hell’s Kitchen who came to the library. “But when the president tries to undermine every vote and discount votes, you have to come out.”

The crowd took on an almost lighthearted air, with college students and retirees singing and marching down Fifth Avenue toward Washington Square Park.

Michael Chertoff, who led the U.S. Department of Homeland Security under President George W. Bush, said in an interview Tuesday afternoon that, “the next challenge is going to be in the post-Nov. 3rd period, when there is contentiousness about counting ballots, where we’re going to get disinformation about who won.”

In a text message to supporters, the Trump campaign made a fundraising appeal, with half the money going to retire campaign debt and half for “any post-election recounts and election contests.” By Wednesday afternoon, Trump had made several statements questioning how ballots were being counted, at one point alleging fraud.

On social media platforms, far-right groups are pledging to confront left-wing demonstrators, in some cases calling for violence.

A leading concern identified by the Transition Integrity Project was a close election in which Trump adopts “a strategy of casting doubt on official election results.” Under that scenario, both Trump and Biden supporters were seen mobilizing on the ground, which the group said “significantly” increases the possibility of violence.

In a news conference Wednesday, Washington Police Chief Peter Newsham addressed an incident in which three people were stabbed near Lafayette Square. Two men and one woman suffered non–life threatening injuries. Newsham said the department didn’t know the politics of the suspect or the victims.

“If you assault someone because of their political affiliation, that would be a hate crime,” Newsham said.

After a night of protests in Portland, Oregon Governor Kate Brown kept law enforcement on alert until Friday. In recent months, the city had been shaken by nightly clashes between racial-justice protesters and federal agents.

“All Oregonians have the right to free expression and peaceful assembly,” she said in a statement. “Political violence, intimidation, and property destruction will not be tolerated.”

In New York City, clergy were preparing to support protesters, despite a call from Mayor Bill de Blasio’s office to stay out of the fray. Park Avenue Christian Church stands ready to both deploy members and open its doors as a refuge. Rabbis have been trained in street chaplaincy and de-escalation, said Rabbi Jill Jacobs, executive director of the human-rights organization T’ruah.

Retailers also are keeping protective measures in place. “Many of the stores who have chosen to temporarily place protective boards on their windows remain open for business and we expect that boards will stay in place until the news on election results become more definitive,” said Jerome Barth, president of the Fifth Avenue Association. Rich Gamble, chairman of the Magnificent Mile Association in Chicago, said protections there would likely be up for at least a week. In Los Angeles, Rodeo Drive will remain shut through at least Wednesday.

Some businesses in Colorado Springs, Colorado, that hadn’t boarded up before Election Day were now paying emergency rates, said Danielle Stickler, a spokeswoman for ServiceChannel.

Even before the election, America was convulsed by months of protests and unrest after the May killing of George Floyd, an unarmed Black man, by Minneapolis police. The past six months have seen a sharp rise in armed groups, the vast majority of which are far-right organizations, according to the Armed Conflict Location & Event Data Project.

Georgia, Michigan, Pennsylvania, Wisconsin and Oregon are at highest risk of such activity, the group said in a recent report, followed by North Carolina, Texas, Virginia, California and New Mexico.

Online calls for violence among right-wing organizations have also risen. That only escalated after Trump’s false statement Wednesday morning that he had won, which “provoked a seismic positive, confrontational response from the far-right’s pro-Trump and accelerationist spheres,” said SITE Intelligence Group, which tracks online activity of white supremacist and jihadist organizations.

“It makes sense to me that we didn’t see much yesterday,” said Roudabeh Kishi, director of research and innovation at the Armed Conflict project. Risk of unrest increases later this week, she said, as votes continue to be counted and some groups dispute the results.

“We’re not home free quite yet,” Kishi said. “And I don’t think we will be, frankly, for a long time.”

In New York, demonstrators said they would stay in the streets as long as needed. At Washington Square, demonstrator Chloe Hartstein, 34, said protesters’ work had just begun.

“With Covid we’ve had a lot of time to think about racism and other things wrong with our country,” she said. “We have to hold even Biden accountable that change happens fast.”