GOP leaders break with Trump, say take time to count all the votes 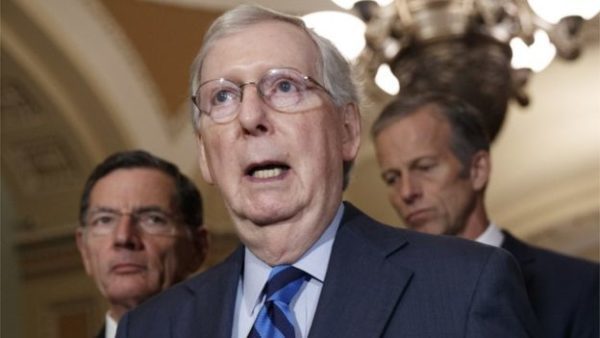 WASHINGTON — Some Republicans are not falling in line behind President Donald Trump’s attempts to falsely declare victory and seek to halt some vote-counting in the presidential race, with several GOP leaders expressing rare public rebukes of the president.

With millions of votes still uncounted, Trump in a 2:35 a.m. Wednesday speech at the White House baselessly claimed he had defeated Democrat Joe Biden and alleged “major fraud on our nation” as election officials work through a massive surge in mail-in ballots, which they had long warned would take extra time to count. The president called for a halt in “all voting.”

“There’s just no basis to make that argument tonight,” former New Jersey Gov. Chris Christie said on ABC News. “There just isn’t. All these votes have to be counted that are in now.”

Christie is a Trump ally who spent seven days in the intensive care unit after catching the coronavirus, potentially from the president, while helping him prepare for the first debate with Biden.

“You have to let the process play itself out before you judge it to be flawed. And by prematurely doing this, if there is a flaw later, he has undercut his own credibility,” Christie continued. “So I think it’s a bad strategic decision, it’s a bad political decision, and it’s not the kind of decision you would expect someone to make tonight who holds the position he holds.”

Trump’s campaign amplified their boss’s erroneous claims in public statements and threats of lawsuits, which Biden’s team dismissed as meritless, insisting even the conservative-leaning Supreme Court would not give them any consideration.

But the more surprising rebukes came from members of Trump’s own party.

Ohio Gov. Mike DeWine said on Fox News Wednesday evening that while “I am for Trump…if it ends up being Biden, all of us will accept that.”

“We believe in the rule of law,” De Wine said. “Every vote has to be counted. We as a country accept election results. We believe in counting all the votes.”

“Stop. Full stop. The votes will be counted and you will either win or lose,” Rep. Adam Kinzinger of Illinois replied to Trump on Twitter. “When the results are confirmed, we must accept the outcomes with respect for our democracy.”

Sen. Marco Rubio of Florida, who spoke at a recent Trump campaign rally, said in a tweet that “taking days to count legally cast votes is NOT fraud.”

man… he called it WORD for WORD. pic.twitter.com/9uBn1Sm8xa

“Regardless of where you stand on this race and what party you are and who you voted for, most Americans really want a free and fair election process, and they want us to count the votes,” Hogan said at a Washington Post event.

Trump can typically count on the conservative media echo chamber and Republican allies to validate his claims of conspiracies out to get him, no matter how thinly sourced.

But his attacks on the integrity of the election appear to be a bridge too far for some Republicans, including some who won re-election themselves in Tuesday’s vote, such as McConnell.

“It’s best for everyone to step back from the spin and allow the vote counters to do their job,” Lee said.

Utah’s Republican governor-elect, Spencer Cox, called the Trump campaign’s claims “garbage” and said “there is nothing nefarious about it taking a few days to count all legitimate votes.

“Under our Constitution, state legislatures set the rules and states administer our elections. We should respect that process and ensure that all ballots cast in accordance with state laws are counted. It’s that simple,” Republican Sen. Rob Portman of Ohio, a Trump critic, said in a statement.

“Losing an election is not a coup,” conservative commentator Erick Erickson said on Twitter, responding to a Trump tweet falsely claiming victory by saying, “That’s not how this is done.”

“No, Trump has not already won the election, and it is deeply irresponsible for him to say he has,” popular online personality Ben Shapiro tweeted.

Scott Walker, the GOP former governor of Wisconsin and a sharp partisan tactician, threw cold water on the Trump campaign’s pledge to request a recount in the battleground state, where Biden is the apparent winner and leads Trump by about 20,000 votes, according to NBC News.

Trump’s former national security adviser John Bolton, a longtime GOP foreign policy hand who has become a Trump critic since leaving the White House, saidon Sky News that the president’s claims were “some of the most irresponsible comments that a president of the United States has ever made.”

And former GOP Sen. Rick Santorum of Pennsylvania said he was “very distressed by what I just heard the president say.”

“The idea of using the word ‘fraud’ being committed by people counting votes is wrong,” Santorum said on CNN. “They’re counting the absentee and mail-in ballots right now. And some counties have stopped counting. Why have they stopped counting? Because it’s 2:48 in the morning!”

Republican Gov. Doug Ducey of Arizona, where Biden leads in a too-close-to-call race, according to NBC News, urged patience.

“Arizonans turned out in historic numbers for this election, and we owe it to them to count their votes,” Ducey said in a statement.

And former Arkansas Gov. Mike Huckabee said counting votes, no matter how long it takes, is fundamental in a democracy.

“If the president loses on that front, then he loses,” Huckabee said on “Fox & Friends” Wednesday morning. “We win by ballots, not by bullets … and we’ve got to keep reminding ourselves of that.”