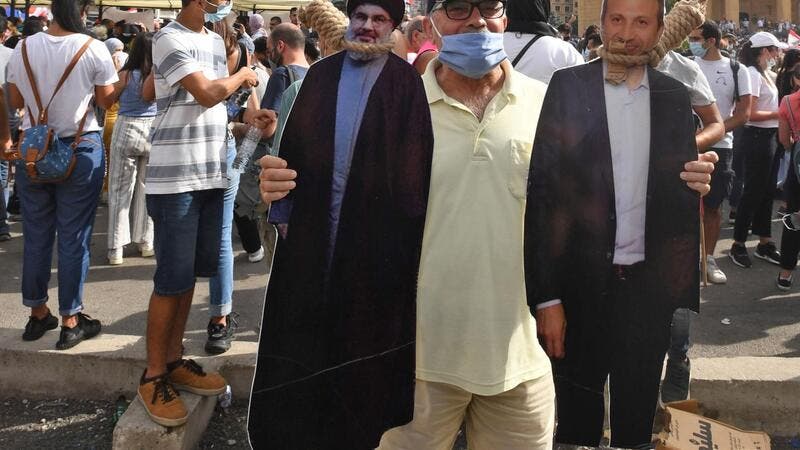 Effigies of Hezbollah chief Hassan Nasrallah and FPM chief Gebran Bassil were attached to mock gallows which have become a key symbol of the demonstrations in Martyr Square in downtown Beirut . The gallows were erected in the same place where several people were hanged more than 100 years ago by the then ruling Ottoman Empire for revolting against Istanbul. The Martyr’s Square statue commemorates those executions. During his tenure as the Minister of Energy and Water, Bassil promised to provide electricity 24-hours a day . After years of failures , Lebanon is running out of time – and money – to keep the lights on .
Share:

Frustration mounted in Lebanon on Sunday over the continued obstacles facing the formation of a new government, by PM Designate Saad Hariri.

Eleven days after Hariri was appointed as the PM designate , no date has been set to declare the formation of the cabinet

“We do not know if the obstructing parties actually want to form a government. It is about party quotas again, regarding the number of ministers and the rotation of portfolios,” senior Hariri adviser Hussein Al-Wajh told Arab News.

Dr. Mustafa Alloush, a leading official in Hariri’s Future Movement, told Arab News: “The main obstacle to forming a government is Gebran Bassil, who has returned to his old habits .”

Hariri resigned as prime minister in October 2019 and was replaced by Hassan Diab who formed a government that bankrupted the country. Mustapha Adib was appointed as Diab’s replacement but was unable to form a cabinet for the same reasons that Hariri is currently facing