Russia promises to help Armenia, as its conflict with Azerbaijan escalates 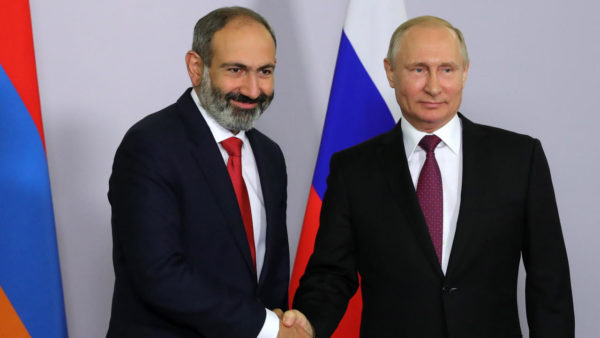 The announcement, which further raises the prospect of an escalation in the conflict, came after Armenia and Azerbaijan failed to agree a fresh ceasefire in Nagorno-Karabakh conflict during talks in Geneva on Friday.

Russia responded on Saturday, saying it would provide “necessary” assistance to Armenia.

“Russia will render Yerevan all necessary assistance if clashes take place directly on the territory of Armenia,” the foreign ministry in Moscow said, calling on the warring sides to immediately halt fire.

Russia has a military base in Armenia and has a defence treaty with Yerevan.

“The prime minister of Armenia has asked the Russian president to begin urgent consultations with the aim of determining the kind and amount of aid which the Russian Federation can provide Armenia to ensure its security,” the ministry said in a statement.

Azerbaijan and Armenia have been locked in a bitter conflict over Karabakh since Armenian separatists backed by Yerevan seized control of the mountainous province in a 1990s war that left 30,000 people dead.

The current clashes broke out on September 27 and fighting has persisted despite the repeated international attempts to secure a ceasefire.

Russia has previously said that its defence pact with Armenia does not extend to the breakaway region of Nagorno-Karabakh.

But Pashinyan in his letter to Putin said that hostilities were getting closer to Armenia’s borders and reiterated that Azerbaijan’s ally Turkey was backing Baku, according to the statement.

He requested Moscow’s help, invoking the two countries’ close ties and a 1997 treaty on friendship, cooperation and mutual assistance.

The warring sides have three times agreed to ceasefires during talks mediated by Russia, France and the United States but the truces have all quickly fallen apart.

More than 1,200 people from both sides have been reported dead since the fighting began, but the actual death toll is believed to be substantially higher.

Understanding the war in Nagorno-Karabakh

Nagorno-Karabakh is a 4.400-square-kilometer (1,700-square-mile) enclave with a population of 150,000. It is situated in the heart of Azerbaijan, but most of the population are Christian Armenians, with only a minority of Azeris or Turks. The enclave is a product of the Soviet policy of divide-and-rule, a policy that has been used by all occupiers . With the dissolution of the Soviet Union, Armenia tried using peaceful methods in order to transfer the enclave to its sovereignty, but this met with opposition. War broke out between the two countries in 1988 over control of this enclave. This intensified in 1991 and lasted for three years, and included ethnic cleansing and a massacre of Armenians in Baku. Thirty thousand people died, and one million lost their homes.

A cease­­­-fire was declared in the enclave in 1994, with borders determined, but since then, all international efforts to reach a permanent solution have been in vain. The Armenians in the enclave declared an independent state called the Republic of Artsakh, which has not been recognized by any country, , including Armenia. The relative quiet reigning there over the last 25 years was breached from time to time with border incidents flaring up, or with short exchanges of fire. This is not the case this time, not in the extent of forces involved or in the intensity of fighting. This conflict is a classic geographical, historical, religious and ethnic one, but it exceeds the boundaries of the Caucasian region, interfacing with the battle between Shi’ite Iran and Turkey over regional hegemony, all under the eyes of Big Brother, namely Russia.

Turkey and Israel, currently hostile to one another (with Recep Tayyip Erdogan stating only last month that Jerusalem belongs to the Moslems), find themselves both supporting Azerbaijan, a Shi’ite Moslem country. On the other side, Iran, a third of whose population is of Azeri extraction (including its Supreme Leader Ali Khamenei), is supporting Christian Armenia and, according to some reports, supplying it with weapons. Russia, which has a military base in Armenia, is trying to please everyone, arming Azerbaijan as well. The same pattern of behavior characterizes the Kremlin’s policy in Syria, with Vladimir Putin assisting the regime of Bashar Assad and the Iranians, while providing Israel with “silent encouragement” for carrying out air strikes against Iranian positions, Hezbollah and Shi’ite militias. Greece, a strategic ally of Israel, currently in conflict with Turkey over the transport of natural gas in the eastern Mediterranean basin, is supporting Armenia.

While Israel insists the whole world should recognize the Holocaust when Nazi Germany and its collaborators systematically murdered millions of Jews, it refuses to  to recognize the massacre of Armenians by the Ottoman Empire during World War I, as a genocide. For years, this position was adopted in order not to annoy Turkey, which for 50 years was Israel’s strategic ally against Syria and, later, Iran. The Mossad and Turkish intelligence cooperated with each other, with Israel’s defense industries selling arms to Turkey for billions of dollars. Ironically, among the systems sold to Turkey were drones and technology which helped Turkey build a comparable industry. Turkish Bayraktar drones are now in action in Nagorno-Karabakh’s battlefields, as well as in Iraq, Syria and Libya.

Despite the dismantling of the strategic alliance between it and Turkey , Israel has not used this as an opportunity to fulfill its historic duty and follow its conscience and values regarding the Armenian genocide. The reason for this is Azerbaijan. At the same time that Erdogan started distancing himself from Israel, Azerbaijan and Israel grew closer. It soon became clear that the two countries had set up a strategic alliance centered on their mutual hostilities towards Iran.

Despite the fact that cluster bombs are banned , Amnesty International identified Israeli-made M095 DPICM cluster munitions that appear to have been fired by Azerbaijani forces.

“The use of cluster bombs in any circumstances is banned under international humanitarian law, so their use to attack civilian areas is particularly dangerous and will only lead to further deaths and injuries,” said Denis Krivosheev, Amnesty International’s acting Head of Eastern Europe and Central Asia.