All of Lebanon’s ills are laid bare in Beirut port 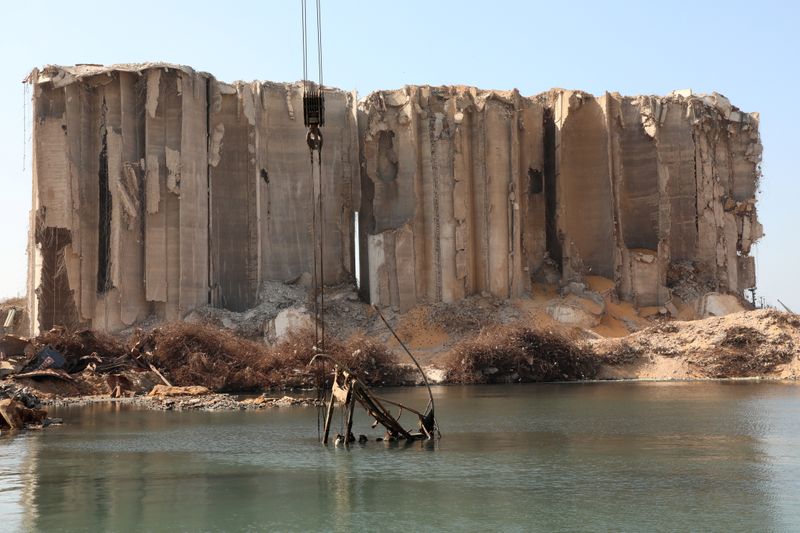 BEIRUT – The first of many warnings about a deadly cargo in Beirut’s port came in February 2014, about three months after its arrival. It was made by Colonel Joseph Skaf, described by his family as a diligent customs official.

Skaf, then the head of the anti-narcotics and money laundering division, informed the customs authority that the shipment of ammonium nitrate was “extremely dangerous” and posed a risk to the public.

In his handwritten letter, reviewed by Reuters and authenticated by a source familiar with the case, he urged that the ship, the Rhosus, be “moved away from the pier to the breakwater and if possible put under surveillance.”

Reuters couldn’t determine whether Skaf, who died in 2017, received a response to his letter or whether he followed up on his warning. The office of the customs director referred questions about the matter to the finance ministry. The ministry didn’t respond.

Skaf’s brother Elie recalls the colonel saying of the cargo, in 2014: “We will refuse to let them unload it.” Skaf’s son Michel says his father’s determination to keep the Rhosus out of the port was typical of a man who “didn’t let things pass” and challenged the wrongs he saw.

Skaf’s letter, dated Feb. 21, 2014, was the first of several warnings by port, customs and security officials about the ammonium nitrate on board the Rhosus. None were acted on.

Skaf moved a few months later to a new job overseeing airport customs. Shortly afterwards, in late 2014, the Rhosus’ cargo was transferred to a dockside warehouse. It exploded on August 4 this year, destroying whole neighborhoods and killing nearly 200 people.

For the people of Lebanon, the wreckage of the port, and the failure to heed the warnings of Skaf and others, has a wider symbolism. Nearly three months on from the blast, they are still waiting for the results of an investigation their leaders promised would reveal the truth within days. Efforts to form a new, non-partisan government foundered on Lebanon’s sectarian politics. In this chaos, international aid money, contingent on a new government stamping out corruption, has yet to flow.

Skaf’s family believes his death in 2017 was murder, possibly connected to his long career as a customs officer fighting criminality and drug smuggling, or his recent entry into politics. The official medical report, produced in 2017, found Skaf died in a fall. A second report, commissioned by the family, concluded in 2018 that Skaf was attacked.

The port, one of the busiest in the eastern Mediterranean, handling an estimated $15 billion of trade a year at its height, was rife with corruption, negligence and sectarian politics, according to nine people involved in shipping, clearance and administration. Their accounts were buttressed by import documents that one of the sources showed to Reuters.

The port mirrored the country at large, with jobs shared out along sectarian lines among mainly Muslim and Christian groups. It’s an arrangement that has governed Lebanon over the past 7 decades, and is blamed by many for plunging the country into financial ruin.

As one senior minister told Reuters: “The level of corruption in all layers of the state is beyond imagination. How much more corruption, like the port, is hidden beneath the cloaks of politicians?” He said he has received threats warning him “not to dig into corruption.” He didn’t elaborate.

After Lebanon’s 1975-1990 civil war, a transitional committee, representing the main sectarian political groups, was formed to manage Beirut’s port temporarily. The committee remains to this day.

Koraytem and Daher have been detained in connection with the explosion on suspicion of criminal negligence. Koraytem’s lawyer, who says his client bears no responsibility for the blast, told Reuters political appointments are commonplace in Lebanon, not only at the port, and “that doesn’t mean every appointee is corrupt.” A lawyer for Daher said he couldn’t comment during an ongoing investigation.

Hariri’s office denied putting loyalists into key jobs. Aoun’s media office said appointments during the president’s term, including Daher’s, were made based on “competence and experience.”

Iran-backed Shi’ite group Hezbollah maintains an indirect presence at the port through merchant allies, three of the sources said. Hezbollah leader Hassan Nasrallah has denied it has any such influence.

With the port at the mercy of rival groups, decision-making was crippled, there was no oversight and a culture of impunity flourished, the nine sources told Reuters.

According to a 2019 study by academics at Oxford University and Columbia University, 17 out of Lebanon’s 21 shipping line companies have links to politicians via their board members, managers or shareholders.

Lebanese analyst Sarkis Naoum estimates the state has missed out on billions of dollars in duty payments “because of the smuggling, under invoicing and theft that goes on” at the port. “Even warehouse guards have enriched themselves from bribes.”

A clearing agent described paying $100 to a port inspector to get a container processed. Another showed Reuters two customs documents. In the first, his application to have his cargo cleared swiftly was rejected by customs officials. In the second, it was approved. The difference, he said, was that the second time he paid a bribe.

The sources said some porters were told to clear cargoes without checking them. Many scanners used to inspect goods didn’t work properly, said Fouad Bawarshi, Deputy CEO of Gezairi shipping agent. His account was confirmed by other shipping agents.

Under-invoicing – a ruse to avoid paying the full import duty – was routine. Merchants would pay bribes to politicians and their agents at the port to ensure cargoes were valued well below their worth, the sources said.

Bissat, the head of Institut des Finances Basil Fuleihan, who has done extensive work on customs systems, said efforts to reform the port by installing automated systems and bringing in processes to curb corruption were resisted by all sides, including by politicians, customs and port officials and businessmen.

“No one could change without changing the whole system,” she said. “There was a proposal for modernizing the port authority.” It didn’t go anywhere. Bissat didn’t elaborate further.

She said she and other researchers had provided port authorities with a manual on how to handle chemicals, including nitrate. “You could not imagine that some people would be that reckless. It is just beyond imagination.”

Skaf’s family say he dealt with many sensitive cases during his career as a customs official, including some involving drugs. Colleagues sometimes warned him to be careful because of the nature of his work, said the source familiar with the case.

In the early hours of one morning in March 2017, Skaf’s jeep was found parked with its light on near his apartment building. The colonel’s bloodied body lay at the bottom of a nearly 1.8m drop nearby.

He had recently retired and was running for parliament in his hometown in south Lebanon. He was 57.

Skaf’s brother Elie said the first forensic doctor to examine Skaf told him that marks on the colonel’s body suggested he had been attacked.

Two medical reports, reviewed by Reuters, found Skaf had a fractured skull and listed injuries including a swollen eye, a broken rib and bruising. The first of these documents was the official medical committee report of 2017. It concluded a fall led to a brain hemorrhage, causing Skaf’s death. It made no mention of an attack.

Unconvinced, Elie hired a forensic expert to review the case file. This doctor concluded, in the second report, dated 2018, that Skaf’s injuries suggested he was “subjected to a sudden, aggressive act that led to his fall.” The report said Skaf suffered “a strong punch to his left eye” and a “very strong kick to the bottom of his rib cage.”

Elie appointed a lawyer who asked Lebanese authorities to re-examine the case. A spokesman for Lebanon’s Internal Security Forces, which Elie said was overseeing the case, didn’t respond to a request for comment. Questions to the interior ministry were referred to the ISF.

“It’s been about a year since then, and we don’t know anything,” said Elie. “They don’t tell us anything.”

The family’s struggle to get answers has struck a chord in a country where officials are rarely held to account. In a Facebook post soon after the port blast, Skaf’s son Michel wrote: “A crime was committed in March 2017. My father did not slip and fall. He was brutally assaulted and murdered in front of his own house. The case was never closed and our family has been waiting for 3 years for a serious investigation, as his case sits on some desk gathering dust. We want a true investigation, we want justice and the truth for Colonel Joseph Skaf.”