Turkish lira drops to record low over US sanction threat 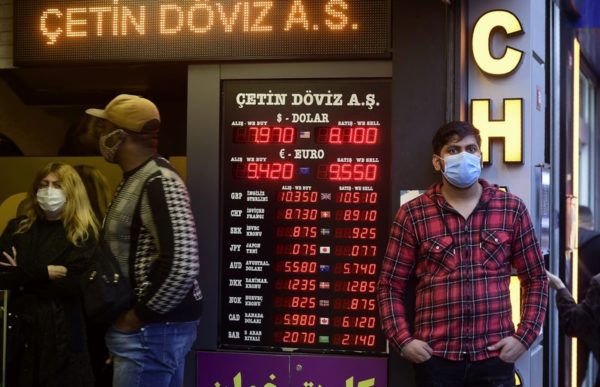 People stand outside an exchange office in landmark Taksim Square, in Istanbul, Monday, Oct. 26, 2020. The Turkish currency continued its slide to reach an all time low on Monday, after President Recep Tayyip Erdogan challenged the United States to slap sanctions over his government’s decision to test its Russian-made air defense system. (AP Photo)
Share:

ANKARA, Turkey (AP) — The Turkish currency slid further Monday to an all-time low against the U.S. dollar after President Recep Tayyip Erdogan challenged the United States to slap sanctions over his government’s decision to test its Russian-made air defense system.

The lira dropped another 1.3% to 8.06 against the dollar, a day after Erdogan dared Washington to impose sanctions after the NATO-member country tested the S-400 air defense system it purchased from Russia.

NATO has said that the Russian system poses a threat to the military alliance and particularly endangers the technical secrets of the F-35.

For months, the U.S. warned Ankara that it risked sanctions under the Countering America’s Adversaries Through Sanctions Act if the S-400 system was activated. President Donald Trump, however, has held back on implementing the sanctions amid hopes Erdogan will not go ahead with activating the missiles.

The lira has lost around 25% of its value this year as the coronavirus pandemic continues to batter the economy and amid concerns over Turkey’s troubled relations with the United States and several European nations.

The current Turkish lira was first introduced in 2001 at the rate of one USD = 1.25 TL The recent exchange rate shows that the lira is now worth 15 % its original 2001 value