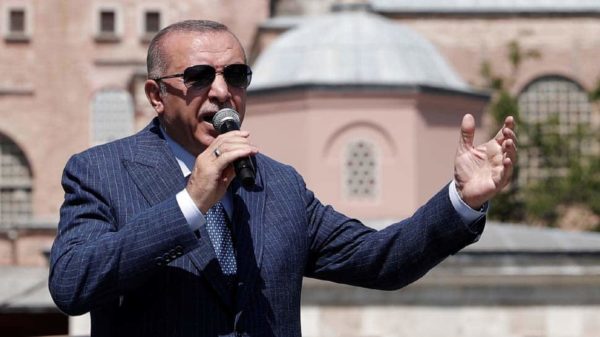 Turkish President Recep Tayyip Erdogan . Under Erdogan Turkey has become the biggest Muslim Brotherhood backer in the world. Turkey’s ruling Islamists in the Justice and Development Party (AKP) are reportedly linked to the Muslim Brotherhood
Share:

“We condemn this most disgusting effort by this publication to spread its cultural racism and hatred,” Erdogan’s top press aide, Fahrettin Altun, tweeted.

The front-page caricature of Wednesday’s edition of Charlie Hebdo, released online on Tuesday night, shows Erdogan in a t-shirt and underpants, drinking a can of beer and lifting up the skirt of a woman wearing a hijab to reveal her naked bottom.

“Ooh, the prophet!” the character says in a speech bubble, while the title proclaims “Erdogan: in private, he’s very funny”.

Charlie Hebdo’s intervention came during an escalating war of words between Erdogan, Macron and other European leaders after the beheading of French schoolteacher Samuel Paty by a suspected Islamist attacker this month.

Macron vowed that France would stick to its secular traditions and laws guaranteeing freedom of speech which allow publications such as the virulently anti-religion Charlie Hebdo to produce cartoons of the Prophet Mohammed.

Some of the weekly’s previous work lampooning the prophet was shown by Paty in a class on free speech, leading to an online campaign against him and the grisly murder before the start of school holidays on October 16.

An attack on Charlie Hebdo by jihadists in 2015 left 12 people dead, including some of its most famed cartoonists.

Macron’s defence of Charlie Hebdo, and his recent comment that Islam worldwide is “in crisis”, have prompted Erdogan to urge Turks to boycott French products amid a wave of anti-France protests in Muslim-majority countries.

Earlier Tuesday, Dutch Prime Minister Mark Rutte had come to the defence of his country’s far-right politician Geert Wilders after Erdogan brought legal action against him.

Wilders had shared a cartoon of the Turkish president wearing an Ottoman hat shaped like a bomb with a lit fuse on Twitter.

“I have a message for President Erdogan and that message is simple: In the Netherlands, freedom of expression is one of our highest values,” Rutte said.

“They are defamatory comments that are completely unacceptable, particularly against the backdrop of the horrific murder of the French teacher Samuel Paty by an Islamist fanatic,” German Chancellor Angela Merkel’s spokesman Steffen Seibert said.

Erdogan has a track record of using legal action against critics in Europe.

He brought a case in 2016 against German TV comic Jan Boehmermann, who read out a deliberately defamatory poem about the Turkish leader during his show as part of a skit designed to illustrate the boundaries of free speech.

The row put Merkel in the awkward position of signing off on criminal proceedings against the comic under an archaic lese-majeste law that was later struck from the German legal code.