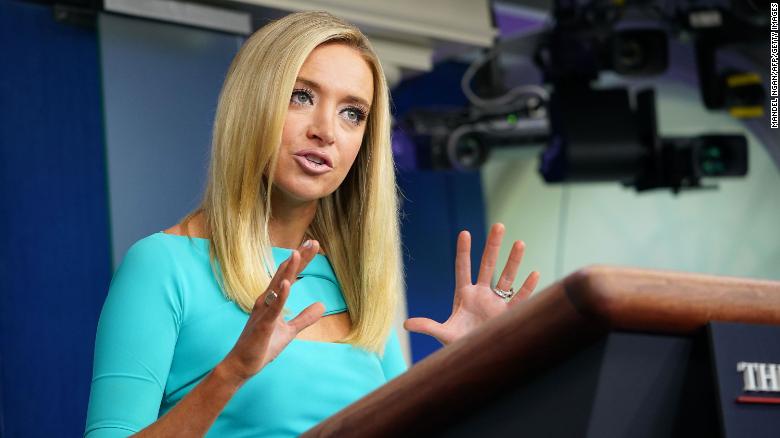 Prior to becoming a prominent backer of Donald Trump, Kayleigh McEnany praised then-Vice President Joe Biden as “funny and likable” and a “man of the people” who resonates with “middle class voters.”

As White House press secretary and before that a spokesperson for the Republican National Committee and Trump campaign, McEnany has been a relentless critic of Biden. She has mimicked many of the President’s attacks on the former vice president calling him “sleepy” and “a radical socialist.”

But in August 2015 interviews reviewed by CNN’s KFile, McEnany said Republicans would run into a problem in a potential race between Donald Trump and Biden. At the time, Biden was considering a run for the White House.

“I think the Republicans run into a problem if it is Joe Biden and if it is maybe a Trump on the other side,” McEnany said on local New York’s AM970. “Because Joe Biden, one of the things he is remarkable at is really kind of being a man of the people and resonating with middle class voters. Feeling like — coming off as human. His gaffes — as much as we make fun of them — to a certain extent they make him look human. So not, since he’s likable.”

McEnany was asked who she thought would be an easier candidate for Republicans to beat in 2016, Biden or former Secretary of State Hillary Clinton.”I think at the end of the day, probably Joe, although if Trump is against Joe, I think the juxtaposition of kind of the man of the people and kind of this tycoon, is a problem,” she said. “Although Donald Trump’s remarkably coming off as a man of the people despite being this wealthy business tycoon.”

McEnany made similar comments earlier that week on Fox Business Network, where she predicted that Biden would be the nominee.

“When you have Joe Biden here who’s funny and likeable and can resonate with the middle class, he really can speak to the average, everyday American, versus Hillary Clinton who’s cold and somber,” she said. “Remember when she had to — that calculated move of drinking a drink at a bar to seem like a human being.

Joe Biden is a human and people will resonate with that. I predict he will be the nominee.

“Biden would eventually pass on a 2016 presidential run, and Clinton would become the Democratic presidential nominee.

Responding to her 2015 comments in a statement to CNN, McEnany said that since then she has learned of what she called Biden’s “profound personal corruption” and said the former vice president has become “an empty vessel for the liberal elites and far left,” echoing attack lines often used by the Trump campaign against the Democratic presidential nominee.