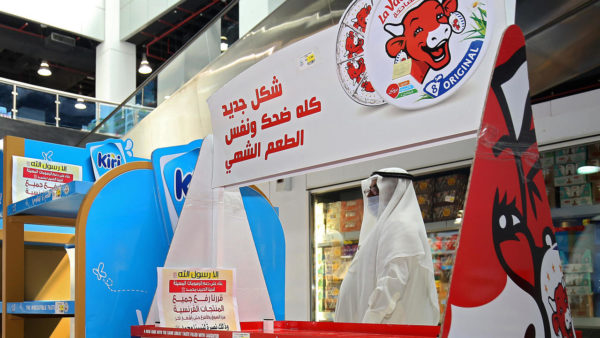 A picture shows supermarket shelves empty of French products in Kuwait City on October 23, 2020, in protest of cartoons depicting Islam’s Prophet Mohamed published in the French media. – France will not give up cartoons, President Emmanuel Macron vowed this week in a homage to teacher Samuel Paty, beheaded for having shown caricatures of the Prophet Mohamed to pupils in a lesson on free speech. Paty became the subject of an online hate campaign after he showed cartoons of the Prophet to pupils in a civics class to elicit debate on freedom of expression. © Yasser Al Zayyat / AFP
Share:

France urged Sunday Arab countries to stop calls for boycotts of French products, while President Emmanuel Macron vowed the country would never give in to Islamic radicals.

The French foreign affairs ministry said in a statement released on Sunday that in recent days there had been calls to boycott French products, notably food products, in several Middle Eastern countries as well as calls for demonstrations against France over the publication of satirical cartoons of the Prophet Mohammad.

“These calls for boycott are baseless and should stop immediately, as well as all attacks against our country, which are being pushed by a radical minority,” the statement said.

On Sunday, Macron said in a tweet: “We will not give in, ever” to Islamic radicals. “We do not accept hate speech and defend reasonable debate,” the French leader added.

We will not give in, ever.
We respect all differences in a spirit of peace. We do not accept hate speech and defend reasonable debate. We will always be on the side of human dignity and universal values.

Calls to boycott French goods are already growing in the Arab world and beyond, after President Emmanuel Macron criticised Islamists and vowed not to “give up cartoons” depicting the Prophet Mohammed.

Macron’s initial comments, on Wednesday, came in response to the beheading of a teacher, Samuel Paty, outside his school in a suburb outside Paris earlier this month, after he had shown cartoons of the Prophet Mohammed during a class he was leading on free speech.

Muslims see any depiction of the Prophet as blasphemous.

Dozens of muslim countries have already started to withdraw all French products from supermarkets under the name "for the Messenger of Allah ﷺ" after the start of the #boycott_french_products campaign, in response to the cartoon on the Prophet. pic.twitter.com/XuY3gD9aLW

Kuwait’s non-governmental Union of Consumer Co-operative Societies have already pulled several French products in boycott. Several co-ops visited by Reuters on Sunday had cleared the shelves of items such as hair and beauty products made by French companies.

“All French products have been removed from all Consumer Cooperative Societies,” union head Fahd Al-Kishti told Reuters, adding that the move was in response to “repeated insults” against the Prophet and had been taken independently of Kuwait’s government.

The co-ops, some the size of hypermarkets, carry government-subsidised staples for Kuwaitis and account for a big part of retail in the country, as well as organising some educational courses and recreational activities.

In Saudi Arabia, the Arab world’s largest economy, a hashtag calling for the boycott of French supermarket retailer Carrefour was the second most trending on Sunday.

Similar boycott calls have also been issued by groups in Jordan and Qatar.

The Organisation of Islamic Cooperation on Friday decried the brutal murder that has shaken France but also criticised the “justification for blasphemy-based harassment of any religion in the name of freedom of expression”.