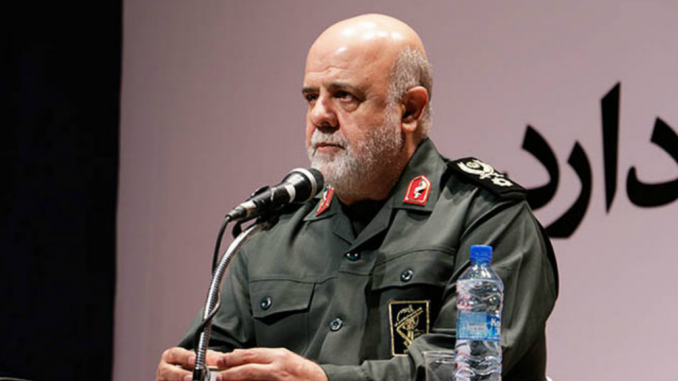 Gen. Iraj Masjedi, was appointed as Iran’s new ambassador to Iraq in April 2017. He is a former senior advisor to slain Quds commander Qasem Soleimani,
Share:

The Treasury Department on Thursday announced that it was sanctioning Iran’s ambassador to Iraq for his role in carrying out the Islamic Revolutionary Guard Corps-Qods Force’s (IRGC-QF) “destabilizing foreign agenda” in Iraq, according to a press release from the department.

The Treasury’s Office of Foreign Assets and Control said in the statement that Iraj Masjedi, a general in the Revolutionary Guard, “has directed or supported groups that are responsible for attacks that have killed and wounded U.S. and coalition forces in Iraq.”

“The Iranian regime threatens Iraq’s security and sovereignty by appointing IRGC-QF officials as ambassadors in the region to carry out their destabilizing foreign agenda,” Treasury Secretary Steven Mnuchinsaid in the press release.

“The United States will continue to employ the tools and authorities at its disposal to target the Iranian regime and IRGC-QF officials that attempt to meddle in the affairs of sovereign nations, including any attempts to influence U.S. elections,” Mnuchin added, referring to a Wednesday night announcementfrom Director of National Intelligence John Ratcliffe that Russia and Iran are behind efforts to sway public opinions related to the 2020 presidential election.

Secretary of State Mike Pompeo supported the sanction in a statement, saying, “for many years, the Iranian regime and its primary tool of regional destabilization, the Islamic Revolutionary Guard Corps-Qods Force (IRGC-QF), have exploited Iraq to advance their own interests at the expense of the Iraqi people.”

The designation came as the department also sanctioned two leaders of Hezbollah, the U.S.-designated terrorist organization backed by Iran that operates both a political party and military wing in Lebanon.

Mnuchin argued in a statement that Hezbollah Central Council members Nabil Qaouk and Hassan al-Baghdadi “are responsible for creating and implementing the terrorist organization’s destabilizing and violent agenda against U.S. interests and those of our partners around the world.”

Treasury argued in its press release that Hezbollah leaders have frequently supported the use of military action against Israel.

These actions come amid recent U.S.-brokered talks between Israel and Lebanon to end their decades-long dispute over their maritime border in the Mediterranean Sea.

The Trump administration has repeatedly rebuked Iran and the groups it supports as President Trump hopes to reduce the conflicts between Israel and surrounding Arab nations.

U.S.-Iran tensions have run particularly high throughout the Trump presidency, especially after the president withdrew the U.S. from the Iran nuclear deal and reimposed sanctions on Tehran.

At the beginning of the year, the two countries appeared to be on the brink of war after Trump ordered a drone strike in Iraq that killed Iranian Gen. Qassem Soleimani.

Iran retaliated with a missile strike on an Iraqi military base housing U.S. troops. More than 100 military personnel suffered brain injuries, but there were no deaths.

The Trump administration, however, continues to accuse Iran-backed militias of targeting U.S. interests and personnel in Iraq.

Trump has attempted to reimpose all United Nations sanctions that were lifted under the Iran nuclear deal, though the international community has largely rejected the U.S. authority to do so, given Trump’s withdrawal from the agreement.

Iran groups for interfering in US elections

The US Treasury on Thursday also slapped new sanctions on five Iranian entities for what it called “brazen attempts” to interfere with the US election and US voters.

The Treasury named the Islamic Revolutionary Guard Corps (IRGC), the IRGC-Qods Force, the Bayan Rasaneh Gostar Institute, the Iranian Islamic Radio and Television Union and International Union of Virtual Media as key actors in an effort to spread disinformation ahead of the November 3 US presidential election.

The groups have worked to “sow discord among the voting populace by spreading disinformation online and executing malign influence operations aimed at misleading US voters,” the Treasury said.

Bayan Gostar, which the Treasury called an IRGC-Qods Force “front company” for propaganda, took the lead in the activities, it said.

Ahead of the election, “Bayan Gostar personnel have planned to influence the election by exploiting social issues within the United States, including the Covid-19 pandemic, and denigrating US political figures,” it said.

“As recently as summer 2020, Bayan Gostar was prepared to execute a series of influence operations directed at the US populace ahead of the presidential election.”

The two media groups were part of that operation.

The Treasury gave no specific details on what the Iranians had done, but US social media companies have blocked accounts and postings they determined were part of Iranian government-backed influence efforts related to the election and social issues.

The sanctions, which forbid Americans and US entities from doing business with the Iranian groups, likely have little real impact, as the IRGC and IRGC-Qods Force are already subject to other sweeping sanctions.

The announcement came one day after the US Director of National Intelligence John Ratcliffe fingered Iran as behind recent emails addressed to US voters threatening them to support President Donald Trump and his Republican Party.

The emails appeared to have been sent by a right-wing US militia group, the Proud Boys, but Ratcliffe said Iran was behind them.