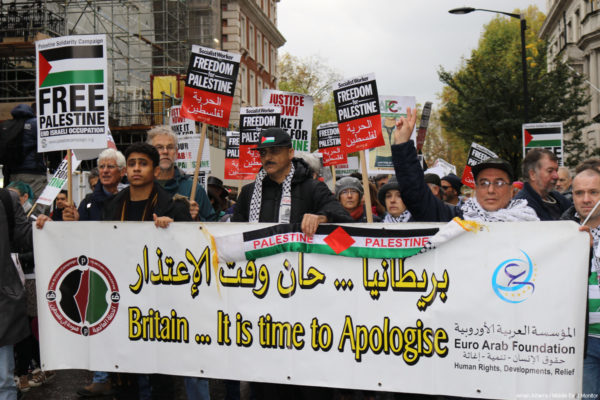 Londoners mark 100 years since Balfour Declaration in a protest to recognise the on-going oppression of Palestinians and calling for an apology from the British government, in London on November 4, 2017 ﻿
Share:

More than a hundred years after the Balfour Declaration, and the tragedies that befell the Palestinian people under the British Mandate government as a result, Palestinian businessmen and affected citizens intend to file a lawsuit against the UK government. They are demanding an apology, recognition of the State of Palestine and compensation for what Britain caused to happen to the Palestinian people. A Palestinian and international legal team are working away quietly, preparing studies and research for the case, as well as collecting testimonies. The courts in Palestine and Britain will soon begin to deal with a historic case brought by Palestinians against the British government. And why not?

Businessman Munib Al-Masri is one of those who will be filing the lawsuit. He said that the Balfour Declaration is “the root of the suffering of the Palestinian people and paved the way for the violation of their rights and the confiscation of their land and capabilities.” Al-Masri holds responsible “the British government and everyone who participated in the implementation of this permit, the massacres and tragedies that the Palestinian people were subjected to, especially the crime of uprooting and displacing them, which is ongoing.”

A group of families of the victims of the Deir Yassin, Qibya and Al-Dawayima massacres, and others who were affected directly by the crimes committed by the British government during the Mandate era in Palestine, from the early twentieth century to 15 May, 1948 are also participating in the lawsuit. This legal move represents a qualitative addition to the Palestinian struggle that could provide an opportunity to support the cause.

Former Prime Minister Theresa May angered the Palestinians when, on the centenary of the infamous letter in November 2017, she expressed her pride in the Balfour Declaration and the role Britain played in the establishment of the State of Israel. However, what was built on falsehood is inherently false, and experts in international law say that this is a sound basis on which to build the case against the British government for the catastrophe that Britain was instrumental in causing to the Palestinian people, including their displacement from their land. It is expected that the Palestinians’ lawyers will begin by referring to Balfour, and then gradually turn to a group of grave violations and war crimes committed by the British government in Palestine during the Mandate years, which continue to cause harm to the displaced and humiliated Palestinian people living under an unjust occupation created by Britain and its sinister machinations.

Neither the Palestinian Authority nor the Palestine Liberation Organisation are parties to this case. This should help the lawsuit and pre-empt any efforts to disrupt it by putting political and diplomatic pressure on the leadership.

It is not clear whether the Palestinian courts will agree to hear the case. They may, for example, try to get out of it by relying on formalities, such as questions about validity and the statute of limitations. However, the Palestinian and international legal teams say that the fact that Britain and Palestine are signatories to The Hague and Geneva conventions is binding, and that they must bear responsibility for the consequences of those agreements, which deal with the rights of peoples under foreign rule. With regard to any statute of limitations, the damage caused by Balfour and Britain has not stopped; it is ongoing. In any case, international law reserves the statute of limitations for individuals and not for states, which can be sued no matter how much time has passed.

The lawyers are preparing the case in great detail, using several legal and humanitarian sources, including a huge archive at the Palestinian Al-Quds University. Some may consider the case to be decades too late, but better late than never. What is important now is its success in highlighting the grave violations committed by the British government, while also providing a legal and political opportunity for the UK to accept responsibility for what happened and take steps to correct the historical injustice that continues to affect an entire people in the most damaging way imaginable.

If Britain has even the slightest sense of justice, then the least it can do is recognise the Palestinian state on the 1967 borders. As an initial step, that would be a hugely symbolic act of atonement for its past crimes.