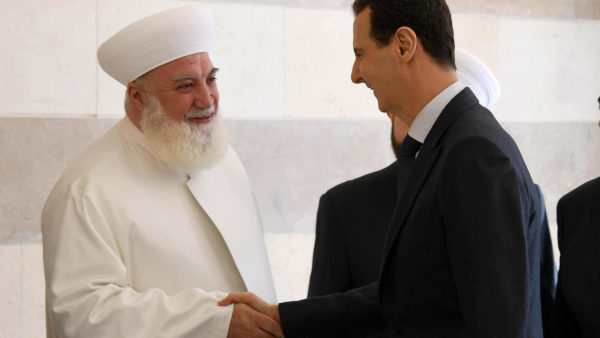 A prominent Syrian Muslim cleric in charge of the Damascus region was killed Thursday when a bomb planted in his car exploded outside the capital, state news agency SANA said.

Adnan al-Afiyuni, the Sunni Muslim mufti for Damascus province, was considered to be close to President Bashar al-Assad who hails from the Alawite offshoot of Shiite Islam.

The Syrian Observatory for Human Rights war monitor said the 66-year-old cleric played a key role in reaching reconciliation deals with rebel fighters on the capital’s outskirts during the country’s nine-year war.

Afiyuni died “as the result of an explosive device planted in his car” in the town of Qudsaya, northwest of the capital, SANA quoted the endowments ministry as saying.

In September 2016, Afiyuni led prayers as Assad made a rare public appearance to celebrate the Muslim Eid al-Adha holiday in Daraya outside Damascus after the last rebels evacuated the previous month under a surrender deal.

The Muslim cleric, who sported a long white beard, hailed the town as and example for Syria.

He told those listening , Daraya was “living proof for all Syrians that the only option available to you is reconciliation and abandoning fighting”.

Explosions have been relatively rare in and around the capital since government forces expelled the last rebels and jihadists from its doorstep in 2018.

After a string of military victories backed by key ally Russia, the government has regained control of around 70 percent of the country, the Observatory says.

The monitor says Syria’s war has killed more than 380,000 people and displaced millions from their homes since starting in 2011 with the repression of anti-government protests.