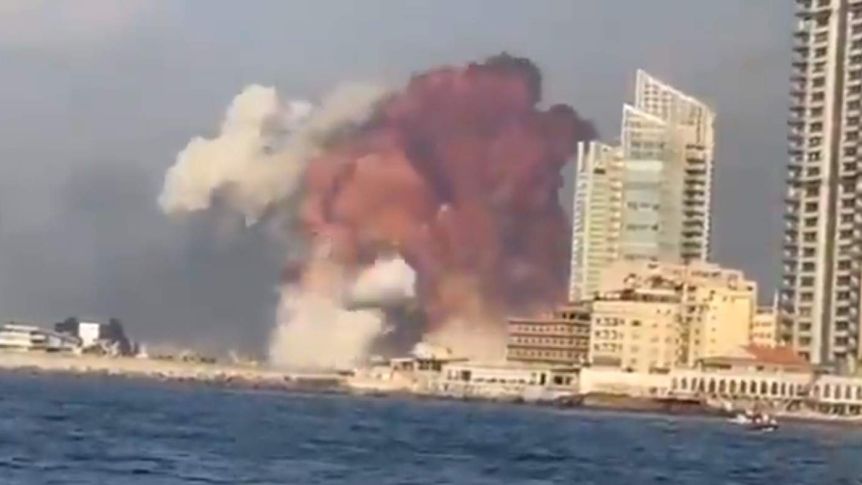 On August 4, a huge explosion at the Beirut seaport devastated the city, killing almost 200 people, injuring more than 6,000, and leaving 300,000 people without shelter. The explosion affected Lebanon’s food supply, as Lebanon imports 85 percent of its food, and the port previously handled 70 percent of the country’s imports. The explosion affected 163 public and private schools and left half of Beirut’s healthcare centers unable to operate.
Share:

A domestic investigation into the devastating explosion at Beirut’s port on August 4, 2020 has failed to yield any credible results more than two months later, Human Rights Watch said today. Political interference coupled with long-standing failings of the judicial system have made a credible and impartial domestic investigation seemingly impossible.

The International Support Group for Lebanon, meeting next week, should urge Lebanese authorities to invite the United Nations to conduct an independent inquiry to determine the causes of and responsibility for the explosion.

“Everyone in Beirut has had their life turned upside down by the catastrophic explosion that devastated half the city, and they deserve justice for the disaster inflicted on them,” said Aya Majzoub, Lebanon researcher at Human Rights Watch. “Only an independent, international investigation will uncover the truth about the blast. The International Support Group for Lebanon should not play along with the Lebanese authorities’ pretense that they are able to conduct their own credible investigation.”

On August 10, the Lebanese government referred the Beirut explosion to the Judicial Council, a special court with no appeals process. The judge leading the investigation was appointed in an opaque process shrouded in allegations of political interference, raising serious concerns about the independence of the process.

While foreign investigators – including about 50 French forensic police officers and gendarmes and the United States Federal Bureau of Investigation – have participatedin the ongoing domestic investigations at the invitation of the Lebanese authorities, their involvement does not cure the fundamental flaws with the current approach. These foreign experts’ role and their ability to speak publicly about their findings or to criticize attempts to undermine their work are unclear. France and the United States should clarify their role and mandate, and make public any attempts to obstruct justice, Human Rights Watch said.

As of October 13, local media reported that 25 people had been arrested in relation to the case and 30 had been charged. Lebanese authorities have failed to detail the evidence and charges against these individuals, and it is not clear whether they were afforded due process. Not a single minister, former or sitting, has been charged.

In August, 30 UN experts publicly laid out benchmarks for a credible inquiry, noting that it should be “protected from undue influence,” “integrate a gender lens,” “grant victims and their relatives effective access to the investigative process,” and “be given a strong and broad mandate to effectively probe any systemic failures of the Lebanese authorities.” But the domestic investigation into the Beirut blast has failed to meet either international standards for due process or the benchmarks the UN experts identified. Instead, the investigation has centered around administrative port and customs officials, raising concerns that political officials credibly implicated in the blast will escape accountability.

“The responsibility for the Beirut explosion extends far beyond port and customs officials,” Majzoub said. “Any investigation that claims to be impartial would look into the corruption and mismanagement permeating the entire political system, which created the conditions that made the Beirut blast possible.”

Following the explosion, officials traded blame over who was responsible. Court records and official correspondence leaked to the media indicate that many high-level officials, including the president, security officials, and members of the judiciary, were aware of the dangerous stockpile of ammonium nitrate at the port but failed to take action. Reuters quoted an unnamed official source saying that initial investigations “indicate years of inaction and negligence” over the storage of the highly explosive ammonium nitrate.

The domestic investigation’s lack of independence and transparency has led to a widespread loss of public faith in the process, prompting many victims and their families to call for an international investigation. Human Rights Watch, as well as other human rights groups including Amnesty International, have said there should be an international inquiry. Lebanese officials have rejected these calls, and President Michel Aoun described any such investigation as a “waste of time.”

There have been two fires in the Beirut port since the explosion, on September 8 and September 10, prompting many allegations of tampering with the crime scene. The head of the Beirut Bar Association, Melhem Khalaf, told AFP that he was alarmed by the fires, calling them “unacceptable” and added that “preserving the (blast) crime scene was the first thing we asked” of the investigation.

In 2018, the United Nation’s Human Rights Committee expressed concern about the “political pressure reportedly exerted on the Lebanese judiciary, particularly in the appointment of key prosecutors and investigating magistrates, and about allegations that politicians use their influence to protect supporters from prosecution.” These structural weaknesses in the Lebanese system remain obstacles to delivering justice in the current context.

“The Lebanese authorities’ failings over the past two months have shown that an international investigation is the only avenue for the people of Lebanon to get the answers and the justice that they deserve for the Beirut explosion,” Majzoub said. “But it has also underscored the importance and urgency of addressing the structural weaknesses preventing Lebanon’s judiciary from independently and impartially delivering justice.”

Problems with the current investigation

On August 4, a huge explosion at the Beirut seaport devastated the city, killing almost 200 people, injuring more than 6,000, and leaving 300,000 people without shelter. The explosion affected Lebanon’s food supply, as Lebanon imports 85 percent of its food, and the port previously handled 70 percent of the country’s imports. The explosion affected 163 public and private schools and left half of Beirut’s healthcare centers unable to operate.

President Aoun and then-Prime Minister Hassan Diab said the explosion was caused by 2,750 tons of ammonium nitrate that had been stored in a warehouse in the Beirut port for over six years without appropriate safety precautions. The circumstances that led to the detonation of the material are not yet clear.

President Aoun promised a transparent investigation into the causes of the explosion. However, the investigation conducted by domestic authorities has been neither transparent nor independent and fails to meet international fair standards.

On August 5, the cabinet set up an “administrative investigation committee” headed by Diab and consisting of the ministers of defense, justice, and interior, as well as the army commander and heads of the three security agencies, and tasked it with submitting the results of its investigation to the cabinet within five days. This committee has not made any public statements, and it seems to have stopped work after the resignation of Prime Minister Diab’s government on August 11.

By tasking the very same ministries and institutions that should be under investigation to lead the investigation, the cabinet engaged in a ludicrous perversion of the principles of independence and impartiality, Human Rights Watch said. Both the Lebanese Judges’ Association and the head of the Beirut Bar Association criticized the formation of the committee

Separately, on August 5, the country’s top public prosecutor, Ghassan Oueidat, requested an Internal Security Forces (ISF) investigation into the ammonium nitrate and asked the ISF to provide him with the names of those responsible for overseeing its storage and security. On August 10, Oueidat announced that, following an investigation under his supervision, along with the military prosecutor, Fadi Akiki, 19 suspects had been detained. He did not announce their names or the charges against them. It was not clear whether they were afforded due process.

On August 10, Queidat, the public prosecutor, recommended that the Cabinet refer the case to the Judicial Council, which the Cabinet did on the same day. Justice Minister Marie-Claude Najm, in turn, appointed Judge Fadi Sawan to serve as a judicial investigator.

The appointment of the judicial investigator was an opaque process mired in allegations of political interference. The Higher Judicial Council rejected two judges the justice minister initially proposed, but refused to explain the decision, stating that their deliberations are confidential.

The judiciary has provided very little information to the public about Judge Sawan’s investigation. Almost all information about the status of the case has come through media leaks, some of which have been inaccurate.

As of October 13, local media reported that 25 people had been arrested in relation to the case, 30 had been charged, and Judge Sawan had heard the testimony of 47 witnesses. The evidence and charges against those arrested have not been made public. However, more than two months into the investigation, not a single minister, former or sitting, has been questioned as a suspect. The judicial investigator has listened to testimony of current and former ministers as “witnesses” in cases against port and other administrative employees.

The Judicial Council is operating on the presumption that it does not have the jurisdiction to prosecute sitting or former presidents and ministers. It argues that, due to legal immunity for public officials, only the “Supreme Council for Trying Presidents and Ministers,” a body consisting of seven parliament members elected by parliament and eight judges appointed by the judiciary, can do so. But the council has not yet been created.

The Lebanese Judges’ Association disputed this reading of the law, contending that the crime of killing or causing the death of citizens is not subject to immunity, as it is not directly related to the exercise of duties in office. The Judges’ Association further stated that prosecution by the “Supreme Council” was virtually impossible due to the “existing political corruption and sectarian divisions in the country, as well as the record of the parliament that is devoid of any prosecutions.”

The HJC, the body responsible for recommending the appointment of judges to specific courts, however, lacks independence, and has been a vehicle for political interference in the judiciary. Eight of its ten members are appointed by the executive branch, and the council lacks financial independence, as funds are allocated to it annually through the Justice Ministry’s budget. The Lebanese Judges’ Association has been an outspoken critic of the lack of the judiciary’s independence and has been leading an effort for reform.

Lebanon should adjust the Code of Criminal Procedure so that its provisions comply with the principles of a fair trial, and pass the law to provide for the independence of the judiciary that has been languishing in parliament for years, Human Rights Watch said.

The Judicial Council has failed to take action against allegations that evidence has been tampered with, further decreasing confidence in the investigation’s credibility. Journalists from the local TV station Al Jadeed presented evidence that officials removed documents from the public works ministry – which oversees the port – on August 9.