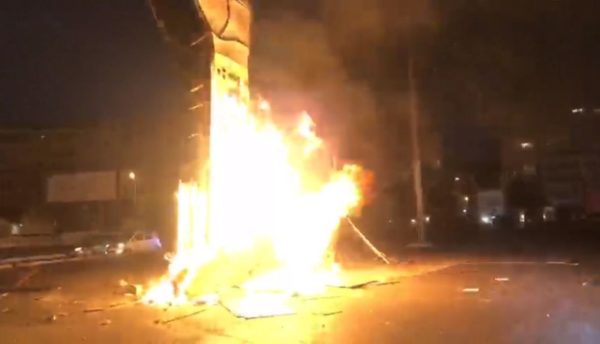 File photo : Fist of the revolution on fire . It is the symbol of the October 2019 uprising in Lebanon. Supporters of the Iranian backed Hezbollah militant group and its ally the Amal Movement torched the fist of the revolution and attacked the revolutionaries on Nov 22, 2019. In a blow to Hezbollah, the candidates of the uprising scooped a minimum of 10 seats in the weekend election
Share:

Rival protests were staged Wednesday evening in downtown Beirut on the eve of the binding parliamentary consultations to pick a new premier.

As anti-government protesters marched from an area near parliament towards the Center House ( former OM Saad Hariri’s residence) in rejection of his expected return as PM , while backers of his party the al-Mustaqbal Movement staged a rival rally in the area in his support.

Hariri resigned as premier in October 2019 in the wake of unprecedented street protests, but he is now expected to make a comeback at the helm of the next government. So far he seems to be the only candidate

Security forces separated between the two sides to prevent any violence, as activists accused Hariri’s supporters of hurling stones at them.

Al-Mustaqbal supporters were accused of torching the “fist of the revolution” statue at nearby Martyrs Square.

But Al-Mustaqbal denied the accusations and “condemned” the incident and asked security agencies to “arrest the culprits whoever they may be.”

Hezbollah and Amal supporters have in past torched the “fist of the revolution” and attacked the revolutionaries on several occasions.