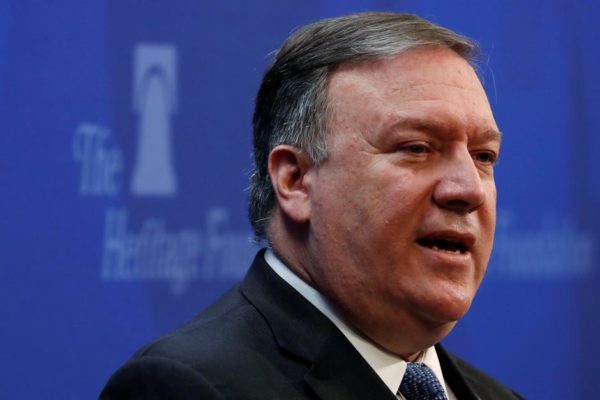 FILE PHOTO: U.S. Secretary of State Mike Pompeo . He warned France that its efforts to resolve the crisis in Lebanon would be in vain without immediately tackling the issue of Iran-backed Hezbollah’s weaponry.
Share:

U.S. Secretary of State Mike Pompeo on Monday called for the formation of a new Lebanese government that has the “ability” to “implement reforms.”

Pompeo, spoke on Monday with Lebanese President Michel Aoun and welcomed the start of negotiations between Lebanon and Israel on the common maritime boundary.

“I also underscored the importance for Lebanon’s political leaders to implement reforms as called for by the Lebanese people,” Pompeo tweeted.

Aoun said on Friday that Lebanon “heavily relies” on Washington to mediate talks with Israel on the maritime border . Aoun expressed hope that the US would help the sides overcome any difficulties that may arise .

Pompeo told Aoun that the US would send Lebanon aid to rebuild areas damaged by the deadly Aug. 4 port blast, according to a statement by the Lebanese presidency

“We will send aid to rebuild neighborhoods that were damaged in Beirut as a result of the explosion that occurred in the port on August 4,” Pompeo was quoted in a tweet published by the presidency as telling Aoun in a phone call.

Lebanese and Israeli delegations Wednesday formally marked the start of indirect talks to demarcate their land and maritime borders .