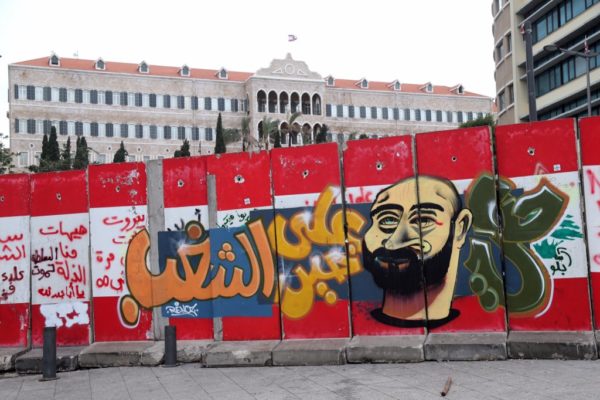 A wall that was installed last year near the Grand Serail BY the by security forces to keep protesters away was dubbed “the wall of shame” by demonstrators who have turned it into a canvas for anti-government graffiti and slogans.
Share:

BEIRUT, Lebanon – A year after protests broke out against the government in Lebanon, activists have raised hope for change and shaken the political leadership — but not enough to bring down the ruling elite.

“This is a long road, which will not succeed only by going to the streets once or twice or even for a year,” Makram Rabah, an activist and lecturer of history at the American University of Beirut, told UPI.

The demonstrations were triggered by a government decision to impose a new tax on WhatsApp calls and soon turned into an unprecedented popular uprising before being slowed by the COVID-19 pandemic.

Anger, frustration and despair over the country’s deterioration and the leaders’ failure to address the acute economic crisis and financial collapse deepened after the Aug. 4 blast at the Beirut port, which killed nearly 200 people and left 300,000 homeless.

“After everything we have seen, including the port explosion massacre, it is a matter of life and death for us. Throwing rocks and wishing the politicians sickness or death… this is a simple act of resistance,” Nizar Hassan, a political activist, told UPI. “When all channels of change are blocked, you just wish your oppressor would vanish from existence.”

Although the uprising attracted people from all sectarian backgrounds, breaking the confessional system in place and foiling the leaders’ counterrevolution attempts to revive sectarianism will take more.

Hassan noted that the pressures exerted by the protesters in the streets, including the disruption of institutions and economic activity, were temporary.

“We are dealing with an extremely stubborn ruling class who prioritizes its continuity over the survival of Lebanon and its people,” Hassan said. “It is clear that the political leaders have no problem in accelerating the country’s crises and financial meltdown by hanging to the status quo and refusing to pass the urgently needed laws and reforms.”

Adopting reforms is the only way out for the bankrupt country. Without them, donor countries and the International Monetary Fund will not provide financial aid.

“It is true that the ruling establishment still holds all links to power. However, something really important has been achieved, which is basically destroying the idea that the system is too big to fail or that there is an invisible safety net that can always catch the economy of this country,” Rabah said

The uprising, which some still prefer to call a revolution, has created a strong desire for change, according to many activists.

Pierre Issa, Secretary-General of the National Bloc Party, referred to a recent study, which revealed that 74% of the Lebanese population oppose the ruling elite and support change; a percentage that has increased after the Beirut explosion.

However, creating an organized political opposition front that would challenge the well-established traditional ruling parties, headed by former warlords of the 1975-90 civil war, is no easy task.

“They have been in power for 45 years, abused everything and prevented any opposition,” Issa told UPI. “Would it be possible to have an opposition and create a credible and trustworthy alternative [to the ruling power] in just one year?”ADVERTISEMENT

Some groups within the uprising have been active and organizing their ranks; others need more time, he said.

“We want an effective democracy, a new social-economic system that secures social justice and creates job opportunities, a fair distribution of wealth, a new foreign policy that guarantees sovereignty and stability as well as a supervised early parliamentary elections,” Issa said.

To Hassan, the infrastructure of political opposition is still in its infancy, and a lot of groups remain informal or based around a few individuals. “With only a handful of serious political organizations, creating a clear political alternative is hard,” he said.

But the country is running out of time to avoid total collapse and another cycle of violence that would push the people again to seek protection from their own sectarian leaders.

“We are not heading to a civil war because Lebanon is no longer as important as it was in 1975,” Rabah said. “Certainly, there is always such a risk because simply the political parties will get a kind of a bailout if a civil war breaks out. They are very much versed in using sectarian identities and collective memories to mobilize their own community. At the moment, the only people who can actually benefit from a civil war is Iran and Hezbollah.”

Feeding a population of 2.7 million poor Lebanese and more than 1.7 million Syrian and Palestinian refugees will be a challenge to those who are still in power.

“They don’t have the luxury of time. Wait and see how they will provide food for all those people,” Issa said.