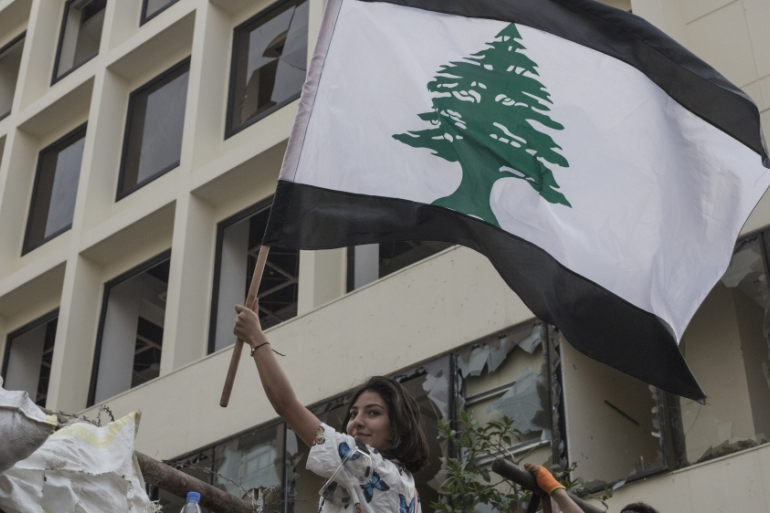 An anti-government protester holds a Lebanese flag which has had the usual red stripes replaced with black as a sign of mourning, during a demonstration on September 1, 2020 in Beirut, Lebanon [Sam Tarling/Getty Images]
Share:

One year on from the start of mass protests in Lebanon, the authorities have not only failed to address people’s legitimate demands for their social and economic rights, but have also increasingly resorted to repressing the rights to peaceful assembly and freedom of expression, said Amnesty International today.

Since the outbreak of protests on 17 October 2019, the Lebanese authorities repeatedly resorted to excessive use of force against largely peaceful protesters by way of beatings, teargas, rubber bullets, and at times live ammunition. They further failed to protect protesters from attacks by armed supporters of political parties. In addition, they sought to repress the protest movement by arbitrarily arresting, detaining and prosecuting activists and journalists, including before military courts.

“Over the past year, protesters have again and again taken to the streets in largely peaceful demonstrations, despite the threat of being beaten, arrested or summoned from their homes. Many took to the streets after Beirut’s devastating explosion, even bearing injuries, yet were still shot at by security forces,” said Lynn Maalouf, Amnesty International’s Deputy Regional Director for the Middle East and North Africa.

Instead of focusing on addressing the legitimate demands that sparked the protests, the authorities have sought to intimidate and silence activists and critics. From November 2019 onwards and to date, Amnesty International documented how the Lebanese authorities launched a campaign of intimidation, summoning and questioning over 80 activists for legitimate acts of freedom of expression online, or for participating in protests which were critical of the authorities.

Amnesty International calls on the Lebanese authorities to cease their harassment of activists and journalists associated with the October protest movement. They must respect the right to exercise freedom of speech and end the use of excessive force against peaceful protesters. They must also investigate and hold accountable officers and officials who are proven responsible for violations of people’s rights to free expression, assembly and justice.

On 17 October 2019, unprecedented mass protests broke out across Lebanon. For weeks, tens of thousands of peaceful protesters assembled in cities, towns and villages across the country, expressing long-standing grievances related to their social and economic rights in the context of a rapidly deteriorating economic situation. Lebanese military and security forces responded to the largely peaceful protests with beatings, teargas, rubber bullets, and at times live ammunition and pellets. Hundreds of protesters were rushed to hospitals with wounds to their eyes, heads, necks and chests, while dozens were arrested and unlawfully detained. In detention, many reported being subjected to severe beatings, sometimes amounting to torture.

On 8 August, thousands took again the streets in anger and mourning following the Beirut Port explosion on 4 August. Their main call was accountability: holding accountable the officials responsible for endangering civilian lives. Instead, the army and security forces shot at unarmed crowds, injuring more than 230 people, with some being injured by pellets shot in their eyes and others by teargas cannisters shot at their heads and faces.

Families of the victims, civil society and international organizations including Amnesty International have called for an international investigation, due to their lack of trust in the state. Instead, Lebanese authorities referred the investigation to the Judicial Council, a court of exception whose proceedings inherently lack independence, impartiality, and jurisdiction to prosecute sitting officials, despite serious allegations against state bodies.