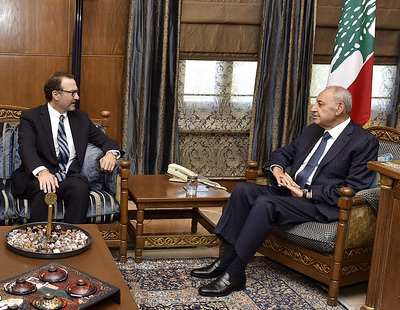 U.S. Assistant Secretary of State for Near Eastern Affairs David Schenker, the top American diplomat for the Middle East, did not speak to reporters after his meeting with Parliament Speaker Nabih Berri.

Berri has been the main Lebanese official dealing with U.S. mediators regarding the dispute with Israel over the past decade.

On Wednesday, Schenker attended the opening session of in a U.N. compound in the border area known as Ras Naqoura. A joint statement released Wednesday by the U.S. State Department and Jan Kubis, the U.N. special coordinator for Lebanon, said the Israeli and Lebanese teams “held productive talks and reaffirmed their commitment to continue negotiations later this month.”

Israel and Lebanon have no diplomatic relations and are technically in a state of war. They each claim about 860 square kilometers (330 square miles) of the Mediterranean Sea as being within their own exclusive economic zones.

Israel has already developed a natural gas industry elsewhere in its economic waters, and Lebanon hopes oil and gas discoveries in its territorial waters will help it overcome the worst economic and financial crisis in its modern history.

Lebanon’s economic crisis is the result of decades of corruption and mismanagement, but has been dramatically worsened by the coronavirus pandemic as well as , which killed and wounded many and caused damage worth billions of dollars.

Schenker visited Beirut after the blast and met members of Lebanon’s civil society. He did not hold talks with politicians at that time.

The international community has said it will not help Lebanon get out of its economic crisis before it implements major reforms, on top of fighting corruption.

President Michel Aoun was scheduled to hold binding consultations with members of parliament on Thursday to name a new prime minister, but postponed it for a week at the last minute.

A top candidate for the post was former Prime Minister Saad Hariri. He resigned in October last year, days after nationwide protests broke out demanding an end to the rule of the political class that’s brought the country to the verge of bankruptcy.

On Wednesday, Hariri failed to win the backing of the two largest Christian blocs in parliament.

Schenker is expected to meet with President Michel Aoun at Baabda Palace during his four-day visit to Beirut al-Joumhouria daily reported on Thursday.

Schenker had met ًWednesday with Maronite Patriarch Beshara el-Rai in Bkirki. He declined to make any statement to reporters afterwards.

“It takes two to tango “

The International Monetary Fund is reportedly willing to work with Lebanon to solve its financial problems and restructure its debt, but needs a partner in the Lebanese government, IMF Managing Director Kristalina Georgieva said on Wednesday.

“It takes two to tango,” Georgieva told CNN during the annual meetings of the IMF and World Bank