Behind in polls, Trump returns to the campaign trail after being hospitalized for Covid-19 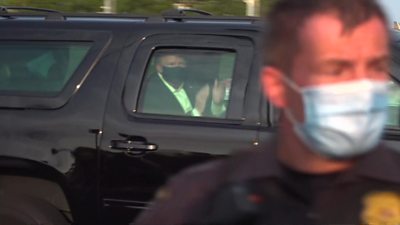 US President Donald Trump has made a short trip to wave to the crowds of people lining the streets outside the hospital where he is being treated for coronavirus.
Share:

President Donald Trump, trailing in the polls with the election just three weeks away, returns to the campaign trail on Monday after being hospitalized for Covid-19, embarking on a sprint through key swing states.

As Trump heads for Florida — the first of four battleground states he plans to visit over the next four days — his Democratic opponent Joe Biden will be touting his economic plans in the midwestern state of Ohio.

Trump, 74, who has declared himself “immune” after catching the coronavirus, plans to hold an outdoor campaign rally on Monday evening at the airport in Sanford, Florida.

White House Press Secretary Kayleigh McEnany, who has been in quarantine since testing positive for Covid-19, said rally attendees would be encouraged to wear masks and hand sanitizer would be made available.

“Ultimately, you have a right in this country to show up and express your political viewpoint,” McEnany said on “FOX & Friends.”

White House doctors gave Trump the all-clear on Saturday to return to the campaign trail after he was ruled no longer a coronavirus transmission risk but his claim of immunity is unproven.

Twitter on Sunday hid a tweet from Trump in which he said he was immune, saying the post violated its rules about misleading and potentially harmful misinformation.

Trump is to visit Florida, Pennsylvania, Iowa and North Carolina this week as part of a push to make up ground on Biden, who has a double-digit lead in the national polls according to the RealClearPolitics website.

As Trump prepared to leave the White House for the first time since returning on October 5 after three nights at Walter Reed Medical Center, he fired off a series of tweets.

He began the day by lauding his Supreme Court nominee Amy Coney Barrett, whose confirmation hearings in the Senate Judiciary Committee began on Monday.

The Republican-controlled Senate is expected to swiftly confirm the 48-year-old judge, potentially shifting the nation’s highest court firmly to the right for generations.

Trump claimed that Democratic-run California and New York were “going to hell,” attacked the media and dismissed the polls which show him trailing the 77-year-old Biden.

“The Lamestream Media has gone absolutely insane because they realize we are winning BIG in all of the polls that matter,” Trump said. “They write or show one false story after another. They are truly sick people. VOTE!!!”

He accused Democrats of wanting to turn the United States into a “Socialist Nation” and praised the performance of the stock market under his watch.

Trump repeated accusations that the November 3 election would be “rigged” against him and said the Covid-19 pandemic which has left nearly 215,000 people dead in the United States will eventually “run its course.”

“Vaccines and cures are coming fast!” he said.

Trump won Florida, Pennsylvania, Iowa and North Carolina — the four states he is visiting this week — in 2016 against Hillary Clinton but he is trailing former vice president Biden in all four this time around according to an average of state polls by RealClearPolitics.

Biden has razor-thin leads in Iowa and North Carolina, according to RealClearPolitics, but is leading by more substantial margins in Florida and Pennsylvania — 3.7 points and 7.1 points respectively.

Biden attacked Trump’s planned Florida visit saying he was “bringing nothing but reckless behavior, divisive rhetoric, and fear mongering” to the Sunshine State.

“But, equally dangerous is what he fails to bring: no plan to get this virus that has taken the lives of over 15,000 Floridians under control,” Biden said in a statement.