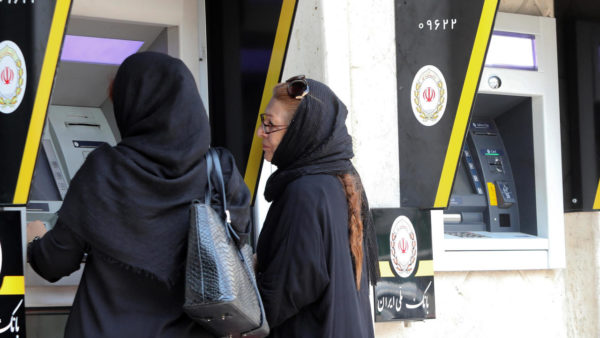 The Treasury Department said it was designating 18 major Iranian banks, a move that could largely cut off the nation of 80 million people from the world’s financial system just as it tries to cope with the Middle East’s worst Covid-19 outbreak.

The United States defied concerns from European allies that the sanctions could cause needless suffering and insisted it was making exemptions for humanitarian trade.

The Trump administration did not list specific accusations against most of the banks, instead declaring broadly that the entire Iranian financial sector may be used to support the government’s contested nuclear program and its “malign regional influence.”

“Our sanctions programs will continue until Iran stops its support of terrorist activities and ends its nuclear programs,” he said in a statement.

Iranian Foreign Minister Mohammad Javad Zarif accused the United States of trying to “blow up our remaining channels to pay for food and medicine” during the pandemic.

“Iranians WILL survive this latest of cruelties. But conspiring to starve a population is a crime against humanity,” Zarif wrote on Twitter.

“Culprits & enablers — who block our money — WILL face justice.”

The Treasury Department said it was exempting transactions in humanitarian goods such as food and medicine.

But European diplomats and some experts say US sanctions nonetheless have dire consequences, with few institutions willing to take the risks of legal action in the world’s largest economy.

Barbara Slavin, director of the Future of Iran Initiative at the Atlantic Council, described the move as “sadism masquerading as foreign policy,” saying it would only hurt ordinary people and encourage smuggling, working against sanctions that are already in place.

The Treasury Department said the sanctions will be effective in 45 days, giving companies time to wind down transactions in Iran.

The timeframe will also give anyone working with Iran a chance to see the November 3 election, with polls showing Trump trailing Democrat Joe Biden, who supports a return to diplomacy.

Trump has pursued a policy of “maximum pressure” aimed at reining in Iran, the arch-rival of US allies Saudi Arabia and Israel.

The Trump administration has already moved to stop all Iranian oil exports and bolted from a deal negotiated under former president Barack Obama through which Iran curtailed its nuclear program.

Since Trump’s imposition of unilateral sanctions, Iran has taken small but steady moves away from the nuclear accord.

Biden’s running mate pick Kamala Harris, in a debate Wednesday with Vice President Mike Pence, said the pullout from the accord has led to Iran building “what might end up being a significant nuclear arsenal.”

The US had been part of the Iran nuclear deal along with world allies but “because of Donald Trump’s unilateral approach to foreign policy, coupled with his isolationism, he pulled us out and has made America less safe,” she said.

The Trump administration has repeatedly butted heads on Iran with European allies, who most recently rejected a US legal argument that Washington can revive UN sanctions against Tehran.

Behnam Ben Taleblu, a senior fellow at the Foundation for the Defense of Democracies, a group close to the Trump administration that advocates hawkish policies on Iran, said the latest sanctions showed that Washington still had more leverage in pressuring Iran.

“These sanctions could go away, just like the others, if Tehran decided to act like a normal nation and put national interest and the welfare of its own people over the revolutionary priorities of the regime,” he said.