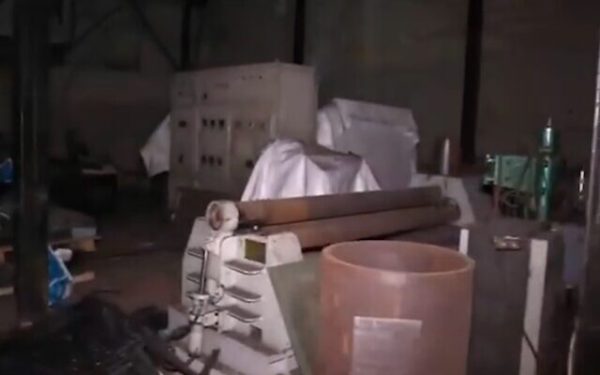 A roller machine in an alleged Hezbollah missile facility in Beirut’s al-Janah neighborhood that the Israeli military says is used in the production of missiles on October 2, 2020. (Israel Defense Forces)
Share:

The Israeli army released videos on Friday meant to prove the presence of Hezbollah missile factories in the suburbs of Beirut, despite the denials of the Lebanese Shiite movement.

On Tuesday, Israeli Prime Minister Benjamin Netanyahu accused Hezbollah of manufacturing and storing weapons near fuel facilities in Beirut and warned of a “another tragedy” in the event of an explosion.

On August 4, thousands of tonnes of ammonium nitrate stored in a warehouse at Beirut’s port exploded, killing more than 190 people, injuring thousands and ravaging large parts of the city.

What else is Hezbollah trying to hide in Beirut?

Shortly after we exposed a Hezbollah Precision Guided Missile manufacturing site in the Chouaifet neighborhood, we identified suspicious traffic leaving the location to another Hezbollah facility in Borj el-Brajneh: pic.twitter.com/GqW426904X

“We don’t store rockets at Beirut port, nor do we put them next to gas stations,” he said in a televised address.

“We will allow media outlets to go into this site and see what’s there,” he said.

Dozens of journalists, including an AFP photographer, then went to the site located in Jnah, in Beirut’s southern suburbs.

There they saw heavy machinery inside a two-storey warehouse.

“This is a normal industrial site,” said Hezbollah spokesman Mohammad Afif, who accompanied the group.

In the latest salvo in the media war between Israel and Hezbollah, the Israeli army on Friday posted a video on its WhatsApp and Twitter accounts showing the equipment journalists had filmed at the Beirut site.

The army said the cutters could be used to create “warheads” and “stabilisation fins”, and the two other machines to form metal cylinders used in building missiles able to strike strategic targets in Israel.

In addition to the Jnah factory, the Israeli military on Tuesday said it had located weapons plants under residential properties in Beirut’s Laylaki and Choueifat districts.

“It’s as if the parking lot of these buildings is a precision missile manufacturing plant,” an Israeli military official told AFP on Friday, requesting anonymity.

In a second video, the army showed aerial footage that it said was shot the day after Netanyahu’s statement, of “suspicious traffic” between the Choueifat location and “another Hezbollah facility” in the southern suburb of Burj al-Barajneh, implying that equipment had been moved.

Hezbollah and Israel fought a devastating month-long war in 2006 which killed more than 1,200 on the Lebanese side, mainly civilians, and 160 on the Israelis side, most of them soldiers.

Israel has also carried out dozens of air strikes on Hezbollah targets in neighbouring Syria, where the group is fighting alongside the government of President Bashar al-Assad.

Israel and Lebanon are still technically at war, and their common border, patrolled on the Lebanese side by a UN force, remains the scene of sporadic skirmishes.

Nevertheless, the two neighbours on Thursday announced forthcoming talks, under UN mediation, on a dispute over their maritime border.

The issue of the sea frontier is particularly sensitive, as Lebanon wants to drill for hydrocarbons in a part of the Mediterranean disputed by Israel.