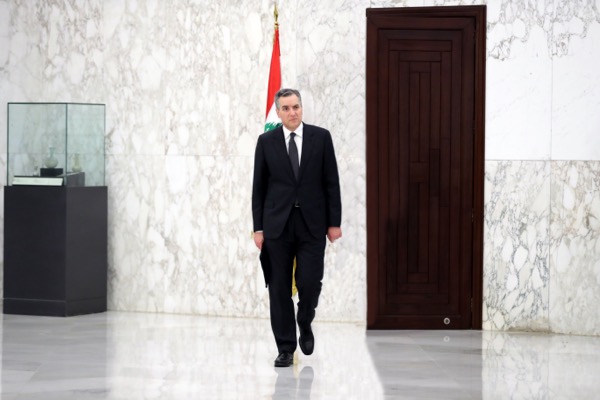 Lebanon’s premier-designate is shown inside the Baabda palace on Saturday Sept 26 . He recused himself from forming a new cabinet after the so called Shiite duo refused to budge on their demand to keep the finance ministry under their control despite the recent US sanctions against its minister Ali Hassan Khalil over the way he handled the ministry . Photo credit Dalati and Nohra
Share:

Lebanon’s premier-designate recused himself from forming a new cabinet Saturday as international pressure mounts for a reform-minded administration to replace the government that resigned after a deadly August port blast.

“I excuse myself from continuing the task of forming the government,” Mustapha Adib said in a televised speech, apologising to the Lebanese people for his “inability to realise its aspirations for a reformist team” to save the country.

Lebanon’s last government resigned in the aftermath of the colossal blast in Beirut port on August 4 that killed more than 190 people, wounded thousands and ravaged swathes of the capital.

Since his nomination on August 31, Adib has been under pressure to form a new cabinet as soon as possible, so it can carry out the necessary reforms to unlock billions of dollars in foreign aid.

Adib’s efforts to come up with a new line-up have been effectively blocked by the two main parties representing Lebanon’s large Shiite community — Amal and Hezbollah.

The two parties have refused to budge on their demand to keep the finance ministry under their control, a position analysts say is linked to recent US sanctions against a former minister from Amal, as well as Hezbollah-linked businesses.

Even before last month’s blast, Lebanon was already mired in its worst economic crisis since the 1975-1990 civil war and battling the novel coronavirus pandemic.