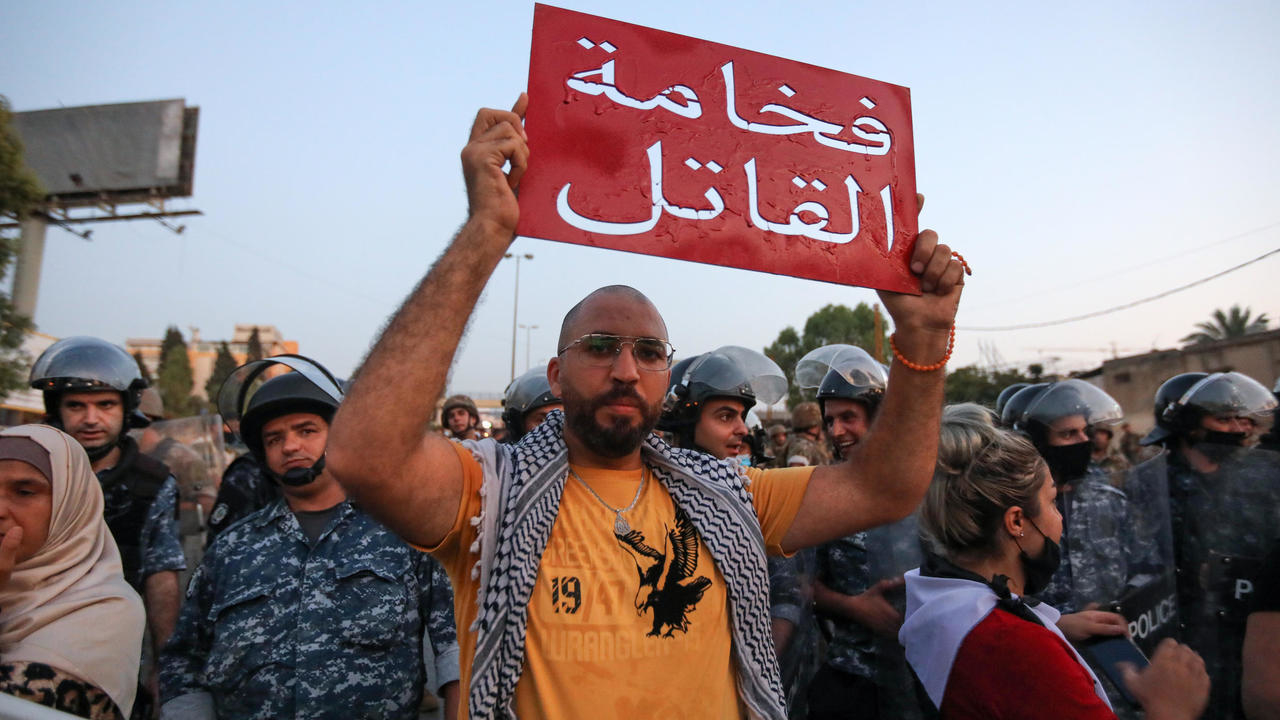 A Lebanese protester holds a banner that reads in Arabic “Your highness the murderer” in a September 2020 protest demanding progress in an investigation into a deadly port blast ANWAR AMRO AFP/File
Share:

United Nations- France on Wednesday urged international pressure to form a new government in Lebanon, as frustration grows with the pace of reform in the wake of the giant Beirut port explosion.

“The political forces have still not succeeded in agreeing to form a government,” French Foreign Minister Jean-Yves Le Drian told a videoconference meeting on Lebanon on the sidelines of the United Nations General Assembly.

“Strong and convergent pressures are therefore needed from us to push Lebanese officials to respect their commitments,” he added.ADVERTISING

“These convergent efforts must continue as long as necessary,” he said.

President Emmanuel Macron, who has visited the former French colony twice in the wake of the explosion, had repeatedly urged the Lebanese not to waste any more time in forming a government.

Prime minister-designate Mustapha Adib is under pressure to form a fresh cabinet as soon as possible so it can undertake long-sought economic reforms.

But Adib’s efforts to form a government have been effectively blocked by the two main Shiite groups in Lebanon’s usual power-sharing arrangement — Amal and Hezbollah.

The August 4 explosion of hundreds of tons of ammonium nitrate at the Beirut port killed more than 190 people, wounded thousands and ravaged large parts of the capital.

The disaster sparked new protests over corruption and mismanagement, prompting the previous cabinet to step down.

France is counseling pragmatism to break through the impasse but it has limited room to maneuver.

The United States and Saudi Arabia are cautious about the French initiative as they are seeking to sideline Hezbollah, which is aligned with their enemy Iran.

France, however, said it enjoyed support from Italy which agreed on the need for a new government to be installed quickly and undertake reforms.

“Without reforms, there will not be any international financial support. On the other hand, if they are put in place, we will spare no efforts,” Le Drian said.

In addition to the port blast, Aoun said Lebanon was in “unprecedented crisis” from Covid-19 and the influx of displaced Syrians whose numbers are now equal one-third of Lebanon’s population.

“Lebanon repeats its call on donor countries to honor their pledges and find a mechanism to follow up on their commitments,” Aoun said in a virtual address.

“The latter need to double their financial contributions and provide direct assistance to Lebanese governmental institutions and host communities.”

An international conference in Paris in April 2018 promised $11 billion for Lebanon, but on the condition of reforms that have yet to be put in place.

Aoun said Monday that Lebanon was headed to “hell” unless it can form a new cabinet.

France hailed as “courageous” the statement by Hariri. A UN tribunal recently found a Hezbollah member guilty for the murder of his father, former prime minister Rafic Hariri.

Observers believe Hezbollah and Amal are insisting on the finance ministry because the militant movements are facing pressure from US sanctions.