Another port fire in Lebanon , this time in Tripoli north Lebanon 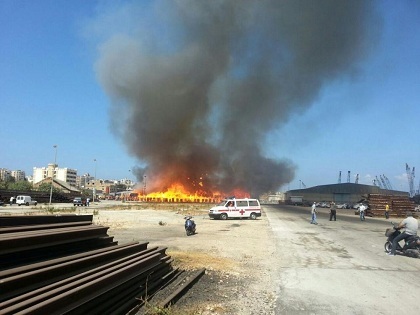 Fire broke out on Tuesday in the northern port of Tripoli
Share:

Another port fire broke out on Tuesday , but this time it took place in the northern port of Tripoli that comes after the mega explosion at the country’s major port in Beirut in August, raising eyebrows about frequent similar incidents in the country.

The fire reportedly broke out in a ship maintenance workshop outside the campus of the Port of Tripoli.

The port director Ahmed Tamer told LBCI that a gallon of paint caused the fire. but was immediately brought under control,.

Last month the Beirut Port was the scene of a major blast that destroyed a huge section of Beirut and killing about 200 people , injuring 6500 and leaving 300,000 homeless

Imports were redirected to Tripoli port for a week after the explosion.

In another development , an explosion rocked a village in southern Lebanon on Tuesday, Lebanese broadcasters and a witness said, and clouds of dark smoke rose from the area.

A number of people were reportedly injured in the blast in Ain Qana, local residents told Lebanese media.

The local media also reported that the explosion took place in a house belonging to a Hezbollah linked person.

Lebanese TV Al-Jadeed said Hezbollah and Amal movement had imposed a security cordon around the site.

In yet another development , LBC reported that a fire erupted in a paint factory in the Ouzai neighborhood, south of Beirut another Hezbollah stronghold