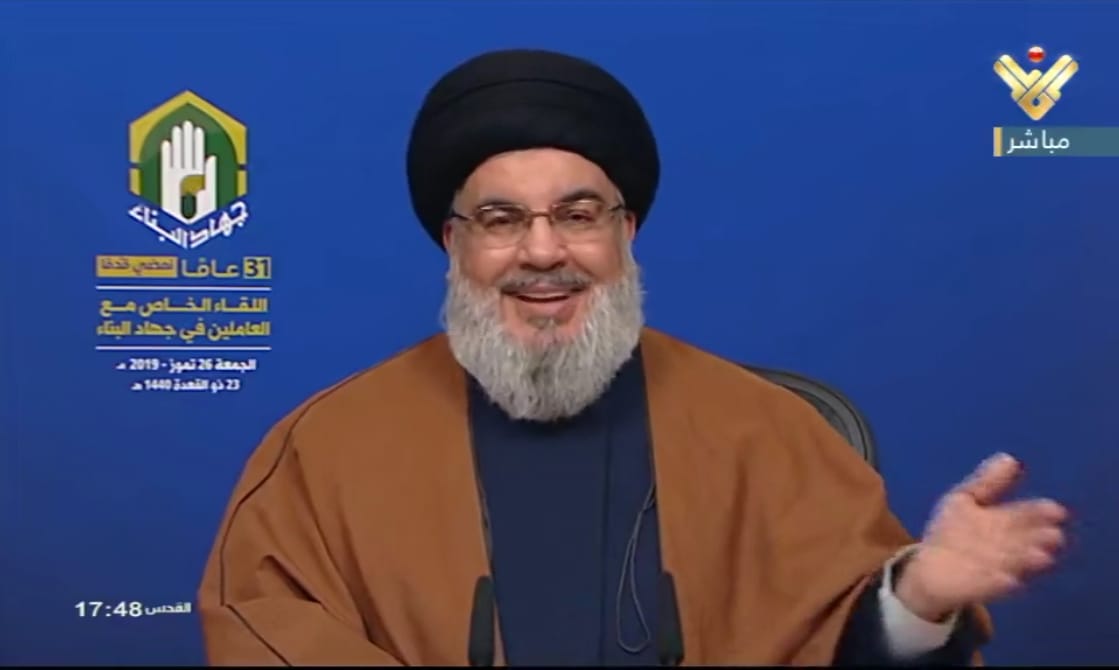 Hezbollah chief Hassan Nasrallah is shown delivering a speech on July 28, 2019 marking the 31rst anniversary of Jihad Al-Bina company Arch Consulting which was sanctioned by the US today was previously part of and continues to “provide funds to Jihad al-Bina, the prominent Hezbollah construction company designated by the United States in 2007.”
Share:

U.S. Secretary of State Mike Pompeo accused Hezbollah of “exploiting Lebanon’s corrupt system just like other parties,” as the U.S. Treasury slapped sanctions on two Lebanon-based firms and a man described as a Hezbollah official.

“Lebanon’s political leaders have long exploited the lack of transparency in Lebanon’s economy to conceal their self-enrichment, while pretending they are defending the rights of their people. Despite its claims to the contrary, the terrorist group Hezbollah is every bit as involved in this deception as other actors,” Pompeo added in a statement.

“This scheme involving political leaders directing contracts to political allies while enriching themselves is exactly the type of corruption against which the Lebanese people are protesting,” he said.

Pompeo added: “The Lebanese people have been demonstrating against corruption for nearly a year and demanding that their government address their basic needs after decades of political dysfunction. The Lebanese people deserve better, and the United States will continue to support their calls for an end to corruption and more responsive governance.”

In his statement, the top U.S. diplomat noted that “Arch Consulting and Meamar Construction are two of many companies subordinate to Hezbollah’s Executive Council.”

Hezbollah has used these companies to “conceal its economic activity and evade U.S. sanctions,” he charged.

“Hezbollah collaborated with former Lebanese Minister Youssef Fenianos to ensure that Arch and Meamar won Lebanese government contracts worth millions of dollars, and the companies sent a portion of those funds to Hezbollah’s Executive Council,” Pompeo said.

He noted that Arch Consulting was previously part of and continues to “provide funds to Jihad al-Bina, a prominent Hezbollah construction company designated by the United States in 2007.”