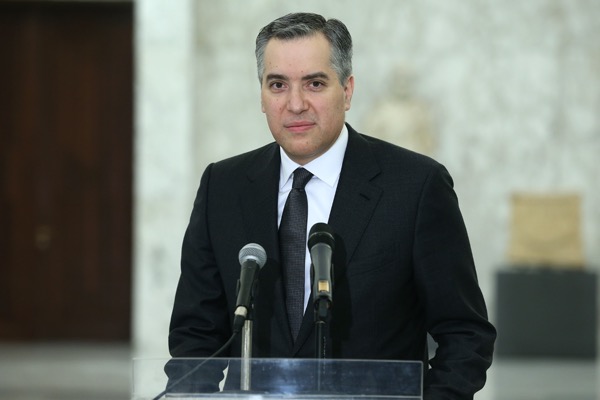 In this photo released by Lebanon’s official government photographer Dalati Nohra, Prime Minister-Designate Mustapha Adib speaks with journalists after his meeting with Lebanese President Michel Aoun, at the presidential palace, in Baabda, east of Beirut, Lebanon, Monday, Sept. 14, 2020. Lebanese officials are holding eleventh-hour negotiations over the formation of a new government, a process which hit snags over the weekend despite a looming deadline to deliver on a promise made to French President Emmanuel Macron. (Dalati Nohra via AP)
Share:

The Lebanese pound fell again against the dollar as political differences prevented the formation a new government tasked with leading the country out of its financial crisis.

Currency exchangers were selling the dollar for LL7,700 and buying it for LL7,500 about twice the rate of LL 3800 set by Lebanon’s central bank

This development comes after PM Designate missed the deadline in announcing the formation of his new cabinet.

In a blow to French efforts Amal, Hezbollah threw a wrench into Lebanon government formation.

MP Mohammed Raad the head of Hezbollah’s parliamentary block told President Michel Aoun during the cabinet consultations at Baabda that the “Shiite duo” insists on retaining the finance portfolio and on naming their own ministers in the upcoming cabinet, LBCI television reported on Tuesday.

LBCI said Berri is insisting on allocating the finance ministry for the Shiite community.

The finance ministry has been headed by Berri’s AMAL movement representative since 2014.

Adib met Aoun for talks after Berri and Aoun’s son-in-law Gebran Bassil objected to the way the cabinet was being formed. Political sources said Adib did not present a list of ministerial names as had been anticipated.

Missing Tuesday’s deadline could prove an early blow to a French effort to secure agreement from fractious politicians on reforms to root out corruption in return for foreign aid needed to resolve the worst crisis since Lebanon’s 1975-1990 civil war.

U.S. Secretary of State Mike Pompeo on Tuesday warned France that its efforts to resolve the crisis in Lebanon would be in vain without immediately tackling the issue of Iran-backed Hezbollah’s weaponry.