In a blow to French efforts Amal, Hezbollah throw a wrench into Lebanon government formation 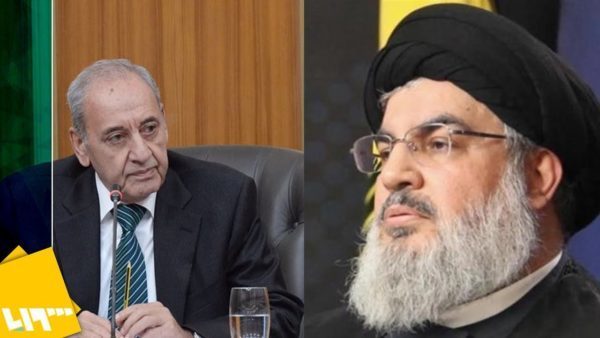 Amal Movement leader Nabih Berri L was recently reelected for the seventh time as Speaker is shown in a composed photo with Hezbollah chief Hassan Nasrallah (R) . Both parties are backed by Iran
Share:

MP Mohammed Raad the head of Hezbollah’s parliamentary block told President Michel Aoun during the cabinet consultations at Baabda that the “Shiite duo” insists on retaining the finance portfolio and on naming their own ministers in the upcoming cabinet, LBCI television reported on Tuesday.

LBCI said Berri is insisting on allocating the finance ministry for the Shiite community.

The finance ministry has been headed by Berri’s AMAL movement representative since 2014.

Prime Minister-designate Mustapha Adib met Aoun for talks after Berri and Aoun’s son-in-law Gebran Bassil objected to the way the cabinet was being formed. Political sources said Adib did not present a list of ministerial names as had been anticipated.

Missing Tuesday’s deadline could prove an early blow to a French effort to secure agreement from fractious politicians on reforms to root out corruption in return for foreign aid needed to resolve the worst crisis since Lebanon’s 1975-1990 civil war.

France’s Foreign Ministry said Lebanese politicians needed to deliver on their promise to agree on a cabinet.

“It is up to them to translate this commitment into action without delay,” spokeswoman Agnes von der Muhll said.

President Emmanuel Macron said on Sept. 1, during a visit a month after a devastating Beirut port blast, that Lebanese politicians agreed to form a cabinet in 15 days, or by Tuesday, an ambitious timeline given it usually takes months.

“The parties still have to fall into line,” a French Elysee official said.

Sources with knowledge of the meeting said Adib told the Lebanese president he would return in a few days while Aoun consulted with various factions.