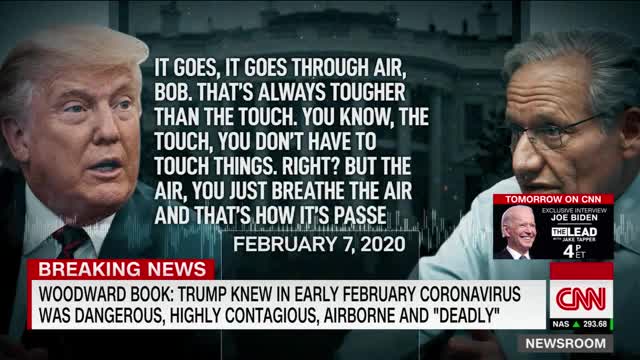 President Donald Trump talked privately about the severity of the coronavirus threat even as he was telling the nation the virus was no worse than the seasonal flu and insisting the government had it totally under control, according to a new book by journalist Bob Woodward.

“You just breathe the air and that’s how it’s passed,” Trump said in a Feb. 7 call with Woodward. “And so that’s a very tricky one. That’s a very delicate one. It’s also more deadly than even your strenuous flus.”

“This is deadly stuff,” the president repeated for emphasis. His comments were recorded by Woodward, and audio has been released.

For the White House, the book serves as an unwelcome return to a focus on Trump’s handling of the pandemic just as he is trying to project that the virus is under control and as he is eager to see a return to normal activity leading up to the Nov. 3 presidential election.

Trump told Woodward on March 19 that he deliberately minimized the danger. “I wanted to always play it down,” the president said. “I still like playing it down because I don’t want to create a panic.”

.@JoeBiden on President Trump's interview with Bob Woodward on COVID-19: "He knew and purposely played it down. Worse, he lied to the American people. He knowingly and willingly lied about the threat it posed to the country for months." pic.twitter.com/Fq00DFWP61

Democratic presidential nominee Joe Biden said the book shows Trump “lied to the American people.” He knowingly and willingly lied about the threat it posed to the country for months.”

“While a deadly disease ripped through our nation, he failed to do his job — on purpose. It was a life or death betrayal of the American people.”

“He had the information,” Biden said during a campaign event in Michigan. “He knew how dangerous it was.”

Trump tells Woodward he played down the threat of the coronavirus.
"I wanted to always play it down. I still like playing it down because I don't want to create a panic."

He also tells Woodward that "plenty of young people" are vulnerable — different from his public message pic.twitter.com/fJZUZtJTIv

Trump addressed questions about downplaying the pandemic threat at the White House.

The Washington Post, where Woodward serves as associate editor, reported excerpts of the book, “Rage” on Wednesday, as did CNN. The book also covers race relations, diplomacy with North Korea and a range of other issues that have arisen during the past two years.

The book is based in part on 18 interviews that Woodward conducted with Trump between December and July.

“Trump never did seem willing to fully mobilize the federal government and continually seemed to push problems off on the states,” Woodward writes of the pandemic. “There was no real management theory of the case or how to organize a massive enterprise to deal with one of the most complex emergencies the United States had ever faced.”

White House press secretary Kayleigh McEnany said the president’s words to the public were designed to express confidence and calm at a time of major challenges.

“The president has never lied to the American public on Covid. The president was expressing calm, and his actions reflect that,” McEnany said.

She said Trump’s actions reflect that he took Covid-19 seriously. She noted that the president put in place travel restrictions with China on Jan. 31 and said that some Democrats had criticized the move.

McEnany said “the president never downplayed the virus.” But Trump himself told Woodward that he was “playing it down because I don’t want to create a panic.”

At times, Trump’s public comments suggested he was less interested in keeping people calm than in having them ignore the reality of the coming storm. “I think the virus is going to be — it’s going to be fine,” Trump said on Feb. 10 — three days after telling Woodward privately it was “deadly stuff” and more dangerous than the seasonal flu.

Trump aides and allies said at the time said Trump was aiming to prop up the economy with his rosy take on the virus throughout February, even as his administration took few concrete steps to prepare for the coming pandemic.

“There is damning truth that President Trump lied and people died,” said Senate Democratic leader Chuck Schumer of New York. Schumer said that when he thinks about how many people in his state died, “It just makes me angry.” He added: “How many people would be alive today if he just told Americans the truth?”

“What he was actually saying is, ‘I don’t want anybody to think anything like this happened on my watch so I’m not going to call any more attention to it,’” Pelosi said on MSNBC.

Woodward’s book is his second on the Trump White House. The first, published in 2018, portrayed Trump in an unflattering light, and the president fumed at staff that he was not interviewed for it, according to former White House officials and Republicans close to the White House. They were not authorized to speak publicly about private conversations and discussed the matter on condition of anonymity.

Trump was convinced that if he had talked to Woodward, it could have led to a more favorable depiction in the book, according to the officials. Trump had always held Woodward in high regard — he considered the journalist as the biggest star in the field — and told aides that he insisted on being interviewed if Woodward were to write again, the officials said.

Several Republican senators at the Capitol declined to comment on the new book, telling reporters they hadn’t yet read it, even when informed of key passages about the virus. “I just can’t, can’t comment on it,” Sen. Rob Portman, R-Ohio.

“Could we all have done things differently? Yes, including Congress. We were all a little slow to recognize the severity,” Portman added.