Macron backs free speech for Charlie Hebdo but not for reporter 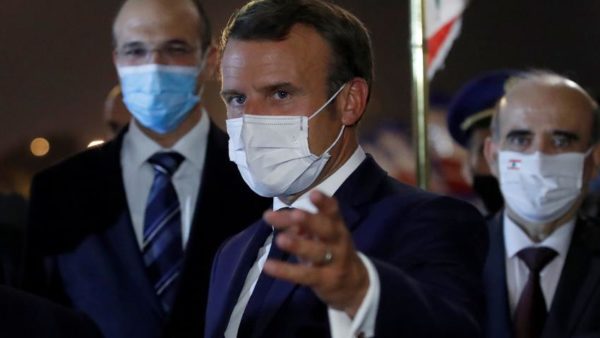 French President Emmanuel Macron on Wednesday faced accusations of trampling on press freedom after he personally berated Le Figaro’s Georges Malbrunot, a prominent reporter over an article the head of state described as “unprofessional and mean”.
Share:

Hours after the French leader defended Charlie Hebdo’s right to publish offensive cartoons of the Prophet Muhammad, he launched an angry tirade against a journalist who published an unflattering story.

French President Emmanuel Macron is being accused of hypocrisy after an angry outburst targeting a journalist was caught on camera.

The French leader was heard chastising Le Figaro’s Georges Malbrunot as “unprofessional and petty” after the reporter’s scoop on Macron’s meeting with Hezbollah figures during his visit to Lebanon.

Malbrunot had written about how Macron had expressed his desire to work with the Shia movement despite its proscription as a terrorist organisation by key allies, such as the US, UK, and Germany. France itself considers the organisation’s armed wing as terrorist.

Many on social media pointed out that the meltdown over the report stood in stark contrast to comments made by the French president just hours earlier.

Macron refused to condemn the reprinting of cartoons mocking the Prophet Muhammad, stating it was not right for a political leader to get involved in editorial matters.

“It’s never the place of a president of the Republic to pass judgment on the editorial choice of a journalist or newsroom, never. Because we have freedom of the press,” he said.

A visibly seething Macron walked away with bodyguards after the encounter and Malbrunot did not appear to respond. On his Twitter account, the journalist has not directly addressed the incident but did share criticism of the French president’s behaviour.

“In the morning, (Macron) proclaims freedom of press and the ‘right to blaspheme’ and in the afternoon he yells in public like a rotten fish at a journalist, who had done his job well,” said one of Malbrunot’s supporters.

Another supporter said that the French president cannot tolerate journalists writing “truths that he does not like”.

Macron has faced separate criticism over his involvement in Lebanese domestic affairs. The president was quickly on the scene after an ammonium nitrate explosion destroyed or damaged much of Beirut.

Many Lebanese people lauded his criticism of the political class, who they hold responsible for the disaster due to their corruption and governmental neglect.

A month later, Macron has been dealing with the very same politicians in an attempt to establish a new government in the coastal Mediterranean state. That has led many to conclude that the French leader is acting in the interests of publicity rather than the Lebanese people.

Freedom of the press

TRT World spoke to Yasser Louati, the head of the Justice and Liberties for all Committee (CJL), about press freedom in France.

Louati, a whistle blower who has long campaigned against racism and police brutality in France, said he himself had faced ‘judicial harassment’ over his activities.

He described Macron as having benefited from “overwhelmingly positive media coverage” prior to becoming president and taking issue when such coverage slowed down or changed tone.

“Macron’s outburst towards George Malbrunot is the umpteenth sign of hypocrisy with regard to the former,” Louati said, adding:

“He can support Charlie Hebdo when it publishes racist cartoons against ethnic minorities like Muslims and immigrants, he can support the likes of Eric Zemmour (a far-right columnist), he can give a special interview to a far right magazine like Valeurs Actuelles, but he is offended when journalists publish news he wants to conceal or analysis he disagrees with.”

Louati stressed that people should not see the episode as exceptional, arguing that the government under Macron had a strong track record when it came to restricting press activity.

He pointed to Macron’s involvement in the Benalla affair, in which an aide to the president, Alexandre Benalla, dressed in police uniform and riot gear to attack May Day protesters.

Macron’s response to media scrutiny of the event was to accuse them of not wanting to “seek the truth”.

When the French outlet, Mediapart, got a hold of recordings of Benalla discussing the case, Macron’s prime minister, Edouard Phillipe ordered prosecutors in Paris to raid the outlet’s offices.

Louati also described further incidents, such as the intimidation by French intelligence agents of journalists who revealed the use of French weapons against civilians in Yemen.

As Louati outlined, the outburst against Malbrunot is not an isolated example. Under Macron and his predecessors, the French government has clamped down violently against opposition protesters and imposed sometimes arbitrary restrictions of free speech.

As of November 2019, 24 Yellow Vest activists had been either fully or partially blinded by police after taking part in protests against Macron’s economic policies. Another five had lost their hands and at least 11 deaths have been linked to the unrest.

In January 2015, after the deadly Al Qaeda attack on the Charlie Hebdo offices, the comedian Dieudonne was arrested for making fun of the ‘Je suis Charlie’ slogan that became widespread following the event. That same month, a French mayor banned the showing of the Oscar-nominated film, Timbuktu, over the baseless claim that it promotes terrorism.

France also has a track record of criminalising pro-Palestinian activism. In January 2020, the European Court of Human Rights ruled that the conviction of 12 BDS activists violated their right of free expression.

The court ordered French authorities to pay the activists more than 27,000 euros in compensation each and warned that the country could not limit speech that did not incite violence, hatred, or intolerance.