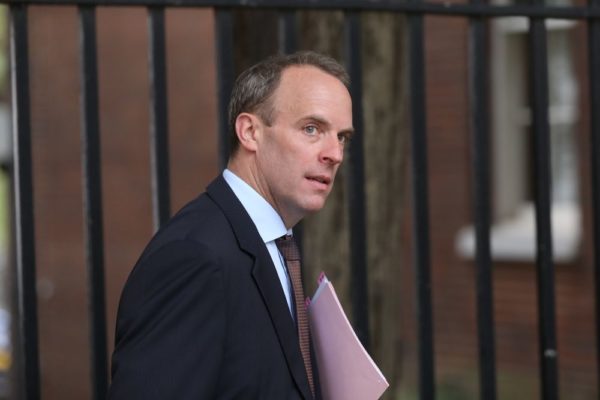 Britain’s foreign secretary on Tuesday said Iran was working with Hezbollah and Hamas to foment instability throughout the Middle East, as legislators pressed for Britain to support reimposing sanctions on Tehran.

Dominic Raab was answering a question from Tom Tugendhat, a fellow Conservative and chairman of the House of Commons foreign affairs select committee.

Mr Tugendhat had said that every country had the right to restore sanctions if Iran was breaking the 2015 nuclear deal between Tehran and world powers.

The mechanism for “snapping back” the sanctions was enshrined in the deal.

Mr Raab said the issues posed by Iran went beyond the agreement, which curbed Iran’s nuclear ambitions in return for the lifting of sanctions.

“He is absolutely right also to point to the role that Iran plays, not just with its own activities it engages with directly, but also with Hamas and Hezbollah and other proxies throughout the Middle East as a source of tension and instability,” he said.

“We are working with all our allies to try and make sure, limit and hold to account Iran for these activities.”

The head of the newly merged Foreign Commonwealth and Development Department said the 2015 Joint Comprehensive Plan of Action agreement was not designed to contain Iran across the region.

“It has always been the case that the [nuclear deal] did not encompass the wider destabilising activities that Iran engages in the region,” Mr Raab said.

“We’ve always been open and willing and indeed pressing to try and incorporate a bigger agreement.

“Until we’ve got scope for that wider agreement, the JCPOA is what we’ve got.

“It provides a vehicle for some kind of restraint on Iran although I accept that it has been eroded because of systemic non-compliance and we’d be reluctant to move to something bigger until it is in place.”

Mr Raab met the Bahraini Foreign Minister, Abdullatif Al Zayani, on Monday to discuss regional issues, including the effect of next month’s expiry of the weapons embargo on Iran.

Mr Al Zayani, a former secretary general of the GCC, issued a plea to governments including Britain on the UN Security Council to ensure problems in the region were not inflamed by an increase in the flow of arms to Tehran.

“We hope that governments will understand and appreciate we have a potential opportunity not to provide more arms for militias in the region,” he told The National.

Britain joined a dozen other members of the UN Security Council to vote down a proposal by the US to extend the ban on Iran acquiring more missiles and other weapons.

Mr Raab made it clear that London would stick with its policy of supporting a moratorium that achieved consensus backing from all the members of the Security Council.

“If time had been allowed from the original tabling of the [proposed US] resolution between a vote, we had offered, with the E3, to work with all the permanent members of the Security Council to try to find a compromise,” he said.

“Ultimately, I just have to say unless the resolution can pass, it has no impact in restraining Iran.”

Mr Raab also said both sides had legal arguments to support their positions on how to respond to the nuclear deal breaches by Iran.

“Lawyers will always have different views on the precise permutations but I think the position on snapback in relation to the [nuclear deal] is tolerably clear,” he said.

In this he received the backing of the former US co-ordinator for the deal under US president Barack Obama, Jarrett Blanc, who is now at the Carnegie Endowment for International Peace.

“This is also what last year’s memo from the state legal adviser said: there is a legally available argument, he responded on Twitter.

“The memo circulated to UNSC memos in August was more polemical.”