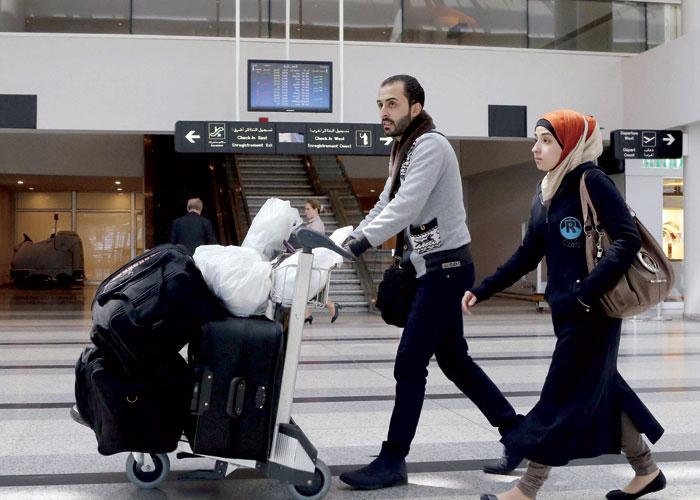 After a decline in emigra­tion levels ushered in by economic growth that marked the pre-2005 years, Lebanon has gone back to unwittingly exporting its smartest and most educated youth.
Share:

About 380,000 Lebanese are said to be considering departing their home country in the context of the ongoing economic and political meltdown. There are few families in Lebanon who don’t have relatives abroad, so networks already exist to expedite migration.

Such a wave of emigration would have a brutal impact, since it would be disproportionately composed of high-flying graduates. Lebanon’s outstanding healthcare system will be particularly hard hit if hundreds of doctors seek careers overseas.

“I don’t want to leave. Even if I must stand in front of the tanks of your disappointments, your ignorance and your trash. Even if my body is squashed upon the floor like a dead cat crushed by a car, I’m better off. I’m from this land, and we’ll ensure that you depart beforehand, so – Revolution!”

I’m loosely translating a snippet of poetry sent to me that encapsulates the attachment many Lebanese feel toward our homeland. Nobody wants to start from nothing in a strange, foreign land. Yet young people struggle under a corrupt, clientelist system that refuses to reward and incentivize their contributions.

If Prime Minister Mustapha Adib shuns the usual roster of crooks and cronies to bring talented, independent technocrats into his Cabinet, perhaps there is an opportunity to put matters right. But if this incoming administration feigns independence while remaining beholden to corrupt factions, this will fool nobody — certainly not the International Monetary Fund.

The World Bank has just cancelled $244 million in loans for a dam project, due to the regime’s failure to implement its obligations. How does Lebanon expect to attract billions of dollars of new financial support if its leaders can’t competently deploy funds already promised?

In the ceremony marking a month since the port explosion, the 190 candles for those who died embodied the fatal consequences of our leadership’s failings. We have long since passed the self-imposed deadline to hear the outcomes from President Michel Aoun’s investigation into the circumstances of this explosion. We can’t help but interpret this as the regime’s clumsy attempts to cover up evidence of its own criminal incompetence.

During the 1970s, Lebanese icon Fairuz famously sang: “France, what should I tell you about my wounded country?” It may never be precisely disclosed what she told Emmanuel Macron about her wounded nation, but after their recent meeting the French president commented: “I made a commitment to her, as I make a commitment to you here tonight, to do everything so that reforms are implemented and that Lebanon receives better. I promise you, I won’t leave you.”

President Macron, we pray that you follow through on these promises, and that when our leaders fail us again you will indeed impose sanctions upon them — naming and shaming them. Your intelligence services inevitably know their secret bank accounts, the volumes of stolen wealth, and the channels exploited to launder ill-gotten gains.

France is also well aware of Hezbollah’s misuse of Lebanon’s ports, airport and borders for smuggling arms, narcotics and other contraband goods. Although UNIFIL’s mandate was recently expanded, the Trump administration forced through a cut in its troop numbers. How can Hezbollah be confronted when those mandated to do so have their hands tied behind their backs?

Historically, Lebanon’s intellectuals and cultural heavyweights exerted a commanding influence on the nation’s trajectory. Lebanon isn’t the miserable darkness in which the incompetent thieves in our governing classes seek to trap us. We don’t belong within Hezbollah’s axis of fear and ignorance. We need our best minds to trample these sectarian, retrogressive ideologies underfoot and offer an enlightened alternative that guarantees Lebanon’s sovereignty and independence.

It shouldn’t be a question of choosing between the Iranian or French camps — we need a patriotic Lebanese camp, transcending sect and faction. In this nation of minorities, no single faction alone can prevail. Rather than this leading to perpetual stalemate, this must be a recipe for political creativity, rethinking our constitution and governing model. The demand for early elections is crucial, but elections won’t win themselves. The protest movement must establish a non-sectarian, non-complicit formula of political representation if there is to be any alternative to the status quo.

We should take a lesson from the Palestinians. Their absence of leadership and failure to mobilize a new intifada in response to Trump’s giveaway of Jerusalem fed into Jared Kushner and David Friedman’s vision for handing much of the West Bank to Israel. I’m a lifelong supporter of Palestine, but we can’t expect the world to help us unless we help ourselves by taking to the streets and forcing Lebanon’s kleptocratic regime to radically change direction.

I speak as someone who departed Lebanon with my young family after the 1982 Israeli invasion. Not a day goes by when I don’t wish I’d been able to remain. The great Lebanese émigré poet Michel Noeima wrote movingly of his own sense of rootlessness in exile: “Dear brother, who are we? Without a neighbor, kin or country. We sleep and we wake clad in shame.”

The failure to create a meritocratic system that rewards our most deserving is one of the most glaring failures of this clientelist regime that belongs in the dustbin of history. Before our brilliant graduates in law, finance, engineering and physics embark on a ship for Washington or Paris, perhaps they should think the unthinkable and embrace a career in politics as MPs, civil servants, and civil society activists, to confront the systematic failings that forced them to consider emigration.

If Lebanon is to survive this backbreaking confluence of crises, patriotic young people must be offered genuine hope that their best prospects lie in investing their talents and passions in their motherland.