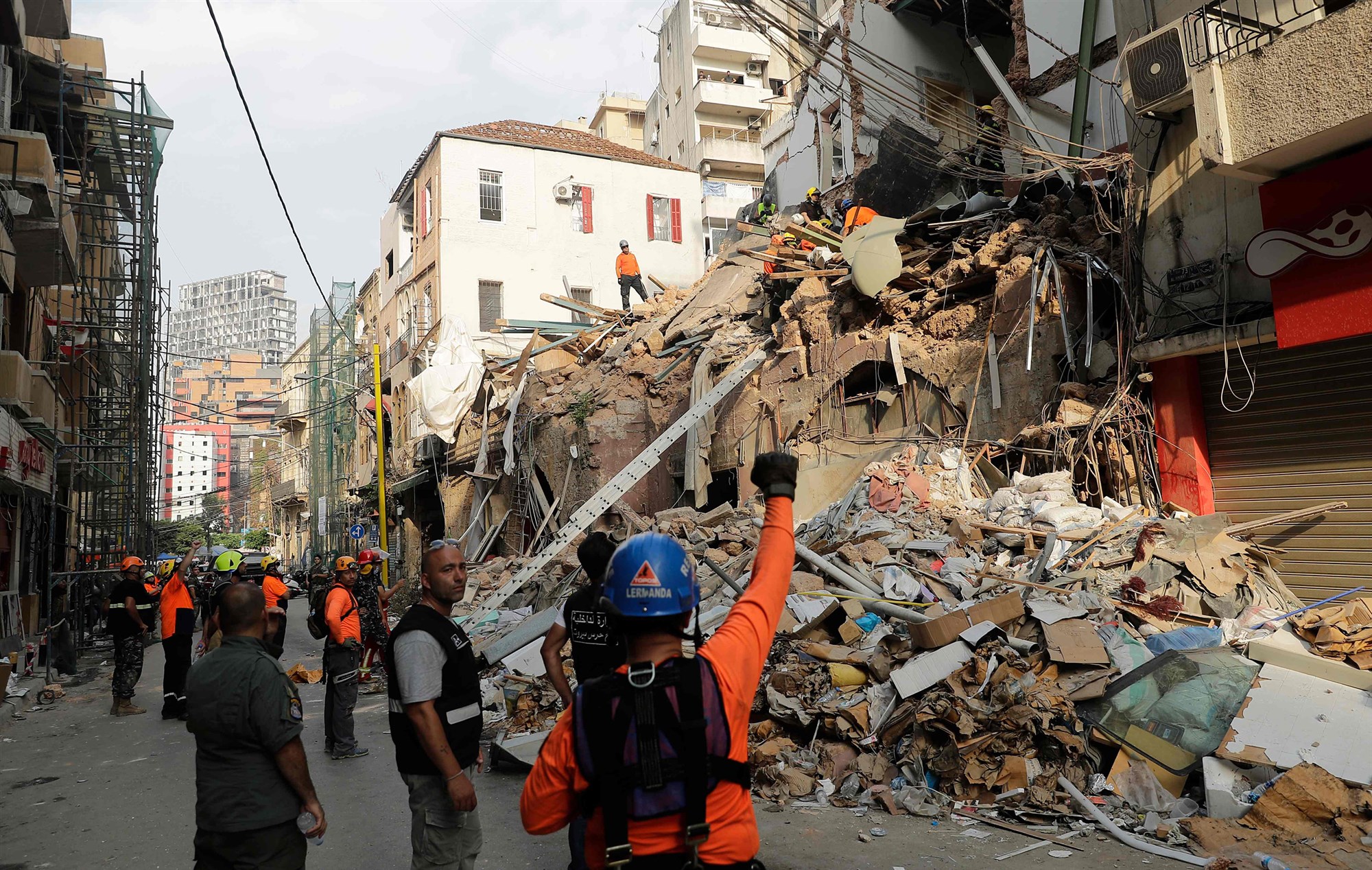 Rescue workers dig through the rubble of a badly damaged building in Lebanon’s capital Beirut, in search of possible survivors after scanners detected a pulse on Thursday. Joseph Eid / AFP – Getty Images
Share:

BEIRUT — A pulsing signal was detected Thursday from under the rubble of a Beirut building that collapsed during the horrific port explosion in the Lebanese capital last month, raising hopes there may be a survivor still buried there.

The effort unfolded after the sniffer dog belonging to the Chilean search and rescue team first detected something as the team was going through Gemmayzeh Street in Beirut and rushed toward the rubble of a building. The street was one of the hardest-hit in the Aug. 4 explosion.

The team then used audio detection equipment for signals or heartbeat, and detected what could be a pulse of 18 to 19 beats per minute. The origin of the pulsing signal was not immediately known but it set off a frantic search and raised new hope.

It is extremely unlikely that any survivors would be found a month after the blast that tore through Beirut in August when nearly 3,000 tons of ammonium nitrate ignited at the port. The explosion killed 191 people and injured 6,500 others and is considered to be one of the biggest non-nuclear explosions ever recorded. Thousands of homes were damaged.

“Ninety-nine percent there isn’t anything, but even if there is less than 1 percent hope, we should keep on looking,” said Youssef Malah, a civil defense worker. He said his men would continue working throughout the night, adding that the work was extremely sensitive.

A Chilean volunteer, however, said their equipment identifies breathing and heartbeat from humans, not animals, and it detected a sign of a human.

For days, a French rescue team and other volunteers had looked into the rubble of buildings in the aftermath of the explosion and didn’t have reason to believe there were any bodies or survivors left.

In another chilling reminder of the horrific explosion a month ago, the Lebanese military said it discovered more than 4 tons of ammonium nitrate near Beirut’s port on Thursday.

According to the military, army experts were called in for an inspection and found 4.35 tons of the dangerous chemical in four containers stored near the port. There were no details on the origin of the chemicals or their owner.

The military statement said that customs officials had called in the army to inspect containers at a facility near the port, where they found 4.35 tons of ammonium nitrate. It said army experts were “dealing with the material,” an apparent reference that it was being destroyed.

Days after the Aug. 4 blast, French and Italian chemical experts working amid the remains of the port identified more than 20 containers carrying dangerous chemicals. The army later said that these containers were moved and stored safely in locations away from the port.

French experts as well as the FBI have taken part in the investigationinto the blast, at the request of Lebanese authorities. Their findings have yet to be released.

So far, authorities have detained 25 people over last month’s explosion, most of them port and customs officials