Schenker in Beirut. plans to ignore politicians and talk to civil society groups 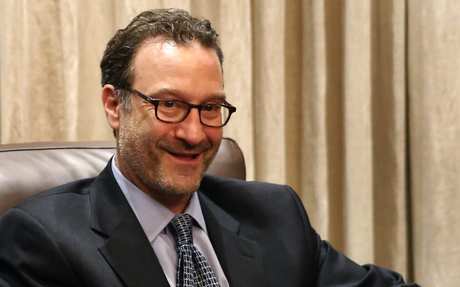 US Assistant Secretary of State for Near Eastern Affairs David Schenker
Share:

US Assistant Secretary of State for Near Eastern Affairs David Schenker arrived in Beirut Wednesday evening and said that he has “no intention to meet with any politician” but is here  for talks with civil society groups, in an apparent snub to the ruling political class.

Schenker called upon the Lebanese government to be transparent in its investigation into the explosion,. He told Asharq Al-Awsat in comments published Tuesday night that many officials knew for a long time about the existence of the thousands of tons of ammonium nitrate that exploded, killing at least 190 people and injuring 6,500 more.

“It will no longer be business as usual,” he added.

While shunning Lebanese politicians during his trip, Schenker also told Asharq Al-Awsat that “the Lebanese government does not feel any sense of emergency from the suffering of the Lebanese people.”

He citied as evidence of this the inability of caretaker Prime Minister Hassan Diab’s government to progress in negotiations with the International Monetary Fund for a bailout that would help stabilize the economy and national currency, which has lost 80 percent of its value in under a year.

“Lebanon did not start negotiating with the IMF, because Hassan Diab’s government, which spent about 200 days in power … kept talking about issues with the fund and did not reach a decision on the [scale of] Lebanese debt and the economic situation,” Schenker said.

On Mustapha Adib’s designation as Lebanon’s new prime minister, Schenker said that the US is “not concerned with personality” but that it is concerned with “principles, transparency and accountability.”

“Diab’s government did not undertake any reform, perhaps because of active political opposition, but this must change,” he added.

Schenker noted that Hezbollah was a “large part of the problem [and] stands in the way of reform,” preferring, he said, to defend Iran and undermine the authorities and financial stability of Lebanon by smuggling and not paying customs taxes.

He reiterated that the US is working on imposing sanctions on Lebanese individuals who cooperate with Hezbollah and that investigations are ongoing into the targets of those sanctions. Schenker added that Lebanon should implement a position of neutrality in its foreign policy and that the US is also “working on this matter.”