Macron to meet Fairuz, as France says Lebanon risks disappearance as a state 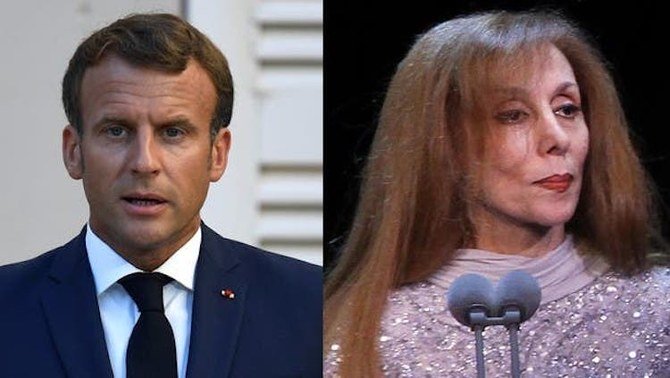 French President Emmanuel Macron will next week meet iconic singer Fairuz and members of Lebanon’s political leadership as he returns to the country in search of serious reform in the wake of the devastating Beirut port blast, the Elysee said Friday.

Macron will be in Lebanon on Monday and Tuesday for his second visit in less than a month after the August 4 blast at the Beirut port that killed 181 people and revived calls for radical change in the country.

One of his first meetings after arriving on Monday will be with Fairuz, one of the rare figures in Lebanon who is admired across the multi-confessional country, the Elysee said.

Fairuz, 85, is famously private and rarely seen in public but throughout her career has roused fans with her songs about love and in praise of the beauty of her troubled nation.

Karim Emile Bitar, a political science professor in France and Lebanon, tweeted Friday it was an “excellent decision” by Macron to meet Fairuz, describing her as “arguably the most iconic, dignified and consensual Lebanese figure.”

Macron will meet political leaders at the presidential palace on Tuesday with the aim of encouraging movement in a political process already mired in stalemate.

“He won’t let go,” said an Elysee source, who asked not to be named.

“The purpose of his visit is clear: to push for the conditions to be met for the formation of a government that is capable of carrying out reconstruction and reforms,” added the source.

Premier Hassan Diab’s cabinet has resigned over the blast, which was blamed on a store of ammonium nitrate left for years in a port warehouse despite warnings.

Macron’s arrival Monday will coincide with the start of parliamentary consultations on the choice of a new prime minister.

But France has made clear its patience is far from limitless; Foreign Minister Jean-Yves Le Drian warned Thursday that Lebanon risked “disappearing” as a country unless serious reforms are undertaken.