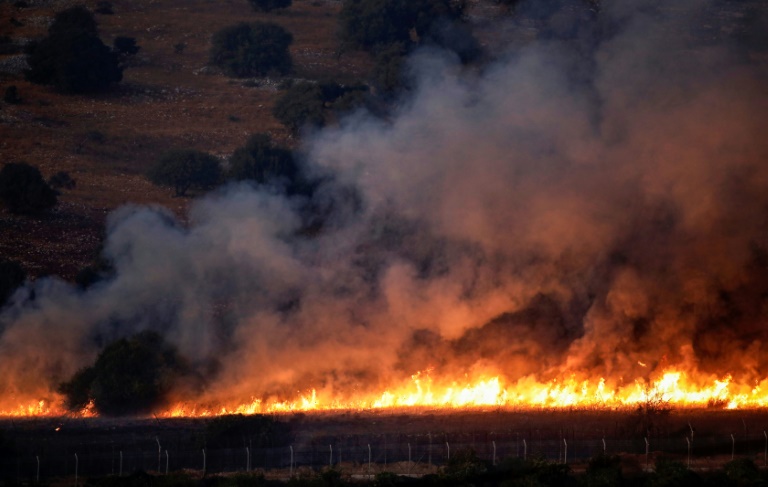 The Israeli military struck what it said were posts belonging to Lebanon’s Shi’ite Hezbollah group on Wednesday after shots were fired at troops in Israel, in a flareup that added to already high tensions along the frontier.

Lebanon’s Supreme Defence Council denounced what it called “an Israeli assault” and said a complaint would be filed to the United Nations.

The Israeli military said a Hezbollah squad in southern Lebanon fired at Israeli forces late on Tuesday, causing no casualties, and accused the group of deliberately operating near a U.N. peacekeeping post and putting personnel inside at risk.

“In response, overnight, IDF attack helicopters and aircraft struck observation posts belonging to the Hezbollah terror organisation in the border area,” the military said in a statement, referring to the Israel Defense Forces.

The Lebanese army said on its Twitter account that Israeli helicopters had fired missiles at centres of a local environmental group.

No casualties were reported on either side of the frontier. On Wednesday morning, the Israeli military told Israelis living near the border, who had been initially instructed to remain indoors, that they could resume normal activities.

Hezbollah leader Hassan Nasrallah said what happened in southern Lebanon on Tuesday, an apparent reference to the Israeli strikes, was an “important and sensitive” matter.

Speaking in a televised speech on Al-Manar TV on Wednesday, Nasrallah said he had nothing further to say on the incident, but planned to comment later, without giving further details.

Israel and Iranian-backed Hezbollah last fought a war in 2006, and border tensions have been running high in recent weeks.

Last month, Israel said Hezbollah had carried out an infiltration attempt, which the group denied.

The killing of a Hezbollah fighter in an Israeli air strike in July in Syria, where it operates in support of President Bashar al-Assad, has raised Israeli concern about retaliation.

Briefing reporters on the latest flareup, Lieutenant-Colonel Jonathan Conricus, an Israeli military spokesman, said: “It is our assessment that the choice of location by Hezbollah (for the sniping attack) was not accidental … probably in order to (draw) Israeli retaliation towards a U.N. position or near it.”

Witnesses in south Lebanon said Israel had fired scores of flares at border villages during the night-time incident.