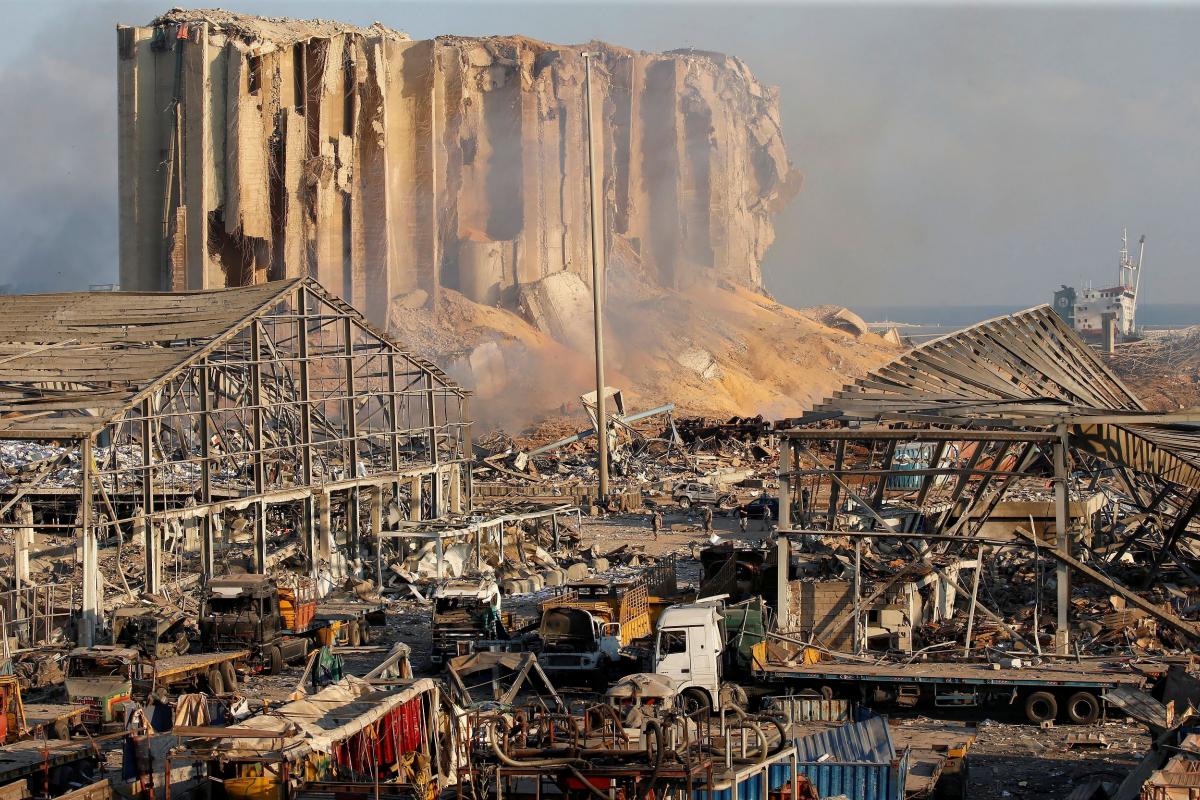 The massive explosion that tore through the port of Beirut on the evening of August 4 left more than 200 people dead, 6,000 injured, and a quarter of a million homeless. In the frenzied hours afterward, as residents of Lebanon’s capital tended to the injured and combed the rubble for survivors, many initially believed the blast to have been an act of war or terrorism. It was a natural assumption: most Lebanese have far more experience with air strikes and car bombings than with industrial disasters.

The consensus that the explosion was, in fact, an accident—likely caused by a fire that ignited 2,750 tons of ammonium nitrate warehoused at the port since 2013—has come as a shock to many. Customs officials, judicial authorities, and security forces had bickered and traded blame for years about what to do with the dangerous material. But though the blast may not, technically, have been deliberate, its deeper causes have everything to do with Lebanon’s history of conflict, with the aging former warlords who still hold power in the country, and with its dysfunctional sectarian political system.

In response to the tragedy, Lebanese leaders are resorting to a strategy they have honed over decades: blame other politicians and factions, a corrupt system outside their control, and, if all else fails, outside forces and agitators. “I am not responsible,” Lebanese President Michel Aoun declared days after the explosion. “I have no authority to deal directly with the port,” Aoun continued, before suggesting that the disaster was caused by “foreign interference.”

Bahaa Hariri, a Sunni leader and son of former Lebanese Prime Minister Rafiq Hariri, blamed Hezbollah, the Shiite militia and political party, claiming that “nothing goes in and out of the port or the airport without them knowing.” Hezbollah’s leader, Hassan Nasrallah, sharply rejected the accusation in a televised address, warning his adversaries against trying to “start a battle” with the group based on the disaster. As other politicians followed suit, denying responsibility, pointing fingers, and issuing flimsy platitudes, Lebanese grew more furious at their political class—and at the fact that in the early days after the explosion, none of their leaders ventured into the devastated neighborhoods where grieving families were burying their dead and trying to salvage belongings from their destroyed homes.

One important political leader did visit, and did not try to pass the blame, but he happened to be the president of France. Two days after the explosion, while Lebanese politicians remained out of view in their fortified palaces, French President Emmanuel Macron surveyed the

damaged port and comforted residents of ruined neighborhoods. Macron’s populist style (at one point, he jostled a bodyguard so he could hug a crying woman) and his implied criticism of Lebanon’s ruling elite were not lost on Beirut residents. By the time Macron returned to Paris, more than 50,000 people had signed an online petition urging him to “place Lebanon under French mandate for the next 10 years.”

The Lebanese elite are too invested in the system to change it.

The call for France to reimpose colonial subjugation over Lebanon misses an important historical irony: the post–World War I French Mandate saddled Lebanon with its sectarian political system, which was originally intended to protect the country’s Christians. Lebanese elites preserved the complicated power-sharing arrangement when the country gained independence in 1943, agreeing always toselect a Maronite president, a Sunni prime minister, and a Shiite Speaker of the parliament. Seats in the parliament were initially divided on a six-to-five ratio of Christians to Muslims, then further partitioned among 18 officially recognized sects. The system became one of the root causes of the civil war, which lasted from 1975 to 1990, and a way for sectarian leaders to divide and share spoils. (At the end of the war, parliament was expanded and seats were divided equally between Muslims and Christians.)

Thanks to the confessional system, Lebanese political institutions were stymied and the country remained dependent on a handful of sectarian leaders who usually inherited rule from their fathers. After the civil war, former militia leaders took control of various government ministries and public institutions and extended their patronage networks into the bowels of the state. Government jobs, contracts, and other resources are still allocated by sect—a process known in Arabic as muhasasa.

Since the political system is based on consensus, no decisions can be made without the consent of all. (The standard Lebanese political mantra is that there can be “no victor and no vanquished.”) The result is permanent gridlock, punctuated by periodic acts of violence. Decisions can’t be made in the arena of politics, and so they are sometimes fought out on the streets. That encourages parties and factions—especially leaders of the three major sects: Sunni, Shiite, and Maronite—to enlist the help of external patrons in order to vanquish their rivals, a dynamic that has kept Lebanon weak and dependent on foreign powers. Syria, Iran, Saudi Arabia, the United States, and France have all vied for influence in Lebanon since the civil war ended in 1990. And despite their rhetoric to the contrary, these countries have resisted any large-scale change to the system that would leave them with less leverage. For their part, the Lebanese elite are too invested in the system to change it.

If ever there was a moment to upend Lebanon’s sectarian system and entrenched rulers, this is it. As the scope of the devastation—and the degree of official negligence that allowed the explosion to occur—became clearer, tens of thousands gathered on Martyrs’ Square in downtown Beirut on August 8, cheering and taking selfies as cardboard effigies of Lebanon’s president, prime minister, and Speaker of the parliament were hanged on a makeshift gallows.

Anger over the explosion could revive a popular uprising that began in October 2019, after the Lebanese government announced a series of austerity measures. Without a single strongman or ruling family to focus their anger on, Lebanese protesters adopted the slogan “All of them means all of them.” These dozen or so civil war–era leaders have been unwilling to step aside and hand authority to a new generation. Instead, they concentrate power among cronies, plunder the country’s resources, pass on seats in the parliament to their children, and continue to appeal to sectarian identity. When they fail to carry out reforms or provide basic government services, these sectarian leaders blame outside actors and regional powers and claim to be true champions of change who are tragically being thwarted by a corrupt structure. In this circular system that allows every leader and faction to pass the blame, there is no accountability, even when the country suffers a tragedy on the scale of the port explosion.

Reconstructing the areas damaged by the blast could cost up to $15 billion and is likely to accelerate an economic collapse in Lebanon that coincided with last year’s protests. Since October, the Lebanese pound, which had been pegged to the dollar since 1997, has lost 80 percent of its value on the black market. The currency collapse, along with a lack of dollars, has led to soaring food prices and shortages of imported goods. The government is struggling to pay its debts and has failed to provide basic services such as electricity, water, and garbage

There’s little hope of a foreign bailout, as Lebanon’s traditional supporters, including the European Union and Gulf states such as Saudi Arabia and Qatar, are shying away from providing more aid. Foreign backers are finally demanding that Lebanese leaders begin making reforms that would ultimately weaken their grip on power and undermine the sectarian system: reducing the bloated public payroll and combating corruption. In May, the Lebanese government requested a $10 billion loan from the International Monetary Fund, but negotiations have stalled because of infighting between government officials and the country’s central bank over reforms and IMF demands for a forensic audit of the bank’s accounts.

With their intransigence, Lebanon’s sectarian leaders have made it clear that they don’t care if the economy collapses and the country is destroyed. Their highest priority is protecting themselves and their cronies. Is there an alternative to the sectarian oligarchs? Though the protest movement that emerged last year has built cross-sectarian alliances, it is largely leaderless. It is also far from building the organizational structure and get-out-the-vote apparatuses of the established, sect-based groups including Hezbollah; the Future Movement, a Sunni party led by Saad Hariri, a former prime minister and another son of Rafiq Hariri, the ex-premier who was assassinated in 2005; and the Free Patriotic Movement, a largely Maronite party founded by Aoun, the president, and now led by his son-in-law Gebran Bassil.

Even a new government and new political parties will not be enough to save Lebanon.

Moreover, the sectarian parties have an inherent advantage over nascent nonsectarian movements because the country’s political system hinges on creating clientelist networks and distributing resources, especially to meet government shortfalls. Lebanese are dependent on their sectarian leaders and parties not just for jobs but also for social services, such as health care, schooling, and food aid. The parties fill the gap left by a weak central government that is corrupt and inefficient at providing basic services.

The port explosion and ensuing backlash toppled the government of Prime Minister Hassan Diab, which took office in January after popular protests forced Hariri, the country’s top Sunni politician, to resign. Diab announced his resignation on August 10, and his cabinet will continue in a caretaker capacity until a new government is formed, which could take months. The fall of Diab’s cabinet will not change Lebanon’s trajectory—it will lead to a game of shifting blame and musical chairs, as the sectarian leaders and parties that have dominated Lebanese politics for decades appoint yet another government. Days before he resigned, Diab suggested that he would would ask parliament to shorten its term and call early elections. That would meet a central demand of last year’s protests, which also called for Aoun to resign as president and for Shiite politician Nabih Berri to step down as the longtime Speaker of the parliament. (Both men were major figures in the civil war: Aoun was commander of the Lebanese army, while Berri was leader of a Shiite militia.) This might have hastened Diab’s fall: the Lebanese press reported that Berri was outraged by the premier’s call for an early vote and put pressure on ministers to resign to hasten the cabinet’s collapse. Lebanon’s sectarian leaders are not going to reform themselves out of power. They will hang on by whatever means necessary, as they did during the civil war.

Many of the established sectarian parties, including Hezbollah and its allies, opposed the call for an early vote. The last election was held in May 2018, and the parliament is supposed to serve until 2022. But even if the protesters can force an early election, it’s not clear that would produce a significantly different 128-member legislature. The sectarian leaders and parties excel at using Lebanon’s byzantine election laws to their advantage. In the last election, politicians claimed that a new system of proportional representation—in place of a winner-take-all scheme—would allow civil society groups and independents to compete against the established parties. But the sect-based parties won virtually all the seats, and voter turnout was under 50 percent.

The tragedy in Beirut—the result of decades of systemic negligence and lack of accountability—made clear that a new government, parliamentary elections, and new political parties will not be enough to save Lebanon. The Lebanese must rid themselves of the corrupt sectarian leaders and parties that have dominated the country for decades. And they must destroy the sectarian power-sharing system that has turned into a noose around their necks.